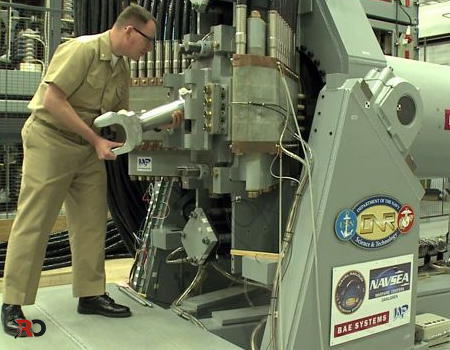 The US Navy announced in April 2014 that it planned to install and test a prototype electromagnetic railgun aboard a joint high speed vessel by 2016.[1] This announcement also included the unveiling of the futuristic weapon that has been under development for some time.[2] This was the first time an electromagnetic railgun (EMRG) was demonstrated, symbolizing a significant advance in military technology. Successful tests of an electromagnetic railgun marked the latest milestone in a decades-long development program. Though daunting challenges remain, the eventual deployment of such a system will have profound implications for warfare. The technology to build EMRGs has existed for two decades – and the theory has been around even longer. However, serious technical hurdles still remain, but the implications of a deployable EMRG are immense.

An EMRG is a different type of gun. Whils

t conventional guns rely on an explosive propellant that ignites and causes gases to expand in the gun barrel, driving the projectile (object) forward. An EMRG is a completely different concept – it uses electrical energy to propel a projectile at high speed. One major advantage over traditional guns is the projectile travels much faster than a conventional round. The velocity of an EMRG is around Mach 7, compared to Mach 2 for current US naval guns. (Mach 1 is the speed of sound – 761 mph). This increase in speed dramatically increases range and lethality. Current naval guns are limited to a range of about 20 nautical miles, although improvements may double that, whereas the range of EMRGs is around 250 nautical miles. An object moving at such speed will be extremely destructive just from kinetic energy alone and would not need gunpowder or an explosive warhead. The ammunition required is also much smaller and safer to handle and store because an EMRG round does not need to contain a propellant or explosive warhead to detonate when it reaches its target. In short, EMRGs offer order-of-magnitude improvements in range and lethality while reducing the size, weight and hazardous nature of ammunition.

These monumental leaps in capability come at a price. EMRGs have been in development for decades because the energy needed to power such a weapon was not available. The US Navy’s next-generation destroyer, USS Zumwalt DDG-1000, has been designed with the potential for incorporating EMRGs. Built with an integrated power system, the ship will be capable of rapid reconfigurations of power allocation. The ship will feature two permanent magnetic motors which, combined, will be capable of generating nearly 75 megawatts; but it is the ability to create a pulse of millions of amperes of current that will be most challenging. To do this quickly and repeatedly stretch today’s capacitors. So much energy is troublesome in its own right, once it is released. The forces at work to propel a projectile nearly instantaneously to Mach 7 (the projectile experiences a force of 45,000 Gs) require exceptionally strong structures to contain and direct them. As the electromagnetic current is propelling the projectile forward, the two rails of the EMRG through which that current travels are pushing each other apart with equal ferocity. The containment of the electromagnetic and thermal forces involved will only be more complicated on board a metal ship at sea.

There are a number of other challenges US engineers will need to overcome. The gouging from physical contact at hypersonic velocities, the associated cracking, deformation and damage to the materials and structure, the melting and erosion from the exceptional heat created and the searing and corrosion from the electrical current. Research and development continues in the design of the bore, rails, armature and projectile, but further materials research will be also be necessary.[3] The cannon apparatus has been developed but the finished and deployable product will need to be far more robust – it will need to endure not just a single shot, but the sustained firing of rounds (at a rate of 12 or more per minute), which will require an advanced cooling system. These challenges are huge as the thermal and electromagnetic forces involved are massive, and in some cases materials to endure (much less contain) do not really exist yet.

China’s military assertiveness and claims to its region have been one of the main driving factors of this weapon system. In any conflict the US will struggle to project power into the regions waters due to the distance. Whilst the US has focused on developing faster missiles, cruise missiles and artillery, these still take considerable time to reach their intended targets.[4] Rail guns on the other hand could be a potential alternative. Rail gun ammunition, in the form of small tungsten missiles, would be relatively light, easy to transport and easy to handle. And because of their high velocities, rail gun missiles would be less susceptible to bullet drop and wind shift than current shells and missiles. The distance between the US and china is 7200 miles, a railgun object fired from the US mainland would reach a target in China in under an hour.

The development of weapons systems has a force multiplier effect, which allows relatively small armies to defeat much larger armies. The canon, fighter jets, missiles etc all balanced the battlefield out when two lopsided forces went to war. The EMRG, if successful, would be a fundamental, historic leap forward in gunfire technology.  Whilst conventional methods of gunfire are not necessary coming to an end, the development of deployable EMRGs will herald the beginning of a new paradigm in warfare. The technology could also revolutionize other areas of warfare such as Space Launch and Intercontinental Ballistic Missiles (ICBM) which are currently restricted by speed.