In this two part series RO looks at the pillars of both the regime and the rebel opposition forces By Adnan Khan The uprising in Syria has been in a stalemate for over a year and the recent surrender of Homs raises the prospect of a break in this stalemate. The battle for real change in Syria reached its third anniversary in March 2014 and continues to engulf the world’s powers. Whilst the Arab Spring...
22nd May 20146 min 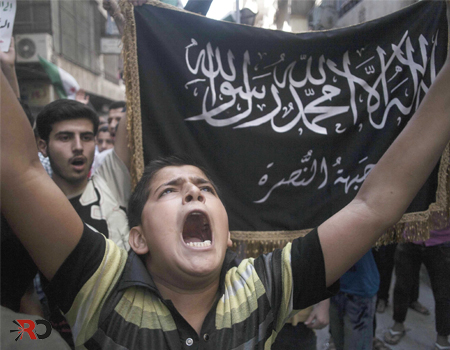 The uprising in Syria has been in a stalemate for over a year and the recent surrender of Homs raises the prospect of a break in this stalemate. The battle for real change in Syria reached its third anniversary in March 2014 and continues to engulf the world’s powers. Whilst the Arab Spring has more or less ended in the other countries in the region that witnessed uprisings, the struggle in Syria has outlived all predictions as the regime and its security-military apparatus have not collapsed and the pillars of support for the rebel groups and opposition have remained intact. Until one or more of the pillars of support for the rebel groups is weakened or removed, the stalemate will continue, making the regime incapable of securing a decisive victory. There are four key pillars of support for the rebel groups, any change in these would shift the balance of power in the country.

Firstly, the unity and coordination between the multiple rebel groups forced the al-Assad regime to fight across the length and breadth of the country. Through asymmetric tactics the rebel groups have been very successful in facing-off against the regime and today control most of Syria’s north. This cohesion is however being challenged by internal differences and will have severe repercussions if these differences were to widen. The Islamic State of Iraq and Sham (ISIS) have severely affected this cohesion with their priority of gaining territory rather than fighting the regime. As ISIS began launch­ing an increas­ing num­ber of attacks against any rebel ­group the group became a tar­get for the other rebel groups. It was this infight­ing that led to the regime solid­i­fy­ing its gains in Homs. There have also been reports of rebel groups giving up their weapons and deserting the cause. In one example rebels rejoined the regime.[1] On May 7 2014 the military court of the Free Syrian Army General Staff sentenced Brig. Gen. Mohammed Abu Zaid to death in absentia for abandoning the rebel ranks and returning to the regime. On April 24 Abu Zaid announced on Syrian state television that he was rejoining the regime. News of his defection came the same week that the head of the military council in Homs and Damascus deserted. This highlights the fractured nature of the rebel groups.

Secondly, the rebel groups have received significant domestic support which made the job of the regime even more complicated. Throughout the conflict domestic support has been shown though large rallies and demonstrations in support of the rebel cause. This has helped rebel groups to resupply their forces, it has also helped them in maintaining supply lines and gaining intelligence on regime troop movements. This support was constantly challenged as the regime indiscriminately bombed towns and cities. Various sieges took place with the regime only stopping if locals turned on rebel groups within their midst. With the regime constantly cutting electricity, gas and routes into rebel held towns the rebel groups took on governance duties, with mixed results. The Free Syrian Army earned a negative reputation in a number of areas. The FSA took charge of two grain silos in Aleppo in late 2012, but corruption and disorganization ensued. Residents complained that many bakeries had to shut down because the group struggled to organize flour delivery and sales, which led to public demonstrations. With the ISIS competing for key terrains in northern and eastern Syria clashes had broken out with residents looking on in horror as rebel groups locked into battle. Any loss of domestic support for the rebel groups would turn Syria into another Iraq, where the people turned against the rebel groups.

Thirdly, the Islamic nature of the uprising has been a key motivator for rebel groups and the domestic population, despite bearing almost apocalyptic conditions. This motivation made most of the rebel groups and the opposition steadfast and ensured that they did not compromise with the regime. Syria’s foreign minister, Walid Al-Moallem in a press conference in June 2013 confirmed what was at stake in the country and the region, he said: “We know that those who plan evil for Syria and those who demand the establishment of the Islamic Khilafah state will not stop at the borders of Syria. So what we are currently doing is even defending Jordan, Lebanon and Turkey.” The Islamic Front (IF) released a statement 17 May 2014 casting doubt on their Islamic agenda. The statement outlined a nationalistic and secular approach.[2] Many rebel groups do not have Islamic aims and are secular in nature and their behaviour has caused concern amongst many civilians. The rebel groups will lose significant support if domestic opinion begins to see the dilution of Islam in the uprising.

Fourthly, the rebels have received significant financial and military support from the Muslim rulers in the region, the West and other benefactors. Each of these benefactors supports a different rebel group: Jordan provides weapons and funding to the southern front, the US and Turkey have been supporting the FSA and the National Coalition, whilst Qatar has been supporting pro-Muslim Brotherhood brigades.[3] Saudi Arabia has also supported Salafi groups such as Liwa al-Islam with money and arms.[4] Whilst each of these countries has its own aims they are all united in creating a relationship of dependency with the rebel movements as a whole. As the al-Assad regime possesses heavy weapons and military platforms the rebel will always need to acquire sophisticated weapons to maintain the uprising. When this support shifts the rebels will find their supply lines dry up which will impact their ability to continue challenging the regime.

The stalemate in Syria will only last as long as the key pillars of support of the rebel groups and regime remain in place. If any of these change or are weakened this stalemate will easily be broken. The rebels have stayed in the fight mostly due to foreign support and weapons, yet feed from the ideological motivation and support from the people of Syria who are suffering a great deal for this. Rebel cohesion is currently at serious risk as many turn on each other rather than the regime, while desertion, whilst small is beginning to grow. The Islamic call within the uprising is now clearly one call amongst many in Syria and if this is relegated below the other secular and nationalist calls this may well lead to the loss of support from the domestic population, who may consider negotiations with the al-Assad regime more suitable.

In part two the pillars of the regime will be analysed

The Electromagnetic Railgun and Implications for War