By Adnan Khan The ceasefire in Homs which has led to the withdrawal of rebel forces, bringing Syria’s largest city after Damascus and Aleppo back into regime hands was described by Iran as a victory for the al-Assad regime. Iran’s Alaeddin Borujerdi, an influential government insider said: “We have won in Syria, the regime will stay. The Americans have lost it.”[1] Homs had become the heartland of Syria’s uprising and witnessed some of the fiercest...
15th May 20145 min 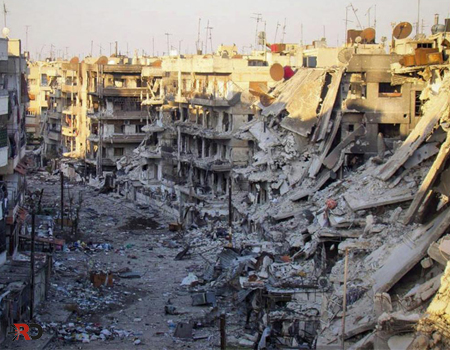 The ceasefire in Homs which has led to the withdrawal of rebel forces, bringing Syria’s largest city after Damascus and Aleppo back into regime hands was described by Iran as a victory for the al-Assad regime. Iran’s Alaeddin Borujerdi, an influential government insider said: “We have won in Syria, the regime will stay. The Americans have lost it.”[1] Homs had become the heartland of Syria’s uprising and witnessed some of the fiercest fighting in the past three years. Its proximity to the Lebanese border drew fighters from Hezbollah and rebel fighters from the region determined to keep it from falling. The withdrawal has secured the corridor from Damascus to Latakia, which has been critical for the regime and now becomes another long list of losses for the rebel groups. The loss of the central city was due to four fundamental reasons.

Firstly, Homs has been effectively under siege for three years. The southwest Sunni Muslim majority neighborhood Baba Amr remained a thorn in the regime’s attempt to end the uprising. Homs has experienced over three army offensives which included bombardment for months at a time. Warplanes, tanks and artillery fired missiles as well as mortars were used indiscriminately to break the resolve of the opposition. Unable to completely placate the rebel fighters the regime even resorted to chemical weapons. The Assad regime used Sarin gas against innocent civilians in the Bayada district, where many people died and scores more were wounded. Maj-Gen Abdul-Aziz Jassem al-Shallal, the former chief of the Syrian military police, who defected to the opposition on the 26 December 2012 confirmed the use of chemical weapons in Homs.[2]

Secondly, whilst the Syrian regime has continued in its indiscriminate slaughter it also began targeting civilians in what one Syrian security official called the “Starvation Until Submission Campaign,” blocking food and medicine from entering and people from leaving besieged areas of Syria.[3] Whilst sieging towns has been a common tactic, blockades around critical areas targeting residents is the most recent tactic employed by the regime. The strategy works by collective punishment of residents in areas where rebels have taken on the regime. In Homs this has been taking place for all of the last 6 months. The UN’s independent Commission of Inquiry confirmed in March 2014 that Syrians were being “denied humanitarian aid, food and such basic necessities as medical care, and must choose between surrender and starvation.” The report confirmed “People have nothing to eat, having exhausted all their supplies and resorted to eating plant leaves.”[4] This is why rebel leaders speaking from Homs said they had little choice but to yield after at least six relentless months of shelling that has taken them and the small number of families who remain in the Old City to the point of starvation.

Thirdly, as the regime failed to conduct sustained attacks into Northern rebel held areas, the regime effectively gave up reclaiming most of the north of the country and focused on cutting rebel supply lines between Damascus and Latakia. This began with the Qalamoun offensive which saw the large scale entry of Hezbollah fighters and then the use of chemical weapons in the suburbs of Damascus. Homs which sits in the middle of this corridor was thus an essential piece of real estate, which would alter the balance of power in the country. For the past year the regime has given up on offensive operations into northern territories and focused on a more defensive posture in securing areas close to the nation’s heartland, this has now paid of for the regime as it stopped conducting offensive operations which has cost it dearly.

Fourthly, the Islamic State of Iraq and Sham (ISIS) played a central role in the surrender of Homs and the defeat of the rebels. As the uprising stands today more resources are being dedicated to fighting the ISIS then the regime which severely hindered rebel supply lines and resources to Homs. The rebel discord has fundamentally been due to the actions of the ISIS. As ISIS began launching an increasing number of attacks against any reebelgroup from late 2013, the group became a target for the other rebel groups. It was this infighting, that led to the the regime solidifying its gains by cutting rebel supply lines and making advances in Aleppo, Deir el-Zour and Latakia and eventually Homs. If this infighting continues to spread across the country, it would severely hamper the rebels in their attempt to topple the al-Assad regime.

Whilst the Homs surrender is being presented by the regime as the beginning of the end of the uprising the al-Assad regime does not control all the countries strategic areas and has struggled to hold all of them at the same time. The rebel hold on homs tied up regime forces trying to lay offensives in the north of the country and represents one of the first strategic victories of  the regime for some time. Rebel groups are still entrenched in areas around key cities and towns undermining the regimes control completely of the country. What has remained a constant in the conflict is the constant flow of territorial gains and losses and it remains to be seen if the regime can replicate its capture of Homs to other parts of the country.

Rise of the New Pharaoh

The Electromagnetic Railgun and Implications for War