By Adnan Khan  In an interview with Egyptian TV Egyptian presidential candidate Abdel Fattah al Sisi, who ousted the country’s previous ruler, made clear the Muslim Brotherhood (MB) was “finished.” Speaking in the first television interview of his electoral campaign, he said, “I want to tell you that it is not me that finished (the Brotherhood). You, the Egyptians, are the ones who finished it.”[1] The country has been in turmoil for much of the...
8th May 20146 min 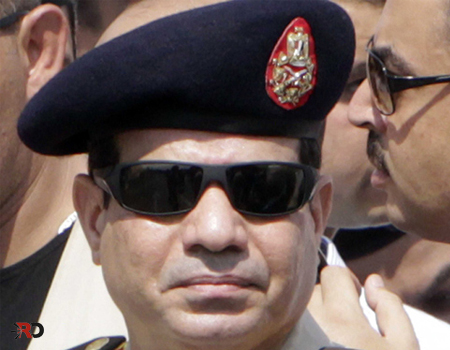 In an interview with Egyptian TV Egyptian presidential candidate Abdel Fattah al Sisi, who ousted the country’s previous ruler, made clear the Muslim Brotherhood (MB) was “finished.” Speaking in the first television interview of his electoral campaign, he said, “I want to tell you that it is not me that finished (the Brotherhood). You, the Egyptians, are the ones who finished it.”[1] The country has been in turmoil for much of the past three years. Mass protests got rid of autocrat Hosni Mubarak in 2011 and elections followed a year later. Morsi assumed office as Egypt’s first freely elected and civilian president. But he was in office for little more than a year when he too was removed. Since then the military lead by Sisi has been preparing the ground for the return of the military and the continuation of the dominance of this institute in Egyptian politics.

The Egyptian army never accepted being removed from power. They were even more incensed when the Muslim Brotherhood (MB), whom they had kept from power for decades, stormed to electoral success. What made the military accept this was the support and endorsement of Morsi by the US. After Morsi’s presidential victory over Ahmed Shafiq, the US made various statements in support of Morsi. US officials gave Morsi even more support when he gave assurances that he would abide by the treaties and conventions concluded by the former regime, primarily the Camp David treaty, which is why the US continues to give Egypt $1.3 billion annually.[2] US diplomat Victoria Nuland said at the time; “President Morsi entered into discussions with the judiciary, with other stakeholders in Egypt. As I said, I think we don’t yet know what the outcome of those is going to be, but that’s a far cry from an autocrat just saying my way or the highway.”[3] However at every junc­ture the Egypt­ian mil­i­tary ensured that its inter­ests were never harmed and did every­thing to main­tain the sta­tus quo. The mil­i­tary formed a coali­tion of con­ve­nience with the MB for much of 2011 and 2012 to man­age the post-Mubarak land­scape and hold rev­o­lu­tion­ary aspi­ra­tions and unfet­tered pop­u­lar mobi­liza­tions in check. It suc­cess­fully co-opted the move­ment against Morsi and, along with the secu­rity estab­lish­ment, emerged as the clear­est win­ner from his over­throw.

The Egyptian military under Sisi worked to completely destroy the MB and every possible threat to their power. Soldiers and police opened fire on hundreds of Morsi supporters that regularly gathered in Cairo in numerous protests, hundreds of people were killed in one example, which Human Rights Watch described as “the most serious incident of mass unlawful killings in modern Egyptian history.”[4] Throughout August 2013 MB members camped out for days in front of the Rabaa mosque in Cairo, protesting the military’s ouster of Morsi. Security forces driving armored vehicles and bulldozers, killed at least 600 people and wounded thousands more.[5] Following this Sisi returned Egypt to martial law. A Kangaroo court was set up where Morsi and other MB members stood trial for “committing acts of violence and inciting killing and thuggery.[6] In December 2013, Egypt’s military-backed government designated the MB a terrorist organization, criminalizing its activities and finances and in April 2014 a judge sentenced 683 MB men to death in a mass trial.[7]

What legitimized Sisi’s actions was the support he has received from the US. The US turned its back on Morsi when it became clear he was unable to secure US interests due to the internal instability, anarchy and indecisiveness Morsi brought. When Morsi was overthrown on 3 July 2013 Obama said: “The Egyptian armed forces should move quickly and responsibly to restore full power to a civilian government as soon as possible.”[8] Secretary of State John Kerry confirmed the return of the military regime as: “restoring democracy.”[9] The situation in Egypt returned to the eve of Mubarak’s overthrow, the army was back in power, Mubarak era cronies were also back in key positions and the opposition who posed any challenge to military rule was incarcerated. The US remained silent on this, thus endorsing it.

In January 2014 the military was able to pass its constitution in a national referendum that the military regime saw as a means of not only normalizing the post-coup political process but also creating a system that solidified the interests of the armed forces. The Sisi regime sought to create a national charter that is palatable to large swathes of the populace, especially given the challenges the armed forces have faced since the dawn of the multi-party politics era nearly three years ago. Al-Nour party, a self-declared Salafist Islamic party, mobilised its supporters to approve the referendum, while the MB called for a boycott of the vote. Al-Nour is now completely behind Sisi, proving that its Islamic rhetoric is just that.[10]

To give himself some semblance of credibility Sisi played on the charade of resigning from the army in order to run for the presidency. The only other candidate in the presidential race, Hamdeen Sabahi, is just a token attempt.[11] Sisi has continued to play on the failure of the MB during their time in power by continually repeating the allegations accusing the MB of links to violent militant groups. His intelligence services continually reveal plots to assassinate him to build legitimacy.

Egypt has a long history of depot rulers who take pride in subduing the populace only to discover later to their horror how the people return to undermine their rule. Only time will tell if Sisi will be another victim or if he will learn from the plight of his predecessors.