By Adnan Khan The US, Russia, Ukraine and the European Union gave vague messages after their meeting in Geneva which aimed to de-escalate the crisis in Ukraine.[1] Whilst the real details will ebb through over the coming weeks, both the EU and US were caught off – guard when Russia annexed Crimea. This annexation made it all the more apparent that Russia could take over East Ukraine and West Ukraine if needed: which raises many...
23rd April 20145 min 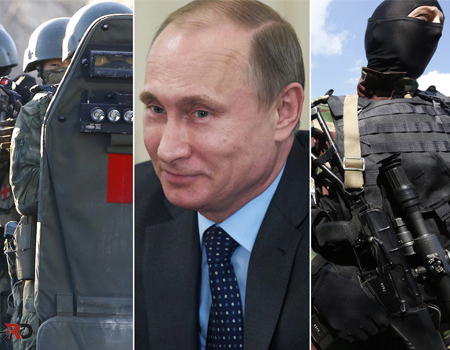 The US, Russia, Ukraine and the European Union gave vague messages after their meeting in Geneva which aimed to de-escalate the crisis in Ukraine.[1] Whilst the real details will ebb through over the coming weeks, both the EU and US were caught off – guard when Russia annexed Crimea. This annexation made it all the more apparent that Russia could take over East Ukraine and West Ukraine if needed: which raises many implications for the security of Moldova, Georgia, Central Asian nations and even of Central European nations that are members of NATO. The US, EU and the temporary government in Kiev have been forced to constantly play catch-up, eventually deciding to negotiate with Russia. Russia was able to achieve this due to four fundamental reasons.

Firstly, the Kremlin has used its military deployments to bolster its diplomatic strategy. Russia laid down the groundwork for the eventual annexation of Crimea. Russia used a so-called snap military exercise to distract attention and hide their preparations for an invasion.[2] Then specially trained troops, without identification patches, moved quickly to secure key installations on the Crimean peninsula. Once these were secured, Russian forces cut telephone lines, jammed communications and used cyberwarfare to cut off the Ukrainian military forces on the peninsula. This completely disconnected Ukrainian forces in Crimea from their command and control. The skillfulness and agility of how the Russians have operated in Ukraine is a far cry from the bludgeoning artillery, airstrikes and surface-to-surface missiles used to retake Grozny, the Chechen capital, from Chechen separatists in 2000.

Secondly, once this was achieved the Kremlin employed an unrelenting media campaign to reinforce its narrative that a Russian-abetted intervention had been needed to rescue the Russian-speaking population from right-wing extremists who had taken over the government in Kiev. When US officials demanded Russia pull back from Crimea, the Kremlin raised the stakes by massing around 40,000 troops near Ukraine’s eastern border. Soon, the Russians were sending small, well-equipped teams across the Ukrainian border to seize government buildings that could be turned over to sympathizers and local militias. Police stations and Interior Ministry buildings, which stored arms that could be turned over to local supporters, were then targeted. “Because they have some local support they can keep leveraging a very small cadre of very good fighters and move forward,” said Daniel Goure, an expert on the Russian military at the Lexington Institute, a policy research group.[3] James G. Stavridis, a retired admiral and former NATO commander said: “It is a significant shift in how Russian ground forces approach a problem. They have played their hand of cards with finesse.”[4]

Thirdly, Russia still retains the option of mounting a large-scale invasion of Eastern Ukraine, but the impact of the air and ground forces massed near Ukraine has deterred the Ukrainian military from cracking down in the East and halted the US from providing military support to Kiev. Military deployments have given the Kremlin the ability to dominate any negotiation and the talk of federalism in Eastern Ukraine from the Geneva conference has shown the success of such a strategy, as the eastern provinces would be largely autonomous and under Moscow’s influence. Ever since the ‘lost decade’ after the collapse of the Soviet Union, Russia has sought to develop more effective ways of projecting power in the former Soviet republics, where many ethnic Russians reside. Since Vladimir Putin emerged as premier, Russia has upgraded its military, giving priority to its special forces, airborne and naval infantry rapid reaction capabilities. These were effectively road tested in Crimea.

Fourthly, as a result of being caught off guard as Russia flexed its muscles, the US has been unable to impose its terms on the Ukraine crisis. Crimea barely figured in the talks in Geneva that involved Secretary of State John Kerry and his counterparts from Russia, Ukraine and the European Union. The US maintained its position on the Kremlin to relinquishing control over government buildings in eastern Ukraine that US officials insist have been held by small teams of Russian troops. Despite this focus, the joint statement the diplomats issued in Geneva did not even mention the presence of Russia’s 40,000 troops near Ukraine’s Eastern border. The US and the EU failed to instigate public opinion on Russia and then impose a solution upon Russia. This is fundamentally due to the fact that both the US and the EU have been again and again caught off guard by Russia’s maneuvering.

Russia’s strength in the Ukraine crisis was in its covert action combined with sound intelligence concerning the weakness of the Kiev government and their will to respond militarily. Despite Victor Yanukovich being overthrown, Russia has been able to maneuver into a position where any future government in Kiev will be unable to operate effectively without Moscow’s support. Russia’s military intervention in Crimea and subsequent buildup of forces throughout the region has raised speculation that Russia could choose to intervene elsewhere in the former Soviet republics such as  Moldova, Georgia or the Baltic states. Russia’s three pronged strategy consisted of the organization of ethnic Russian and pro-Russian social and political groups and movements. The deployment and support of informal security forces in key areas and finally the launching of formal military operations enabled Russia to lay the political groundwork for intervention. This was done while testing both local and foreign responses before the actual intervention took place. This is why the meeting in Geneva occurred, with Russia holding all the aces.