By Adnan khan America’s Pivot to Asia entered the international lexicon in 2011 when the then Secretary of state Hillary Clinton announced: “Our enduring interests in the region [Asia Pacific] demands our enduring presence in this region … The United States is a Pacific power and we are here to stay … As we end today’s wars [the defeats and retreats from Iraq and Afghanistan]… I have directed my national security team to make our...
25th April 20145 min 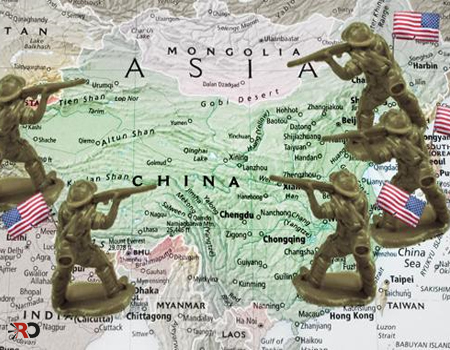 America’s Pivot to Asia entered the international lexicon in 2011 when the then Secretary of state Hillary Clinton announced: “Our enduring interests in the region [Asia Pacific] demands our enduring presence in this region … The United States is a Pacific power and we are here to stay … As we end today’s wars [the defeats and retreats from Iraq and Afghanistan]… I have directed my national security team to make our presence and missions in the Asia Pacific a top priority.”[1] Then in 2012, US Secretary of Defence, Leon Panetta, announced at a security conference in Singapore that the US will shift 60% of its warships to the region over the coming years until 2020. He explained that the “transfer of the US fleet comes in the context of the implementation of a new US strategy designed to raise the level of US military presence in the Asia-Pacific.”[2] As US president Barack Obama visits Japan, South Korea, the Philippines and Malaysia to breathe life into America’s Asia Pivot strategy, it is clear there has been very  little progress so far.

With the drawdown in Iraq and Afghanistan in full swing, the Pivot has been about seeking closer ties – both militarily and economically – with countries dotting the Pacific Rim. In 2012 the US worked to shape multilateral regional institutions in the Asia-Pacific region. This was to unify some countries against China and to prevent a powerful regional coalition from taking shape that did not involve the US. The institutions with which Washington engaged included the Association of Southeast Asian Nations (ASEAN) — described by US Secretary of State Hillary Clinton as the ‘fulcrum for the region’s emerging architecture’ and several ASEAN-led economic and strategic institutions, including the East Asia Summit (EAS) and Asia-Pacific Economic Cooperation (APEC). These structures were in the process of being reshaped, allowing the US a greater say in their futures.

In 2013 the US moved aggressively in the region as North Korea began nuclear tests. These nuclear tests were used by the US to escalate tensions in the region. In the face of much sabre rattling by the North Korean leader Kim Jong-un, the US escalated tensions through a number of provocative actions. This included its annual US-South Korea military exercises, which involved the dispatching of a pair of nuclear-capable B-2 stealth bombers on a training mission over the Korean peninsula. US officials described this as a way of underscoring US commitment to its longstanding regional allies, Japan and South Korea. This was a departure for the US who usually calls for calm when North Korea ratchets up aggression and in the past almost always calls for talks which defuse tensions. The US on this occasion responded to each North Korean provocation with a stronger signal of its own. The US provoked North Korea in order to bolster its presence in the region and increase its military footprint, which is what the ‘pivot’ practically means in the Asia-Pacific region. This is why Obama reiterated: “Washington has an obligation (to) defend the homeland (and) reassure South Korea and Japan that America’s defence commitments remain firm.”[3]

After successfully exploiting the escalation, the US was able to justify expanding its military presence in the region and the deployment of the Ballistic Missile Shield (BMD). As always it eventually returned to dialogue with the six party talks which made China responsible for the actions of North Korea. The rest of 2013 consisted of the US re-calibrating a number of regional alliances, revising defence cooperation agreements and settling some outstanding issues on the presence of US military personnel. A number of visits to the region in October 2013 were cancelled due to the US government shutdown. Diplomatic efforts for Asia repeatedly fell victim to domestic issues. Trips to Malaysia and the Philippines also fell victim to the US shutdown. Presidential visits are important for achieving strategic objectives, as opposed to technical arrangements handled by lower-level negotiators.

The US was able to develop the outline of a new strategy, with South Korea termed  as ‘tailored deterrence’ after provocations with North Korea. The concept focused on coordinating US and South Korean responses to specific threats in specific scenarios, particularly in the form of counter-missile strategy. Washington and Seoul affirmed that they would try to transfer wartime operational control to South Korean forces in 2015. With Japan, the US agreed to a range of new deployments of military hardware, including a new X-band radar, three Global Hawk unmanned aerial vehicles for surveillance and 42 F-35 fighter jets. The sides also resolved some technicalities on the long-debated plan to transfer 9,000 US Marines from Okinawa Island to Guam, the Northern Marianas, Hawaii and rotations in Australia, whilst also proceeding with the Futenma base relocation and other measures to ease the burden on Okinawa which has become a political problem for Tokyo.

America’s Asia Pivot strategy since its announcement has been slow, as the US lacked the capacity to aggressively move forward. The US views China as its major threat, as China has its sights on dominating the Asia-Pacific region. America’s pivot will nevertheless continue to evolve both economically and militarily because the US is drawing down in the Middle East, which will give it the necessary resources to focus on the Far East. For the moment though, the pivot to the Asia-Pacific remains work in progress.

REPORT: A History of US-Iran Relations