The fol­low­ing is the final part of RO’s series look­ing at the key devel­op­ments in Syria as the upris­ing reached 3 years. By Adnan Khan In the struggle for Syria much has taken place in just three years. In part one, we outlined how the rebels had struggled to shift the balance of power as the uprising had reached a stalemate. In part two we assessed why the regime despite possessing more firepower had struggled...
9th April 20146 min 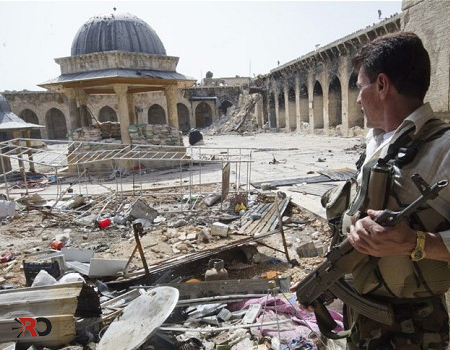 The fol­low­ing is the final part of RO’s series look­ing at the key devel­op­ments in Syria as the upris­ing reached 3 years.

In the struggle for Syria much has taken place in just three years. In part one, we outlined how the rebels had struggled to shift the balance of power as the uprising had reached a stalemate. In part two we assessed why the regime despite possessing more firepower had struggled to defeat the rebels. In part three we assessed the role of the west and how their strategy had evolved based on the changing ground realities. In part four the role of the Muslim rulers was analysed. Part five assessed the role of the ISIS and their role in the conflict. In this final part in the series we assess the emerging trends which will in all likelihood will effect Syria, the region and the world.

The only country that benefits the longer the Syrian crisis continues is the US. This is due to the US constantly failing in finding a loyal alternative to Basher al-Assad. The US from the very beginning has delayed all its solutions as it did not have a trusted alternative to al-Assad. The real reason for not intervening directly in the country is the fact that the US has failed to cultivate a loyal alternative. This is why the US and its allies have given al-Assad all the necessary cover to put down the uprising. The invasion of Libya was justified on the blood bath that was going to take place in Benghazi, Obama said: “Some nations may be able to turn a blind eye to atrocities in other countries. The United States of America is different and as President, I refused to wait for the images of slaughter and mass graves before taking action.”[1] In Syria after multiple massacres the US, as well as the wider West has still refused to intervene.

Ever since the uprising started in Syria only a minority of those fighting on the ground in Syria have taken part in negotiations with the regime, which have been organised by the West. The West and its media have presented negotiations with the regime as the only solution to the crisis. Military intervention has been ruled out and any intervention by the Muslim countries lacks political will (not capability) and thus ensures the continuation of the status quo. All efforts from the West are for ‘moderate’ elements from the opposition to negotiate with elements of the regime which in effect keeps the facts on the ground the same after many have given their lives for real change. As the stalemate in Syria continues it is likely more and more rebel groups will consider negotiations as an option, however for the moment the west has failed in cultivating such a faction and success and failure in this area will determine if the West s able to derail the demand for real change in the country.

As the rebels continue in the struggle to topple al-Assad no blueprint or vision for the post al-Assad landscape has been presented. This is understandable from many aspects as the crackdown from the regime is brutal and leaves little discussion of what will happen afterwards. This strategy has however been a recipe for disaster in other countries such as Afghanistan and Egypt recently and has fuelled civil war amongst factions who may have worked together to overthrow a regime. Hizb ut-tahrir the global Islamic political party has presented an Islamic constitution to numerous brigades in Syria calling for them to unify amongst each other on the basis of Islam and work towards establishing the Khilafah as a post-Assad system.[2] Hizb it-Tahrir has been able to get a number of brigades to sign up to such agreements and its work continues to unify the various brigades and factions around establishing the Khilafah with a constitution based upon Islam.[3] Unifying as many groups upon the same post al-Assad blueprint will ensure infighting does not ensue.

The Syrian uprising and subsequent bloodshed is leading to a revival amongst the Muslims who reside in the West. In Europe in the early 1990’s the slaughter of Muslims in the Balkan wars led to a revival amongst the Ummah, many women began wearing the Hijab and many began collecting money for Jihad and began political work to establish Islam. A similar trend is taking place in Europe currently and specifically amongst the young Muslims. The NYT highlighted: “A rising number of radicalized young Muslims with Western passports are traveling to Syria to fight with the rebels against the government of Bashar al-Assad, raising fears among American and European intelligence officials of a new terrorist threat when the fighters return home.”[4] Syria is a now considered a forbidden cause by western governments, on 3rd February 2014 the head of counter-terrorism at the Crown Prosecution Service in the UK warned Britons could face jail if they travel to Syria to take part in the conflict or attending rebel training camps. The British  Home secretary even took the unprecedented action of making a number of individuals stateless by revoking their British passports and citizenship.[5] With the Islamic call from Syria only growing, the west is extremely worried of the ramifications this will have on its indigenous Muslim citizens.

Whether it’s the west or the al-Assad regime the emerging trends do not bode well for them. The Ummah of Syria have remained steadfast, despite brutal tactics of suppression by the regime and with the west looking the other way, they continue in their struggle for real change. The longer the struggle continues in Syria the more this is agitating the global Ummah and the more the moderate groups become at odds with the Ummah who view any negotiation with the west or the regime as treachery. The biggest challenge for the west and al-Assad is they have to put down each and every attempt by the Ummah to bring real change to the country. The Ummah of Syria just needs to succeed once