In Part 5 of this 6 part RO series look­ing at the his­tory of Iran-US rela­tions, Iran’s role in the afghan occupation and its nuclear programme analysed By Idrees Devries The American military operation “Enduring Freedom” removed the Taliban from all positions of power in Afghanistan. Thereafter, through its agent Hamid Karzai – who during the Soviet occupation of Afghanistan had worked for the CIA [1] – America installed a new political structure that could be...
7th April 20145 min 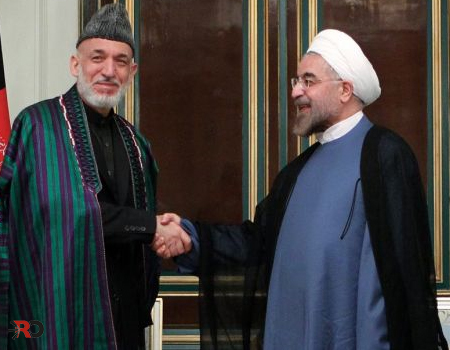 In Part 5 of this 6 part RO series look­ing at the his­tory of Iran-US rela­tions, Iran’s role in the afghan occupation and its nuclear programme analysed

The American military operation “Enduring Freedom” removed the Taliban from all positions of power in Afghanistan. Thereafter, through its agent Hamid Karzai – who during the Soviet occupation of Afghanistan had worked for the CIA [1] – America installed a new political structure that could be controlled from Washington and would be loyal to American interests.

One of the first Americans political manoeuvres with regard to Afghanistan was the organization of the Bonn Conference during December 2001. Through this conference America wanted to gather support amongst the various local Afghan factions and international players for the Afghan transitional government established by America. According to James Dobbins, the chief American negotiator during this conference, Iran realized for America “the final breakthrough without which the Karzai government might never have been formed”. Thereafter Iran supported the stabilization of Afghanistan through economic aid. From 2002 until 2007 it spent around $560 million to establish schools, roads, water purification stations and other infrastructure projects. It has remained an important player on the international scene, participating in all major international conferences on Afghanistan organized by America, such as the London Conference of 2006, the Hague Conference of 2009 and the Bonn Conference of 2011. More recently Iran also supported the American plan to have Karzai negotiate with the Taliban. [2]

The Iranian ambassador to Afghanistan Muhammad Reza Bahrami explained his countries actions: “Our strategy in Afghanistan is based on security, stability and developing a strong central government”. [3] In other words, just as was the case for Iraq, the Iranian policy vis-à-vis Afghanistan too is in perfect alignment with the American policy, to the extent it serves as an extension of the American policy.

The most recent development in the relationship between Afghanistan and America, the so-called Bilateral Security Agreement (BSA) which will give America a formal right to maintain thousands of soldiers in Afghanistan on bases scattered across the country, has provided further proof that Iran support the America in Afghanistan. The Iranian ambassador to Afghanistan Muhammad Reza Bahrami said regarding the BSA: “it’s the genuine right of Afghanistan to preserve its national interests and sign an agreement with another country, and we won’t interfere with it, because it’s the internal affairs of Afghanistan”. [4] His description of the BSA as “the internal affairs of Afghanistan” is an attempt a manipulating public opinion regarding the treaty. The stationing of thousands of American troops in Afghanistan indefinitely, supported by drones, will have far reaching consequence for all countries in the region, namely, because it will give the American military the ability to project power across the region. This is so obvious that the Iranian ambassador’s denial of this fact can only be explained as an attempt to hide it.

The Zionist occupation state wants to prevent the countries in her surrounding from acquiring nuclear weapons. A Zionist general once explained this pillar of the Zionist policy: “Most Israelis would prefer not to live here; most Jews would prefer not to come here with families, and Israelis who can live abroad will (if a surrounding country would get nuclear weapons)”. [5] Because of this policy the Zionist state has in the past undertaken various military operations in the Muslim world. For example, through Operation Opera on the 7th of June 1981 it attacked Saddam Hussein nuclear facilities in Iraq, and in 2007 it attacked various facilities in Syria.

In 2003 an Iranian dissident living in America presented information about Iran’s nuclear activities that caused upheaval across the globe. In response, Great-Britain, France and Germany (the “EU-3”) began political actions to make Iran halt all of its nuclear activity. In both 2003 and 2004 the EU-3 and Iran came to agreements on the matter, but on the ground these agreements did not lead to the outcomes desired by the EU-3. In 2006 America therefore offered to support EU-3 in its negotiations with Iran. Thereafter the topic of sanctions came to the table. [6]

At the same time America protected Iran against an attack on her nuclear facilities by the Zionist occupation state. [7] Recently the chief-of-staff of the American military, General Martin Dempsey, and the chief-of-staff of the American air force, General Mark Welch, travelled to the Zionist occupation state to ensure the Zionists would not do anything rash such as a military attack on Iran. [8]

Therefore on the one hand America can be seen to threaten Iran over its nuclear ambitions, while on the other it protects it. The meaning of this is that America wants Iran’s nuclear ambitions to exist under its control, such that these ambitions will serve the American plans for the Middle East. The Iranian “nuclear threat” is keeping the Europeans pre-occupied politically, limiting their ability to develop and execute political actions against America elsewhere. And it deeply frightens the countries of the Gulf, which makes them more susceptible to America manipulation and motivates them to spend billions of dollars on American weapons and other military supplies.

Part 1 – A History of US-Iran Relations

Part 2 – Iran: From Mossadeq to the Shah

Syria and the Islamic State of Iraq and Sham (ISIS)