In part 5 of this 6 part series on the third anniversary of the uprising in Syria, RO analysis the ISIL who have gained much media attention ever since their emergence in Syria. By Adnan Khan After 3 years of fighting the al-Assad regime, the rebels have held the regime to a stalemate. Central to this has been the Jihadi groups who fought US forces in Iraq and added this experience to the Syrian uprising....
4th April 20147 min 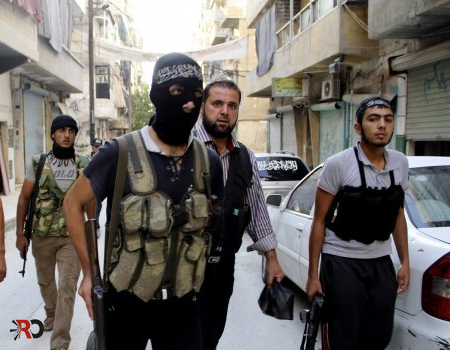 In part 5 of this 6 part series on the third anniversary of the uprising in Syria, RO analysis the ISIL who have gained much media attention ever since their emergence in Syria.

After 3 years of fighting the al-Assad regime, the rebels have held the regime to a stalemate. Central to this has been the Jihadi groups who fought US forces in Iraq and added this experience to the Syrian uprising. As the uprising continued rebel discord has grown in size and scope and now threatens to derail the gains made. The emergence of the Islamic State of Iraq and Sham (ISIS) from Iraq and its spread into the Syrian battlefield has created a fracture within the relatively unified rebel opposition groups and this trend rep­re­sents an omi­nous sign moving forward.

The ISIS originated as an insurgent group during the US invasion of Iraq, and for the past decade it has been Iraq’s pre-eminent group. During that time it has operated under various names, including al-Qaeda in Iraq and the Islamic State of Iraq (ISI). When the Syrian uprising started, those fighting in Iraq were sent to take part in the uprising in Syria and stand-off against the regime. Supported by ISI leader Abu Bakr al-Baghdadi, Abu Muhammad al-Joulani formed Jabhat al-Nusra (Nusra Front) in January 2012. However tensions erupted in April 2013 when al-Baghdadi released an audio message in which he announced his organization had subsumed Jabhat al-Nusra. Al-Baghdadi named the new and expanded organization the Islamic State in Iraq and the Levant and reportedly moved to Syria’s Aleppo governorate to take charge. The announcement sent shockwaves across Syria and the region, but more so, amongst the leadership and rank-and-file within Jabhat al-Nusra. Within days, Abu Muhammad al-Joulani, the head of Jabhat al-Nusra rejected the proposal and ‘reaffirmed’ his allegiance to Ayman Al-Zawahiri, who for Joulani, represented the global Jihad,[1] whereas Baghdadi represented the cause in Iraq. As a result fighters from Iraq moved into the Syrian theatre and began taking over territory Jabhat al-Nusra controlled and was governing.

Since the announce­ment of ISIS, its actions in Syria have only cre­ated more ene­mies and oppo­si­tion against them, includ­ing the indige­nous peo­ple of Syria. The ISIL sparked large protests against themselves when its members opened fire on protesters.[2] Rebel fight­ers have been increas­ingly upset over ISIL per­se­cu­tion in north­ern Syria. One inci­dent includes the abduc­tion, tor­ture, and killing of the Ahrar al-Sham mem­ber Dr. Hus­sein al-Suleiman (aka Abu Rayyan), whose muti­lated body was found on Jan­u­ary 1st 2014.[3] Matters reached boiling point in early January 2014 when Jabhat al-Nusra took over an ISIS position in Atmeh in northern Syria in conjunction with Ahrar al-Sham. Today the ISIS control four border towns – Atmeh, al-Bab, Azaz, and Jarablus, allowing it to control the entrances and exits from Syria into Turkey. Vio­lent con­fronta­tions between Ahrar al-Sham and ISIS have now become a reg­u­lar fea­ture in north­ern Syria.

Whether it’s the ‘Islamic State of Iraq’ or the ‘Islamic State of Iraq and Sham (Lev­ant)’, this group views itself as a polit­i­cal entity who is rul­ing over its ter­ri­to­ries. For ISIL, imple­ment­ing Islam includes their under­stand­ing of the creed and as a result many have been accused of apos­tasy for tak­ing dif­fer­ent posi­tions to them. Based on this, courts have been set up and any oppo­si­tion to ISIS rule or ver­dicts has been viewed as rebel­lion and has seen indi­vid­u­als and groups pun­ished with exe­cu­tion. With ISIS con­trol­ling a num­ber of check­points lead­ing into Turkey, many res­i­dents have com­plained of pay­ing mul­ti­ple tar­iffs to just shop for basic sta­ple foods.  ISIS is com­posed of fight­ers, who should be on the front lines facing-off against the regime, but many remain in rebel held ter­ri­tory run­ning check­points, act­ing as judges and dis­trib­ut­ing resources. Rather than elect peo­ple from amongst the indige­nous pop­u­la­tion, those best expe­ri­enced in fight­ing are gov­ern­ing over the peo­ple and as a result main­tain­ing cohe­sion has been through the gun. The aims of the ISIS and what remains of Jabhat al-Nusra differ in terms of priority; but both have the re-establishment of the Khilafah as their end objective. Implementing Islam in the territories under their control has been the priority of ISIS, whilst Jabhat al-Nusra has focussed on fighting the regime rather than governance like many of the other groups.

Many in Syria consider ISIS to be linked to the regime and possibly working for them. The defecting diplomat Nawaf al-Fares stated in an interview with the Daily Telegraph that Jihadis were used by the Syrian government in attacks against civilians so that the government could blame the deaths on Syrian rebels. Mr Fares’ most damaging allegation was that the Syrian government itself has a hand in the nationwide wave of suicide bombings on government buildings, which have killed hundreds of people and maimed thousands more. He said: “all these major explosions have been perpetrated by al-Qaeda through cooperation with the security forces.”[4] All militant groups of whatever persuasion have had government support, funding and arms at some point. Some may have turned against their masters, but this all points to the fact that governments have links to militant groups, although their influence over these groups may fluctuate. Whilst there is no doubt there are many sincere individuals who have taken up arms against the regime to bring real change to the country, it cannot be ruled out that such groups are infiltrated. Al-Qaeda in Iraq (AQI) which was drowning the US in a quagmire, in the middle of the insurgency turned to targeting civilians. It turned against the Shi’a as well as conducting suicide bombings in public places, massacres and executions. Very quickly the insurgency against the US weakened as the various groups began fighting al-Qaeda rather than US troops. Many consider the insurgency in Syria  to have been infiltrated by Jordanian, Syrian and US intelligence assets at the time.

What makes the discord between the ISIS and the other rebel groups so important is the scale of what is hap­pen­ing. This is the first time the Syr­ian upris­ing is see­ing more resources ded­i­cated to infight­ing than fight­ing the regime. This takes place as the West strug­gles to bring together a ‘cred­i­ble’ ele­ment of the oppo­si­tion in its solu­tion to Syria. The rebels have not launched a major offen­sive against Dam­as­cus for some time.  If the rebel groups con­tinue down this road, the Syr­ian peo­ple may even­tu­ally decide nego­ti­at­ing with the Assad regime is the lesser of two evils.

Syria and the Muslim Rulers