The fol­low­ing is the fourth install­ment of RO’s series look­ing at the key devel­op­ments in Syria as the upris­ing reaches 3 years. By Adnan Khan On the third anniversary of the Syrian uprising, Syria’s rebel groups and the role of the West continue to grab most of the headlines. The role of the Muslim rulers has not received the level of attention as the West but they have played an integral role in maintaining the...
2nd April 20146 min 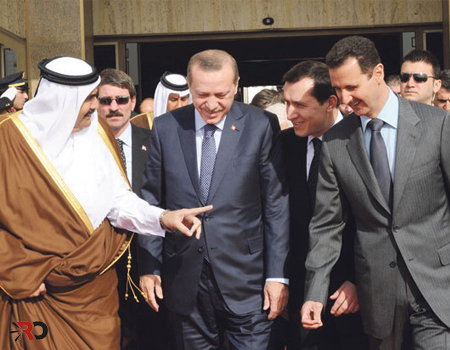 The fol­low­ing is the fourth install­ment of RO’s series look­ing at the key devel­op­ments in Syria as the upris­ing reaches 3 years.

On the third anniversary of the Syrian uprising, Syria’s rebel groups and the role of the West continue to grab most of the headlines. The role of the Muslim rulers has not received the level of attention as the West but they have played an integral role in maintaining the al-Assad regime and executing the West’s strategy. Whether it is Iran, Saudi Arabia, Turkey, Jordan or Qatar, all of these countries have been mere pieces on a chessboard, owned and managed by the West. Despite numerous meetings, conferences and summits the Muslim countries are not presenting any solutions other than executing those developed in London, Paris and Washington.

Turkey has played a central role in housing and building America’s strategy of bringing loyal new faces to negotiate with the Syrian regime. Turkey trained defectors of the Syrian Army in its territory, and in July 2011 a group of them announced the birth of the Free Syrian Army under the supervision of Turkish military intelligence. Turkey has housed the leadership of the FSA and South Turkey has been used to smuggle weapons into Syria. Turkey over the last decade has been playing a role in the wider Muslim world, by not proposing new solutions or strategies but by partaking in implementing US plans. Turkey’s role in the world was clearly outlined by Erdogan at AKP party group meeting: “Today Turkey is interested in most of the subjects in the world that the USA is interested in. We share a common vision in a very broad spectrum from Afghanistan to Iraq, Palestine, and Balkans. But most importantly we are in a concrete cooperation. As Mister Obama stated in his visit we have entered a model partnership phase and we are acting accordingly. There are some things we can make public and there are some things that cannot be shared. Those who want to cloud the Turkish-American relations are ignoring the multidimensional quality and the depth of these relations.”[1]

Qatar has funded the Syrian rebellion with as much as $3 billion[2] as the uprising has evolved. Like Saudi Arabia, Qatar has not presented any new solutions to the Syrian crisis but has participated in cobbling together a loyal opposition. Qatar’s wider role in the Middle East  has been to take part in implementing, hosting, organizing and bringing the various parties in the regions conflict together. All the groups and factions Qatar supports and provides sanctuary to are hostile to the US. Qatar was in fact at the forefront in all the strategies by the EU for Syria. Qatar played the central role in bringing together the ‘friends of Syria,’ group which was Europe’s attempt to establish a future transitional government. This strategy fell apart as most of the constituent members had no influence in Syria and have spent most of their lives outside the country.

Jordan has not deviated from its historical role of supporting Western aims in the region. After a joint military exercise in June 2013, the US left troops, F-16 fighters and Patriot missile batteries deployed in the country. However, Jordan’s main role has been to house the CIA and US Special Forces who have been training Syrian rebels fighting in the south of the country. Jordan has also been one of the main routes through which weapons into Syria travel. Like Qatar, Jordan is central to managing the flow of arms to the right western friendly moderate rebel groups.

Iran has played a direct role in arming, funding and propping up the al-Assad regime. The Iranian regime maintains close ties with the Syrian leadership in order to act as a bloc in the region; these ties included military, economic and political ties. Iran has transferred significant weaponry to prop up the al-Assad regime and provided oil and gas at reduced prices due to the lack of energy reserves in Syria. When the al-Assad regime was on the verge of collapse, Iran intervened and came to the rescue through deploying its Revolutionary Guards (IRGC).

Without the rulers in the Muslims lands the West’s strategy of maintaining the al-Assad regime would not have been possible. The rhetoric from the Muslim rulers is really a façade as their actions have all maintained the al-Assad regime. Rather than lead­ing the way to solve the cri­sis, Turkey, Jor­dan, Qatar and Saudi Ara­bia have merely been con­fer­ence organ­is­ers, mid­dle­men for nego­ti­a­tions and hold­ing grounds for CIA per­son­nel. The mil­i­tary capa­bil­ity exists amongst the sur­round­ing Mus­lim nations to end the cri­sis, what is miss­ing really is the polit­i­cal will, thus the rea­son there has not been any inter­ven­tion is due to the lack of polit­i­cal will. Bashar al-Assad’s forces would stand lit­tle chance from an Egypt­ian or Turk­ish advance.

Syria and the Islamic State of Iraq and Sham (ISIS)