Part 3 of this 6 part RO series look­s at the evolving western strategy in Syria By Adnan Khan When the Syrian uprising began 3 years ago amongst the euphoria of the Arab Spring,  Western nations looked on expecting Basher al-Assad to put an end to matters. America, familiar with the brutal tactics of the regime expected the Arab spring to be quickly quelled in Syria. Hillary Clinton laid out the US position at the...
1st April 20146 min 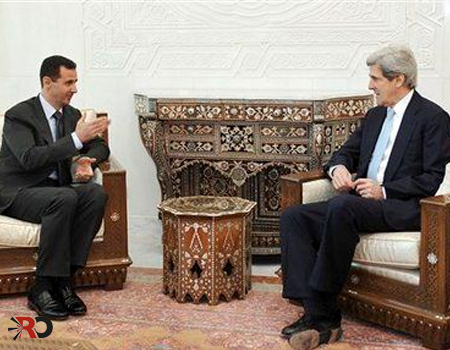 When the Syrian uprising began 3 years ago amongst the euphoria of the Arab Spring,  Western nations looked on expecting Basher al-Assad to put an end to matters. America, familiar with the brutal tactics of the regime expected the Arab spring to be quickly quelled in Syria. Hillary Clinton laid out the US position at the time: “There are deep concerns about what is going on inside Syria, and we are pushing hard for the government of Syria to live up to its own stated commitment to reforms. What I do know is that they have an opportunity still to bring about a reform agenda. Nobody believed Qaddafi would do that. People do believe there is a possible path forward with Syria. So we’re going to continue joining with all of our allies to keep pressing very hard on that.”[1] Very quickly, the defections in Assad’s army began, the people of Syria rose up across the country, their Islamic call shocked the world and al-Assad responded with even more brutal force. The West has been forced to constantly to adjust its strategy towards Syria and four key trends can be observed.

Firstly, despite the brutal massacres carried out by the regime and the use of chemical weapons, the West has constantly given the al-Assad regime cover through initiatives in Geneva and by doing little against the regime itself. Former US ambassador to Syria Ryan Crocker outlined the West’s strategy:  “We need to come to terms with a future that includes Assad – and consider that as bad as he is, there is something worse.”[2] The Islamic nature of the uprising has seen the west preserving the regime, even if al-Assad is forced to step down. Leon Panetta who was Secretary of Defense at the time made this very clear in an interview with the CNN in 2012, he said: “I think it’s important when Assad leaves – and he will leave – to try to preserve stability in that country. And the best way to preserve that kind of stability is to maintain as much of the military, the police, as you can, along with the security forces, and hope that they will transition to a democratic form of government. That’s a key.”[3] Even the giving up of chemical weapons maintained the regime.

Secondly, the core aspect of the West’s strategy has been the establishment of a loyal opposition who will negotiate with the al-Assad regime. By gathering the different factions in Switzerland through Geneva 2 initiative in late January 2014, was in this vein.  However, the West has struggled in cultivating an opposition that has influence on the ground in Syria who will then negotiate with the al-Assad regime in a transitional government, and ultimately, share power with him and his cronies. The Western backed Free Syrian Army (FSA) has been completely out-classed and out-gunned by various Islamic alliances, and the National Coalition (NC) spends more time in Washington, London and Paris then it does in Syria. Its armed wing, the Supreme Military Council (SMC) was humiliated in December 2013 after receiving months of training, diplomatic support and aid from the West, lost control of its headquarters and supply depots in northern Syria to the Islamic Front.

Thirdly, the West has attempted to weaken the Islamic opposition through dividing the rebels on the ground, thought demarcations and labels of moderate and extremist. The West’s strategy in cooperation with the countries in the region has been to weaken who they view as radical factions, who have been extremely successful by diverting their attention against the regime through rebel infighting. With the other groups, a strategy of infiltration appears to be the tactic in order to weaken them. The Geneva conferences also aimed to exploit the gaps in infighting between rebel groups through demarcating between the rebel groups both politically and militarily and through assigning them labels of “moderate” and “radical” to further widen the divisions.  In this way the West can absorb and utilize the moderates in its roadmap and isolate and exclude the radicals. This was a similar strategy to what was pursued in Iraq.

Fourthly, the surrounding Muslim countries have played a central role in maintaining the al-Assad regime, despite their rhetoric of supporting the people of Syria. As many of the rebel groups individually are very small; the West through Saudi Arabia, Turkey, Qatar and Jordan have attempted to weaken the Islamic groups through absorbing them into larger alliances which weakens their capabilities. The FSA is heavily influenced by the Turkish intelligence agencies, whilst Saudi Arabia has played an important role in distributing weapons. Saudi Arabia played a central role in the establishment of Jaish al-Islam, its leader, who was also the leader of Liwa al-Islam – chief Zahran Alloush- has a long and chequered history with Riyadh. Similarly,  Qatar has played an important role in financing and supporting ‘moderate,’ groups in order separate them from the more Islamic groups.  This aspect of the West’s strategy is aimed at infiltrating the rebel groups in order to weaken them in the face of the regime.

With each development in Syria the West has constantly adjusted its strategy. What has remained the same despite such developments has been maintaining the Syrian regime and ensuring that the opposition does not change this status quo. The Geneva conferences all take place with this objective in mind. The West has also used the surrounding Muslim countries just as they did in Iraq and Afghanistan to achieve its objective in guaranteeing real change does not come to Syria. Russian Foreign Minister Sergey Lavrov after the Geneva 2 Conference in an interview confirmed this to Vesti 24: “there are conditions when all the Syrian patriots must understand what is more important: to fight on the side of those who want Syria to become the Khilafah or to unite and return their homeland the image that it was famous for centuries – namely, a multi-confessional, multi-ethnic, secular state in which all the people live comfortably. This issue will definitely be one of the principal at the Geneva Conference.”

America, Iran and the Middle East

Syria and the Muslim Rulers