In Part 4 of this 6 part RO series look­ing at the his­tory of Iran-US rela­tions, the Iran-Iraq war and Americas colonisation of Iraq is  analysed By Idrees Devries Shared interests had brought America and Khomeini together. After the success of the revolution America began work to ensure it would remain in Khomeini’s interest to work with America. For this reason America supported a number of clients from the regime of the Shah who had fled...
28th March 20148 min 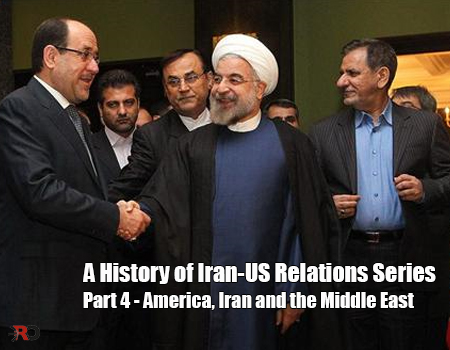 In Part 4 of this 6 part RO series look­ing at the his­tory of Iran-US rela­tions, the Iran-Iraq war and Americas colonisation of Iraq is  analysed

Shared interests had brought America and Khomeini together. After the success of the revolution America began work to ensure it would remain in Khomeini’s interest to work with America. For this reason America supported a number of clients from the regime of the Shah who had fled their country following Khomeini’s revolution. It used these people to exert pressure on the Khomeini regime. Amongst these people was Gholam Ali Oveisi who had set up base in Iraq and worked from there against the new power in Iran. Another was Shapour Bakhtiar, the last prime-minister of the Shah. Both these men regularly flew to Washington to meet representatives from the American government. [1]

When on the 22nd of September 1980 Iraq attacked Iran, America had what it really wanted. It immediately pressured Saudi-Arabia to increase oil production and make the oil price collapse. The combination of war and low oil prices destroyed public finances in both Iraq and Iran. [2]

Initially, the element of surprise seemed to work in support of Iraq as it quickly moved forward. Iran seemed destined for defeat. At that exact moment America began supplying Iran with weapons and desperately needed spare parts for its military equipment. During January of 1981 American supplies worth billions of dollars were sent to Iran through the Zionist occupation state, which enabled Iran to counter the Iraqi offensive. Within a year thereafter it was Iraq that was close to collapse. During spring of 1982 Iran was on the verge of victory when America began sending supplies worth billions of dollars through the Zionist occupation state to Iraq. [3]

In addition to weapons the CIA also supplied both sides in the war with intelligence. During 1986 the CIA met with representatives from the Iranian government for this purpose on various occasions. This further American interference caused mass casualties on both sides of the conflict. For example, America had warned Iran that Iraq was preparing an attack on the massive Majnoon oil field. This enabled the Iranians to prepare and inflict heavy damages on the Iraqi’s. When Iraq learned about this, they realized that the American objective behind their “support” was to make the war between Iraq and Iran last as long as possible. [4]

Richard Murphy, deputy Foreign Secretary from 1983 to 1989, summarized this American policy in the following manner: “(The) administrations basic position in the war between Iran and Iraq was that a ‘victory by either side is neither military achievable nor strategically desirable.” [5] In other words, America was out to weaken both Saddam Hussein and Ayatollah Khomeini, with the ultimate aim of bringing Iraq into the American realm of influence and keeping Iran there.

Lastly, during the Iraq – Iran war America kept the Khomeini regime informed of the movements, plans and actions of Soviet spies in Iran. This American effort to protect Khomeini’s regime is proof that America never intended to destroy it, but only to weaken it. [6]

Shortly after invading Iraq, on the 20th of March 2003, America installed in the country a transitional government. This so-called Iraqi Governing Council (IGC) was organized along ethnic lines with 13 representatives from Iraq’s Shia community, 5 from the Sunni community, 5 Kurds, 1 Turkmen and 1 Assyrian, allegedly to ensure all the Iraqi communities were represented, and was fully controlled by the Coalition Provisional Authority (CPA) lead by the American L. Paul Bremmer.

Iran was the first country in the world that recognized the IGC as an independent government, although it was obvious from the very beginning that it was no more than a dog on an American leash. The Iranian president at that time, Mohammed Khatami, said concerning the IGC on the 17th of November 2003: “We recognize the Iraqi Governing Council and we believe it is capable, with the Iraqi people, of managing the affairs of the country and taking measures leading toward independence.” Analysts from STRATFOR saw in this declaration a proof that “common geopolitical interests have forced both sides to collaborate with one another”. [7]

The first foreign trip of the IGC was also to Iran, on the 19th of November 2003. Jalal Talabani, who lead the IGC delegation, said the Iranians agreed with the opinion that the Iraqi resistance against Americans was not “resistance against occupation but the work of indiscriminate killers”. During the visit the IGC and Iran also signed a number of treaties under which Iran promised to help improve “stability” in Iraq, “support” the rebuilding efforts, and help Iraq sell its oil on the world markets. [8] In other words, Iran committed to supporting the plans to bring Iraq under American control.

And Iran kept its promise. On the 10th of April 2004 president Khatami responded to Moqtada as Sadr’s refusal to obey the Americans in the following manner: “Iran considers any policy that would intensify the crisis in Iraq and jeopardize the establishment of security harmful for Shiites and Islam.” [9]

Then on the 14th of April Iran sent an official delegation to Iraq to support the Americans and British in bringing Iraq under control. This delegation was headed by Hussein Sadeqi from the Iranian ministry of foreign affairs and one of its tasks was to reign in Moqtada as Sadr and his Sadr-army. In an official declaration the Americans said Sadeqi had been invited by the British. They also said, however, that they had agreed to this British initiative, meaning that America had been involved in this plan from the very beginning. The Iranian minister of foreign affairs Kamal Kharrazi said regarding Sadeqi’s mission: “There has been a lot of correspondence with the US about Iraq and the Swiss embassy in Tehran, which represents US diplomatic interests in the Islamic republic, played a mediating role in the recent exchanges”. [10]

John Abizaid, the head of American military in the Gulf region at the time, also confirmed the Iranian support for bringing Moqtada as Sadr under control. Gary Sick, Iran-advisor to president Carter, explained this in the following manner: “There have always been two strains to US policy. Just as Iran often seems to follow policies where the one part of the government seems to differ from what the other part of the government is doing, we see the same thing in the United States very much. We have, from the beginning, in fact, relied on Iran and its assistance, especially in the south and its relations with the Shi’ite, to maintain peace and order and to lend support to a more moderate perspective in Iraqi politics. At the same time, almost without stop, we have been criticizing Iran’s activities in Iraq”. [11]

Following the American – Iranian cooperation to stabilize Iraq, the two countries also cooperated to ensure continued American control over the country. America allowed pro-Iranian political parties to take the positions of leadership in Iraqi politics and these parties, lead by Ibrahim al Jafari and Nouri Al Maliki, have signed various treaties that enable America to continue to control Iraq and use it as a base from which it can project power across the Gulf region. The Status of Force Agreement (SOFA) from 2008 allows America to keep 30,000 to 50,000 soldiers stationed in Iraq permanently as advisors, with full immunity from Iraqi law. Through the Strategic Framework Agreement the two countries agreed that America would continue to protect Iraq from internal and external enemies, would help Iraq to “democratize” further, and would have full freedom to fight “terror” on Iraqi soil. The Strategic Framework Agreement also locked Iraq into the American plans for the Iraqi economy, international trade, science, and culture. [12] An example of the far reaching influence America maintains in Iraq is the security arrangement regarding the Al Basra Oil Terminal (ABOT), from which 85% of Iraqi oil is shipped to markets around the world. The American navy provides security, meaning that America fully controls the flow of oil out of Iraq. [13]

Part 1 – A History of US-Iran Relations

Part 2 – Iran: From Mossadeq to the Shah

[1] “The United States and Iran: Sanctions, Wars and the Policy of Dual Containment”, Sasan Fayazmanesh, 2008

[7] “The Unnoticed Alignment: Iran and the United States in Iraq”, STRATFOR, 19 November 2003, www.stratfor.com/weekly/unnoticed_alignment_iran_and_united_states_iraq

[9] “The Struggle for Iraq: Mediation; Iranians in Iraq in talks on rebel cleric”, The New York Times, 15 April 2004, www.nytimes.com/2004/04/15/world/struggle-for-iraq-mediation-iranians-iraq-help-talks-rebel-cleric.html?pagewanted=all&src=pm