In Part 3 of this 6 part looking at the his­tory of Iran-US rela­tions, the Islamic revolution that took place in 1979 is analysed By Idrees Devries American began to search for a party that could take over power from the Shah. Various diplomats and advisors to the American government were sent to Iran under false pretexts, to analyze the domestic Iranian situation and identify alternatives for the Shah that could be acceptable to America....
24th March 2014393 min 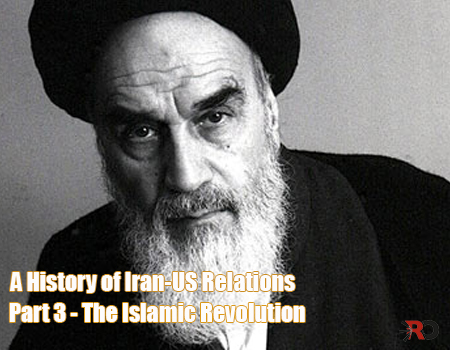 In Part 3 of this 6 part looking at the his­tory of Iran-US rela­tions, the Islamic revolution that took place in 1979 is analysed

American began to search for a party that could take over power from the Shah. Various diplomats and advisors to the American government were sent to Iran under false pretexts, to analyze the domestic Iranian situation and identify alternatives for the Shah that could be acceptable to America. Henry Precht, one of the diplomats involved in Iran at the time, described these missions in the following manner: “To ensure access to Iran’s new political elite and establish a pro-American regime in Iran”. [1] William H. Sullivan, the American ambassador to Iran from 1977 to 1979, said about this period: “But in the spring of 1978 (exactly one year before the Islamic revolution) the situations were changed and we seized the opportunity … our Embassy developed its contact networks within the Iranian dissidents and won their confidence … Most of them were surprised by our opinions and the fact that how much our opinions were close to them … he [the Shah] often asked me, ‘What are your Mullah friends doing?’.” [2]

While in Najaf Khomeini had already been visited by the Americans. Richard Cottam, a member of the CIA that had lead the 1953 coup against Mossadeq, had met and discussed with Khomeini in Najaf on behalf of the American government. Cottam had learned at that time that Khomeini was concerned about a communist take-over in Iran, and that hence he wanted to be careful in his attempt to organize a coup against the Shah so as not to give the communist the chance to make use of the situation. Khomeini asked Cottam to communicate to his masters in Washington that he, Khomeini, would be looking to America for support against a communist coup in Iran. [3]

America also sent representatives to Neauphle le Chateau to continue discussions and negotiations with Khomeini and his entourage there. In October of 1978 Khomeini and America reached an official agreement under which Khomeini promised to cooperate with America, if America helped him to topple the Shah and following the revolution would not interfere in domestic Iranian affairs. The Americans agreed to this. [4]

The American president Carter then sent General Robert Huyser to Iran to ensure support for the  revolution amongst Iranian generals. [22] Huyser arrived in Iran on the 4th of January 1979. His message to the Iranian generals was that if they did not support Khomeini’s revolution, through not interfering, the communists would certainly make use of the situation to make Iran a communist state. On the 18th of March 1979 the Kuwaiti newspaper Al Watan reported: “At the last moment, the United States have explicitly asked the leaders of the army and the generals to take this position, and the American State Department urged its ambassador to convince, as soon as possible, the most prominent generals to not intervene and declare their neutrality in case of political conflicts”. [5]

President Carter, in his memoires, confirmed that Huyser had indeed been sent with this mission: “Huyser was of the opinion that the army had made sufficient plans to protect its equipment and facilities and that it would not come onto the streets. He had dissuaded some of its leaders from the idea of attempting a coup”. [6]

And the Shah understood Huyser’s visit in the exact same manner. In his memoires he said he had been surprised by the arrival in Tehran of Huyser in January of 1979, because Huyser had not informed him of his travel plans. The Shah said that the general “had come to Tehran a number of times, scheduling his visits well in advance to discuss military affairs with me and my generals”. However this time the Shah was not informed. The Shah further said that about Huyser’s mission: “Huyser succeeded in winning over my last chief of staff, General Ghara-Baghi, whose later behavior leads me to believe that he was a traitor. He asked Ghara-Baghi to arrange a meeting for him with Mehdi Bazargan, the human rights lawyer who became Khomeini’s First Prime Minister. The General informed me of Huyser’s request before I left, but I have no idea of what ensued. I do know that Ghara-Baghi used his authority to prevent military action against Khomeini. He alone knows what decisions were made and the price paid. It is perhaps significant that although all my generals were executed, only General Ghara-Baghi was spared. His savior was Behdi Bazargan.” [7]

Then on the 26th of January the American diplomat Ramsey Clark met with Khomeini in Neauphle le Chateau. After the meeting Clark told journalists: “I have a great hope that this revolution will bring social justice to the Iranian people”. [8] In other words, the revolution had been arranged and was ready to be executed.

On the 1st of February Khomeini then boarded a chartered Air France plane that took him from Paris to Tehran. The Shah was outside of Iran at that moment, according to official statement on “on vacation”. It was clear, however, that he knew what was coming and had fled Iran knowing that he was unable to stop it. On the 4th of February Khomeini took formal control of Iran and appointed an interim-government. At the head of this government he placed Mehdi Bazargan.

Bazargan had been one of America’s informants during 1978. On behalf of the American government John Stempel, Henry Precht, Warren Zimmerman en Richard Cottam all had had meetings with the Iranian Freedom Movement which was led by Bazargan.[9] Through this Freedom Movement America remained in close contact with Bazargan during the first months of the revolution. [10]

On the 14th of February Bazargan appointed the other members of his cabinet. The important posts of second prime-minister and foreign minister went to Abbas Amir-Entezam and Karim Sanjabi. Amir-Entezam was appointed second prime-minister. He had lived in America for 20 years and had been in contact with the CIA since the days of Mossadeq. He had actually been a resource for the CIA during the coup against Mossadeq. [11] Sanjabi was appointed foreign minister. He had been in regular contact with the American embassy in Tehran. [12] In total, five people in Bazargan’s cabinet held dual Iranian-American citizenship. [13]

Article 41: “Iranian citizenship is the indisputable right of every Iranian.”

Article 78: “All changes in the boundaries of the country are forbidden” Article 115: “The President must be elected from among religious and political personalities possessing the following qualifications: Iranian origin; Iranian nationality …”

Following the French example Bazargan also gave made the people of Iran the source of legislation:

Article 6: “In the Islamic Republic of Iran, the affairs of the country must be administered on the basis of public opinion expressed by the means of elections”

Article 177: “Revision of the Constitution of the Islamic Republic of Iran, whenever needed by the circumstances, will be done in the following manner … The decisions of the Council, after the confirmation and signatures of the Leader, shall be valid if approved by an absolute majority vote in a national referendum.”

Islam was no more than decoration in Bazargan proposal. Nevertheless a referendum on the 24th of October chose it as the new constitution for Iran.

In his memoires American president Carter said about Bazargan’s government: “He and his predominantly Western-educated cabinet members cooperated with us. They protected our embassy, provided safe travel for General Philip C. Gast, who had replaced Huyser, and sent us a series of friendly messages. Bazargan announced publicly his eagerness to have good relations with the United States, and said that Iran would soon resume normal oil shipments to all its customers.” [14]

So clearly, the anti-American rhetoric during Khomeini’s revolution was not an expression of the relationship between Khomeini’s revolutionary regime and the Americans, but a political strategy to ensure support for the revolution amongst the populace of Iran. The Iranian people were well aware of America’s many years of support for the Shah and therefore held America partly responsible for the oppression and tyranny during this era. This left Khomeini no other choice but to publicly denounce America, although behind closed doors he and his people worked closely with the Americans.

With this reality in mind the case of the occupation of the American embassy in Tehran, which  lasted from 1979 to 1981, should be reviewed and studied. Towards the end of 1979 it became apparent that Khomeini’s revolution was stalling and was in need of a new push. The Bazargan government had not been able to immediately improve the living conditions of most Iranians and the people began to question whether Khomeini would ever be able to. In addition, the intellectual elite, raised during the time of the Shah, had issues with many articles in the new constitution while some in the clergy did not feel comfortable with Khomeini’s political activities. [15]

On the 1st of November 1979 Bazargan met president Carter’s head of the National Security Agency (NSA), Zbigniew Brzezinski, in Algiers. Shortly after this meeting America gave the Shah permission to travel to America for medical treatment. The two events infuriated the Iranian public and were presented in the Iranian media as American efforts to return the Shah back to power. In response Iranian students entered the compound of the American embassy in Tehran on the 4th of November and took the embassy personnel hostage. During February of the same year a similar event had taken place. That time Khomeini had immediately ordered the students to return home. This time, however, all leaders in Khomeini’s revolution expressed support for the action of the students. On the 5th of November Khomeini, Ayatollah Behesti and Ayatollah Montazeri all expressed support for the occupation, separately but at roughly the same time. An indication that the hostage taking was part of a plan. Consequently, the Iranian public’s attention was moved from domestic issues to the “Great Satan” America. [16]

Two days into the hostage situation, the prime-minister Bazargan resigned. In January 1980 the Iranian people then elected a new prime-minister: Abul Hassan Bani Sadr. Bani Sadr had been in contact with the Americans since Khomeini’s stay in Paris. His contact at the CIA was Guy Rutherford. [16] Many years later Bani Sadr would confirm that the Iranian hostage crisis had been part of an American plan, the objective of which had been to strengthen Khomeini’s position domestically and give his regime a valid reason to meet America for discussions. [17]

The hostage crisis came to an end exactly the day Ronald Reagan entered the White House as president of the United States. The release of the American hostages was part of a treaty between Iran and America that became known as the Algiers Treaty. In addition to the release of the hostages through this treaty the two countries also agreed that America would not interfere in Iran’s domestic affairs, that the relations between the two countries would be managed through appointment of a third country intermediate, and that Iran would be returned some $12 billion of Iranian assets in America that America had confiscated following the revolution against the Shah.

[10] “Warning to America: ‘A False sense of Security will destroy you’ (Exclusive Interview With The Shah of Iran)”, U.S. New World Report, 1976

[11] “US Foreign Policy and the Iranian Revolution: The Cold War Dynamics of Engagement and Strategic Alliance”, Christian Emery, 2013, page 72

[16] Al Watan, Kuwait, 18 March 1979, page 1, through “Iran and the Revolution: An Exposure of American Plans”, through http://islamicweb.com/beliefs/cults/iranian_revolution.htm

Al-Assad and the Syrian Stalemate

America, Iran and the Middle East