The following is the second installment of RO’s series looking at the key devel­op­ments in Syria as the upris­ing reaches 3 years. By Adnan Khan Bashar al-Assad and his father before him maintained totalitarian control of Syria. The mere possibility of decent, let alone an uprising, was enough for the states intelligence services to kidnap in the hundreds or for whole towns to be bulldozed. The last uprising was in 1982 and it  resulted in...
21st March 20145 min 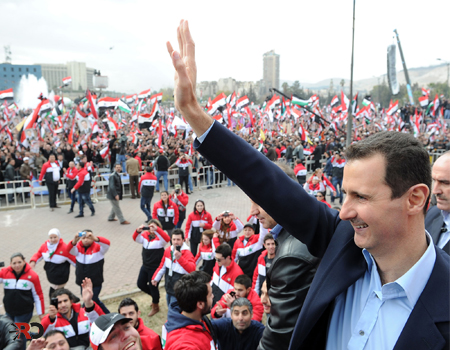 The following is the second installment of RO’s series looking at the key devel­op­ments in Syria as the upris­ing reaches 3 years.

Bashar al-Assad and his father before him maintained totalitarian control of Syria. The mere possibility of decent, let alone an uprising, was enough for the states intelligence services to kidnap in the hundreds or for whole towns to be bulldozed. The last uprising was in 1982 and it  resulted in a massacre in Hama. The city was besieged for 27 days in order to quell the uprising. So when the Arab Spring spilled into Syria, many around the world believed the regime would quickly quell the uprising. After 3 years Basher al-Assad has been barely able to maintain control and has lost large tracts of the country.  Despite carrying out indiscriminate air attacks, aerial bombardment, carpet bombings and the use of chemical weapons the al-Assad regime maintains a tenuous grip. There are 4 main reasons for this.

Firstly, the strength of Bashar al-Assad’s regime has really been a mirage. The regime was able to maintain its hegemony for decades due to the fear it instilled in the people through its notorious secret services. The Syrian security apparatus had been successful in clamping down on the entire country. Political dissent was virtually non-existent and any Syrian citizen wishing to travel abroad would have to pass a number of stringent security checks. When the uprising began in 2011 rebel forces not only attacked government buildings, but targeted the security apparatus, killing security personnel and driving others out of towns. In December 2012 Major General Abdulaziz al-Shalal – whose job was to monitor the security services for the regime – defected to the rebels saying he was leaving the “regime army” to join the “people’s revolution.”[1] Once this factor changed, the ears and the eyes of the regime were cut and al-Assad’s forces have since struggled to defeat the uprising. This is why much of the country is outside the control of the government today.

Secondly, although on paper the Syrian army consists of 220,000 soldiers, most of the Syrian infantry is composed of Sunni soldiers, who Assad could not rely on and thus he only had a small force to tackle the uprising. Consequently, the burden of the fighting fell on two elite units: the 4th armored division and the Republican Guard. Together, these formations only possessed a fighting force of around 30,000 men – less than 14% of the army’s total strength and they were forced to bear the lion’s share of casualties.[2] Basher al-Assad was forced to utilize only a small fraction of the army as he could not count on the loyalty of the majority, i.e.  the Sunni Muslims. The situation became dire by mid-2013 for Assad when the rebels began launching attacks on Damascus – the seat of the regime. Defected official Brigadier General Zaher al-Saket confirmed the Assad regime was on the verge of collapse, this is what led to the intervention of thousands of fighters from Hizbullah. By August 2013 matters were even more dire and in a telephone call intercepted by German spy chiefs, a senior Hezbollah commander told the Iranian embassy in Lebanon that Bashar Al-Assad launched the chemical attack which killed hundreds of people because he ‘lost his nerve’ in a moment of panic and worried that Damascus would fall to rebel troops.[3]

Thirdly, the decentralized nature of the rebel groups forced the regime to fight simultaneously across the country, overstretching the regime forces.  Conducting simultaneous operations crippled the regime which led to the army sustaining more losses than it could replenish. The rebel forces operated as a guerrilla force and and lacked a national-level command structure that could be attacked by regime forces. This created multiple centers of gravity for which the regime could not possibly target simultaneously, thus nullifying the risk of systemic collapse on the part of the rebels. As a result, the success the regime forces did have in terms of regaining territory in one part of the country did not have an effect on other parts. It also meant that the death of rebel leaders and fighters did not impact the overall rebel advance

Fourthly, as the uprising dragged on the regime lost the capacity to launch decisive operations to clear rebel held territories. As a result, the regime gave up on regaining the north of the country and the countryside. The amount of combat power the regime needed to secure and retain territory in the north became so high that it was not able to conduct operations quickly and efficiently. As a result, the regime gave up reclaiming the north of the country. The regime then focused on holding onto territory rather than conducting offensive operations. It began securing the heartland of the country which is the territory from De’ra to Latakia. Retaining terrain is now its main focus of the regime. This has mainly consisted of regime forces carrying out mass atrocities, inflicting heavy casualties on civilians in order to relieve pressure on territory in the heartland.

Despite Bashar al-Assad’s forces possessing more firepower and heavy weaponry, after three years, they have failed to defeat the people of Syria. Were it not for external support, the al-Assad regime would have fallen in 2013. Iran has played a central role in propping up the regime thorough economic support and deploying its revolutionary guards in the country. Similarly Hizbullah has played an active role in beefing up Syrian armed forces as many Syrian soldiers defected to the rebels. Bashar al-Assad has also received significant support from abroad as the West has turned the other way as he continued his massacres. These factors are what have  stoped the end of the al-Assad regime from complete collapse. Despite his al-Assad will need to ensure he survives every attack and every organized offensive, the Ummah of Syria just need to be successful once in order to achieve real change in the country.