By Mustaq Abu Aman “Jordan will not be a launching pad for any military action against Syria,” said spokesman Mohammad Momani, who is also the country’s information minister.[1] This statement, made a day after Jordan hosted a meeting of top commanders from Western and Middle Eastern countries, flies in the face of the 4,500 US troops holding mock military operations in Jordan in mid-June this year[2]. Those “war games” saw around 4,500 US troops, 3,000...
1st September 20135 min 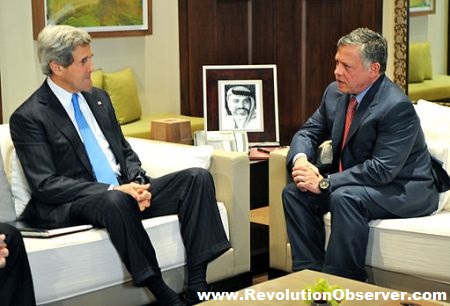 By Mustaq Abu Aman
“Jordan will not be a launching pad for any military action against Syria,” said spokesman Mohammad Momani, who is also the country’s information minister.[1] This statement, made a day after Jordan hosted a meeting of top commanders from Western and Middle Eastern countries, flies in the face of the 4,500 US troops holding mock military operations in Jordan in mid-June this year[2]. Those “war games” saw around 4,500 US troops, 3,000 Jordanian soldiers and 500 observers from 19 countries, including Britain, France, Italy, Qatar, Turkey and Saudi Arabia, participating in the exercise, staging battlefield, logistics, humanitarian exercises, rescuing hostages and indeed dealing with “terrorists”.
It begs the question whether the scene was already set for Western military intervention in Syria, possibly led by the US, and a mere pretext was a call in waiting? US media reports suggested the US was preparing to impose a ‘no-fly’ zone on Syria, which at that time was dismissed by White House officials.[2] Yet, one cannot dismiss the firepower being mobilised into the region. Washington sent a Patriot missile battery and F-16s to the kingdom for the 12-day manoeuvres, and decided to keep them there supposedly to counter the threat posed by the Syrian conflict.[2] Actual numbers of the artillery brought in by the US were kept secret by Jordanian officials, but on display during the mock exercises were six F-16s, two AV-8B Harrier jets, 28 tanks, and twenty armoured personnel carriers.[2]
For its part, Jordan has a rather ordinary military with size of a little over 100,000 as compared to neighbouring Syria with a force in excess of 300,000. However, with the desertion occurring over the 2 year conflict, the main fighting force of the Syrian regime is reportedly some 65,000[3]. Of course, although being a key US ally in the Middle East and a major beneficiary of US military and economic aid ($2.4 billion over past five years), Jordan’s ability to take any form of military action is tied to Washington’s dictates.[4] Washington is well known for creating a pretext for military intervention[5].
A pretext was needed and signals could be seen from Washington. What’s important to note is that the 2013 US-Jordanian War Games were carried out after the US gave warnings of possible chemical weapons being used in Syria. It was only 6 months prior, in early December 2012, that US President Obama warned Syria that the use of chemical weapons would be “totally unacceptable” and a “red line”[6]. The US claimed that they had intelligence on the Syrian movement of chemical weapons components.
Some prominent questions arise here – If the US had intelligence on chemical weapons being mobilised, why didn’t they engage UN inspectors at that time? Did the redline mean the US would intervene militarily? If so, why would the US seek to draw a red line for a regime it has had strong diplomatic ties with for decades? Would it be to do them a favour in light of the prolonged conflict and recent rebel victories? More compellingly, why after such a stern redline message, would Syria then proceed with the use of chemical weapons – would it be to intentionally cross the redline and trigger a pretext for US military intervention?
Any attempt to answer these questions could be dismissed as conspiracy theories. However, when seen in light of the current US plans for the military intervention in Syria, the potential target areas being near Homs and Latakia.[7] These are the very areas where the rebel forces have gained the upper hand in the past month, and hence any doubt that the US is not using the chemical weapons incident as a pretext to intervene for its own interests fizzles away. That of course, is complemented by the US stating that regime change is not part of their intervention plans. Obama’s December 2012 warning becomes hardly menacing.
The joint military operations in Jordan cannot be detached from Obama’s December 2012 redline warning and the current plans being laid for military intervention. Jordan, being a set piece for Western military intervention, cannot be overlooked in light of these developments. After all, Jordan as an entity has been at the crossroads of all past regional conflicts, and has faithfully served Western interests in return for keeping the Hashemite family in power.
[1] http://www.cbsnews.com/8301-202_162-57600441/jordan-no-attacks-on-syria-from-our-soil   [28/08/2012]
[2] http://www.france24.com/en/20130619-us-jordan-troops-hold-desert-war-games
[3] http://www.abc.net.au/news/2013-06-17/syria-tableau-sectarian/4760322
[4] According to official figures from http://gbk.eads.usaidallnet.gov/
[5] Manufacturing Consent, Edward S Herman & Noam Chomsky, 1988
[6] http://www.ndtv.com/article/world/barack-obama-warns-syria-against-using-chemical-weapons-300672
[7] http://www.bbc.co.uk/news/world-us-canada-23849386

Why the US Cannot Win in Egypt