By Adnan Khan The UK House of Commons Committees on Arms Export Controls – a UK oversight committee confirmed 17 July 2013 that the UK government approved 3,000 export licences for military sales to countries which it believes have questionable records on human rights. These exports to 27 countries exceeded £12 billion.[1] Global arms sales have always been a subject of contention as these weapons systems are fundamentally for war and where they end up...
21st August 20135 min 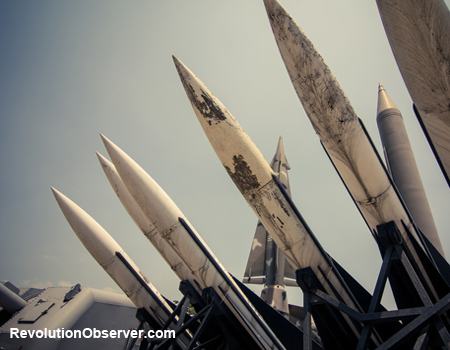 The UK House of Commons Committees on Arms Export Controls – a UK oversight committee confirmed 17 July 2013 that the UK government approved 3,000 export licences for military sales to countries which it believes have questionable records on human rights. These exports to 27 countries exceeded £12 billion.[1] Global arms sales have always been a subject of contention as these weapons systems are fundamentally for war and where they end up can never be regulated. The global arms industry is worth $1.7 trillion, which includes domestic military expenditures and global arms exports.[2] These amounts alone make the global defense industry a lucrative market. There are however four key aspects of this industry that have far reaching implications.
The global defense industry is dominated by one customer – governments. Without which the manufacturers of platform systems would never survive. Platform development is central to this market and only a handful of countries develop military platforms and even fewer countries develop multiple platforms. This is because developing an aircraft carrier, a fifth generation fighter jet or a missile defense system is a very expensive capital undertaking, which will take years to develop. Due to this, many countries in the west privatized their defense holdings which are now in the hands of private companies, e.g. Lockheed Martin in the US and BAE systems in the UK. As military systems can take decades to develop (It took 21 years for the F-22 raptor to be developed from inception to deployment [3]), such companies need guarantees that customers will purchase their eventual platforms. Thus governments around the world who need to construct their national security also become the number one customers.
Whilst the global arms industry is dominated by commercial interests, it is heavily interwoven with politics. Platform developers such as the US, Russia, France and the UK use military sales to reward loyal rulers around the world as well as create a critical dependency in national security. As the costs of platforms are so expensive, leaders of arms-producing countries conduct arms sales on behalf of private companies with countries who need such weapons. For example, President Obama’s recent tour of Africa included multiple arms exports.[4] The recipients of such arms and the government that most need them are usually the most repressive and anti-democratic. These factors are however overlooked as intense lobbying and funding for political parties comes from defense companies, and thus governments in the West act on their behalf. A report from the World Policy Institute in 2005 found that the US routinely funneled military arms to undemocratic nations.[5] US arms sales have long continued to the Egyptian armed forces as it repressed its people, and Bahrain continued to receive arms as it clamped down upon its people during the Arab spring.[6]
A nation’s defense industry has a significant stimulating effect on the wider economy. The heavy infrastructure and unique technologies needed lead to the development of new industries which create new jobs. America’s military–industrial complex when broken down is in reality a supply line that turns its 50 states into an assembly line for its military machine. This is why every congressmen of whatever persuasion supports the colossal defense budget as it will bring jobs, contracts and money into their state. The internet was originally a military application, termed ARPANET, which eventually led to the World Wide Web. In-car navigation systems rely on satellites that were put into orbit to guide ships, troops and missiles, whilst the Boeing 747, with its raised cockpit, was designed as a military transporter. It is not surprising that the world’s most militarily advanced nations also have the world’s largest consumer industries.
Carl Clausewitz, the German-Prussian soldier and military theorist is famous for stating “War is the continuation of Politik by other means.”[7] The bigger a nation’s defense industry the stronger its deterrence and the more power projection capabilities it will have. This is why the world’s powers have the largest defense industries. This is also the reason why countries such as China and India are taken more seriously on the international arena as they have the military force to back up their statements. China’s rapid economic development has been in parallel with its military ascent, as this military could be used to protect its commercial interests around the world. Iran’s acquisition and development of nuclear weapons would completely alter the security balance in the Middle East and this is why Israel has stood against Iran since it emerged that it had an active nuclear programme.
A cursory glance at the Muslim world shows a handful of countries have made some very unique military developments, but the majority are dominated by foreign platforms. Pakistan and Iran have developed large indigenous defense industries, especially in missiles, but lack self sufficiency as they have for the moment failed to develop multiple platforms themselves. Egypt has a large military, but its inventory is stacked with US platforms. Similarly Turkey is moving up the defense sophistication ladder, but has focused on applications rather than platforms. Without an indigenous defense industry a nation cannot be independent, let alone be able to partake in international affairs and influence them without a military to back this up. This is why it is no surprise that the nations with the largest defense budgets are also the world’s powers.