By Shafiul Huq Burmese President, Thein Sein, visited the UK and France in July to discuss trade, aid and democracy.[1] The visit came amid warming relations between Burma and the West as the country, struggling republic, undertakes “reforms” being hailed as a progress towards democracy. In November 2010 the Burmese military released the opposition leader, Aung San Suu Kyi, from house arrest. The government has also scheduled to hold presidential elections in 2015, and is...
20th August 20135 min 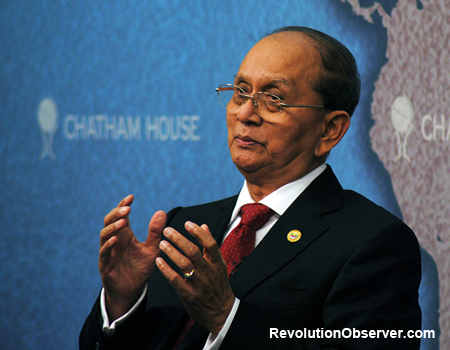 By Shafiul Huq
Burmese President, Thein Sein, visited the UK and France in July to discuss trade, aid and democracy.[1] The visit came amid warming relations between Burma and the West as the country, struggling republic, undertakes “reforms” being hailed as a progress towards democracy. In November 2010 the Burmese military released the opposition leader, Aung San Suu Kyi, from house arrest. The government has also scheduled to hold presidential elections in 2015, and is welcoming increased foreign investment. But what really lies behind this change?
Burma was under military rule for almost five decades since General Ne Win came to power through a military coup in 1962. Ne Win’s socialist-inclined economic policies almost brought the economy to a standstill. In 1988, Win was forced to step down due to widespread protests. Subsequently, a military council known as the State Law and Order Restoration Council (SLORC) – later renamed to State Peace and Development Council (SPDC) – became the governing authority, ruling the country with an iron fist until 2011.
The SLORC has been strictly against US influence in Burma. It refused to honour the 1990 election results in which the National League for Democracy, led by Aung San Suu Kyi, won the majority seats in parliament. As a result, the military junta put Suu Kyi under house arrest and resisted strong US pressures to release her as long as they remained in power. The US in turn built up strong international opinion against the regime and imposed sanctions on it in 1997 barring further US investments in Burma, benefitting financially from the joint project of the US oil company Unocal and the French company Total in the Yadana gas field.
In contrast, Britain, being the former colonial power in Burma, sought to maintain its influence in the country. Though it joined the international condemnation against the regime, it allowed British companies to invest in Burma earning the regime much needed revenue making it immune to the sanctions imposed upon it. According to the military junta, Britain was the second biggest investor in Burma at one stage.[2] Even the British educated Suu Kyi complained about British financial interests in Burma saying, “It is not right for the British government to do all it can to support human rights here and then to promote trade with Burma against democracy. The sort of involvement being suggested won’t help to bring about sustained economic and social development.”[3]
Since the SPDC handed over power to a “civilian” government after the November 2010 elections, Burma seems to have taken steps to appease the US, for example, releasing Suu Kyi from house arrest. The US has in turn eased sanctions against Burma and Thein Sein, the current Burmese President, has had the privilege of meeting both Hillary Clinton and Barack Obama in recent years. But despite these “reforms”, critics complain that the country remains firmly within the grip of the military as the parliament is dominated by members of military background, and Thein Sein himself was known to have been very close to the former dictator Than Shwe. Moreover, allowing Suu Kyi to run for the presidency will require a change in the country’s constitution, which currently bans people married to foreign nationals or having children with foreign nationality from running for the presidency. And no one is holding their breath for these changes to take place under the current government.
Recognising that real power still lies with the army, Britain is playing its old game to build strong links within the Burmese army by offering it training to help deal with the ethnic tensions in Burma.[4] It should be remembered that before granting independence to Burma, Britain structured the Burmese army along ethnic lines according to the 1945 Kandy agreement to leave behind military men loyal to the British. Hence this is not a new strategy.
On the economic front, Burma is inviting huge foreign investments and has started experiencing a “gold rush”. Foreign corporate giants such as Coca Cola, GE and Ford amongst many others have already signed deals and, with plenty of business opportunities remaining untapped, many more big deals are yet to come.[5]
While the West hails the political and economic changes taking place in Burma, it has turned a blind eye to the continued repression of ethnic minorities especially the Rohingyan Muslims. Burma refuses to recognise them as citizens, is seeking to enforce a two-child policy on them, and ethnic violence, which government forces are known to have taken part in, has caused 140,000 people to flee from their homes. Yet, President Thein Sein has received a peace award from the International Crisis Group[6] and is also nominated for this year’s Nobel Peace Prize for putting the country on a path to democracy.[7] Therefore, what we really see in these “reforms” in Burma is nothing but political games of global powers and economic gains for multinationals, while the regime continues shamelessly and brutally in its repression of innocent people.