By Adnan Khan Barack Obama, president of America had to issue a rebuke to Egypt’s military on Thursday, August 15, after images beamed around the world of the massacre taking place in Cairo, Egypt. In parallel, Obama repeatedly downplayed the killings of hundreds of civilians, insisting “We appreciate the complexity of the situation,” and that Egypt’s democratic transition could take “generations.”[1] Obama even went on to fault ousted President Mohamed Morsi, saying that “many Egyptians”...
17th August 20136 min 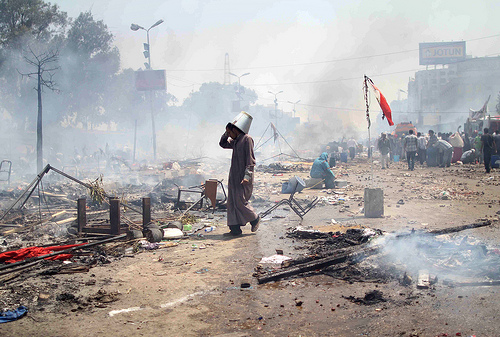 By Adnan Khan
Barack Obama, president of America had to issue a rebuke to Egypt’s military on Thursday, August 15, after images beamed around the world of the massacre taking place in Cairo, Egypt. In parallel, Obama repeatedly downplayed the killings of hundreds of civilians, insisting “We appreciate the complexity of the situation,” and that Egypt’s democratic transition could take “generations.”[1] Obama even went on to fault ousted President Mohamed Morsi, saying that “many Egyptians” didn’t like Morsi and that his ouster by the military was an “opportunity to pursue a democratic path.”[2] Hundreds  were killed by the Egyptian military and security forces as they cleared Muslim Brotherhood (MB) sit-ins – and the casualty figure continues to rise. The instability that continues to rock Egypt is due to one reason, and one reason only – external interference.
Egypt, the gateway to the Arab world, is the most important country in the region. For this reason the US brought Gamal Abdul Nasser to power in 1952, as outlined by Miles Copeland, a CIA operative, in his 1970 book ‘The Game of Nations,’ and later in his memoirs in 1989, ‘The Game Player’. America’s political influence dramatically increased in the region with the charismatic Nasser doing America’s bidding. Even after Nasser’s death, America’s stranglehold over Egypt did not diminish and Anwar Al-Sadat and Hosni Mubarak both protected US interests in the region. Anwar Sadat normalised relations with Israel in 1979 through a peace treaty in return for continued US aid – which has been in excess of $70 billion since 1948.[3] Hosni Mubarak maintained that status quo which secured America’s position on Palestine and Israel’s in the region. From America’s perspective, political stability in the form of successive military dictatorship institutionalised America’s grip on Egypt and the region.
The Arab Spring however challenged this decades-old arrangement. As the protests increased in size and scope, the US switched sides, dropping Mubarak and leading to the emergence of the Muslim Brotherhood (MB) as a political force. Relations between the MB and the US go back over a decade. Milt Bearden, whose 30-year CIA career included long service in the Muslim world, said back in 2005: “I can guarantee that if you go to some of the unlikely points of contact in the Islamic world, you will find greater reception than you thought. The Muslim Brotherhood is probably more a part of the solution than it is a part of the problem.”[4]  President Mohammed Morsi maintained the peace treaty with Israel and refused to implement Islamic sharia law, in effect maintaining the status quo. Very quickly Egypt descended into chaos due to Morsi’s arbitrary decision making, constant backtracking on decisions, and overall incompetence. The political stability needed for the US to use Egypt as a bulwark in the region began to waiver. America’s removal of Morsi through the army was confirmed in a New York Times piece: “His (Morsi) top foreign policy adviser, Essam el-Haddad, then left the room to call the United States ambassador, Anne W. Patterson, to say that Mr. Morsi refused (America’s offer to step down). When he returned, he said he had spoken to Susan E. Rice, the national security adviser, and that the military takeover was about to begin.”[5]
The subsequent political vacuum led angry MB supporters to the streets, effectively bringing the capital to a standstill. The army rounded up the MB leadership and effectively put Hosni Mubarak’s defunct regime back into power. In less than two months since Morsi’s ousting there has been a raft of diplomatic activity. Deputy Secretary of State William Burns visited Egypt on July 15th and later  that same month the EU foreign minister also met Morsi in prison, but did not reveal any of her discussion points with him. Diplomats from several countries, including the US, were in Cairo in early August to cobble together an agreement offering incentives for the MB to end the protests and accept the end of Morsi’s rule. The UK’s Independent confirmed that a face-saving deal in which the toppled President could be released from detention and allowed to officially “resign” his position in a televised addressed was put on the table and rejected by Morsi.[6] As these talks faltered, Egypt’s military announced it would clear the sit-in protests with an operation. On August 14th the massacre took place as talks had failed.
America’s interference in Egypt is directly responsible for the bloodshed in the country. America made sure that whenever its stranglehold was in trouble, it replaced its surrogates to meet the demands of the people. Egypt’s military has for long put America’s interest before its own people, and whilst many have backed the army in its overthrow of Morsi, they are mistaken as in the long run this will only strengthen America’s grip on Egypt. Many can now see that American interference is the problem in Egypt; Mark Lynce commented in Foreign Policy magazine: “It’s time for Washington to stop pretending. Its efforts to maintain its lines of communication with the Egyptian military quietly mediate the crisis and help lay the groundwork for some new, democratic political processes which have utterly failed. Egypt’s new military regime and a sizable and vocal portion of the Egyptian population have made it very clear that they just want the United States to leave it alone. For once, Washington should give them their wish. As long as Egypt remains on its current path, the Obama administration should suspend all aid, keep the embassy in Cairo closed, and refrain from treating the military regime as a legitimate government.”[7]
[1] http://www.nytimes.com/2013/08/16/world/middleeast/obama-statement-on-egypt.html?pagewanted=all
[2] Ibid
[3] http://www.fas.org/sgp/crs/mideast/RL33003.pdf
[4] http://www.usnews.com/usnews/news/articles/050425/25roots_7.htm
[5] http://www.nytimes.com/2013/07/07/world/middleeast/morsi-spurned-deals-to-the-end-seeing-the-military-as-tamed.html?pagewanted=all
[6] http://www.independent.co.uk/news/world/africa/egypt-mohamed-morsis-allies-admit-defeat-and-plot-to-fly-him-into-exile-8745525.html
[7] http://www.foreignpolicy.com/articles/2013/08/14/enough_is_enough_egypt_cairo_violence_obama_administration
* Image: Creative Commons / Flickr / Globovision
previous

Sino-US Relations: An Abundance of Tensions