By Adnan Khan Chinese premier Xi Jinping’s visit to the US in early June was his first as the new president of China, gaining much global media coverage, with American news station, CBS, calling it the most important meeting between American and Chinese leaders since Nixon and Mao.[1] The meeting took place in an informal setting, with some calling it the “shirtsleeves summit.”  Summits and meetings between the two powers have been a constant feature...
7th August 20136 min 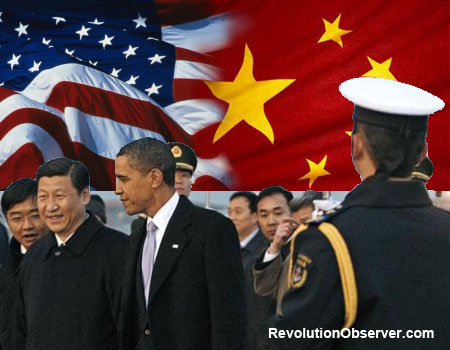 By Adnan Khan
Chinese premier Xi Jinping’s visit to the US in early June was his first as the new president of China, gaining much global media coverage, with American news station, CBS, calling it the most important meeting between American and Chinese leaders since Nixon and Mao.[1] The meeting took place in an informal setting, with some calling it the “shirtsleeves summit.”  Summits and meetings between the two powers have been a constant feature since China’s “opening and reform era” under Deng Xiaoping. There are a number of fundamental issues between the two countries which will be difficult to resolve as they relate to the international position of both countries as world powers.
China’s rapid rise has turned it into the world’s largest economy after the US. China is officially the world’s largest exporter, exporting over $2 trillion a year.[2] The US, the world’s largest consumer, imports the vast majority of the goods that come off China’s production lines. Unsurprisingly, the US had a trade deficit of $315 billion at the end of 2012 with China.[3] In turn, the expansion of China’s manufacturing base has led to the country’s need for a larger share of the world’s oil and mineral resources. This has also led to the loss of jobs in America’s manufacturing sector in the face of  superior and cheaper Chinese craftsmanship. Economic conflict continues to grow due to China’s manipulation of its currency. The US has imposed a raft of tariffs on Chinese goods destined for the US market. Trade disputes are becoming a common feature of Sino-US relations, with causes ranging from US tariffs on steel imports and tires to China’s domination of rare earth elements. This relationship is damaging the US due to China’s ability to undercut US manufacturers which are going out of business.
China’s economic rise has been in parallel to its military ascent. Militarily, China has undergone considerable developments which has led it to become very bold and aggressive in its territorial claims. After decades of diplomacy and economically driven policies, China is much more confident in its claims. The development of a blue sea navy is how China plans to defend itself in its region.[4] Its rapid naval development to protect its borders has worried the US. The US has attempted to counter this through deepening military ties to nations surrounding China, military deployments to the region [5] as well as using North Korea’s aggression (missile tests and its pursuit of nuclear weapons) as an excuse to interfere in the region. The US military has various military systems to deal with any Chinese aggression, however China has a real presence in the region, whilst the US just has a coastline thousands of miles away from the Asia-pacific.
America’s relations with North Korea have been central to containing China. Ever since North Korea began conducting nuclear tests, the US has always offered North Korea incentives for closing down its nuclear activities, but has never delivered on its promises. This is why North Korea has always resumed its nuclear activities. The US refuses to directly negotiate with North Korea and uses the six party talks for negotiations which has only prolonged the issue. One analyst outlined America’s objectives as, “These US troops are in the region not simply to fight the ‘terrorist groups’ causing local instability, but to enhance U.S. military control over territory in the South China Sea. The expanded US presence and nascent military alliances with Southeast Asian nations exacerbates Chinese anxieties.”[6] China has attempted to unify both North and South Korea, but the continuing bold statements and actions by North Korea due to US provocations have resulted in a continued US presence in the region under the guise of curbing North Korean aggression.[7]
China’s cyber capabilities have gained much media coverage as an untold number of intrusions and attacks on military, government and corporate systems have been traced back to mainland China. Cyber warfare provides China with an asymmetric advantage to deter aggression from stronger military powers as it catches up in traditional military capabilities. China’s military is in the midst of a C4ISR  (Command, Control, Communications, Computers, Intelligence, Surveillance and Reconnaissance) revolution. The US has also been engaged in cyber activities, according to the United States. NSA secret service whistleblower Edward Snowden, organizing hacker attacks on Chinese universities, businesses and politicians since 2009.[8] Cyber warfare gives both nations the ability to spy on each other and steal secrets and represents the covert aspect of Sino-US relations, allowing both nations the ability to deny attacks as true identities are difficult to detect in cyberspace.
China is now challenging US hegemony in South East Asia, which is the only challenge the US has faced to its power since the fall of the Soviet Union. China has undergone some radical changes in the last few decades, however these changes are not due to a transformation of its beliefs, but the confidence and ambition that China should be the dominant power in the region. China’s ambitions are driven by its national interests rather than any ideology. This is different to the US, as it possesses a vision that its culture and way of life should be the reference point for the whole world. The main obstacle for Chinese domination is a country that is not even a resident of its neighbourhood. Thus, despite the niceties of dialogues and summits, Sino-US relations will always have tensions as they continue to compete for dominance in South East Asia.
[1] http://www.cbsnews.com/video/watch/?id=50148562n
[2] http://www.wto.org/english/res_e/statis_e/statis_bis_e.htm?solution=WTO&path=/Dashboards/MAPS&file=Map.wcdf&bookmarkState={%22impl%22:%22client%22,%22params%22:{%22langParam%22:%22en%22}}
[3] http://articles.washingtonpost.com/2013-02-08/business/36991029_1_trade-deficit-record-exports-auto-exports.
[4] http://www.fas.org/sgp/crs/row/RL33153.pdf
[5] http://www.fas.org/sgp/crs/row/RL33153.pdf
[6] http://www.fpif.org/papers/asia2002.html
[7] http://www.fpif.org/papers/asia2002.html
[8] http://www.dailymail.co.uk/news/article-2340295/Im-traitor-hero-Im-American-NSA-whistleblower-Edward-Snowden-speaks-Chinese-newspaper.html
previous