By Adnan Khan US president Barack Obama wrapped up his tour of Africa from June 22 – July 2 in Tanzania and stated: “If somebody says they want to come build something here, are they hiring African workers? If somebody says that they want to help you develop your natural resources, how much of the money is staying in Africa? … Don’t just assume that folks come here and they’re automatically benefiting Africans. And that...
31st July 20135 min 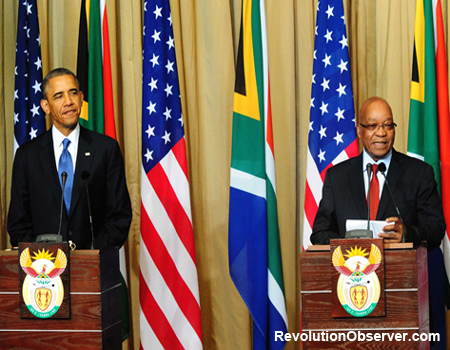 By Adnan Khan
US president Barack Obama wrapped up his tour of Africa from June 22 – July 2 in Tanzania and stated: “If somebody says they want to come build something here, are they hiring African workers? If somebody says that they want to help you develop your natural resources, how much of the money is staying in Africa? … Don’t just assume that folks come here and they’re automatically benefiting Africans. And that includes the United States. Ask questions in terms of what we do.” [1] Whilst this statement was intended at China, the African continent has a long history of being exploited by foreign powers. It was colonized by the European powers in the 18th and 19th century, and whilst many of them have left, the exploitation and abuse of the continent continues. Obama’s visit was a pledge of continued US presence in the continent and this presence has four aspects to it.
The continent’s history has been dominated by European colonialism.While the US has always had relations with Africa, the US took more of an active interest in the continent during the 1960’s. The creation of the United Nations (UN) after WWII included some clauses related to the elimination of colonialism, and by the 1960’s, the world’s powers began to practically discuss the elimination of colonialism in Africa. The US took the position that the African states should be independent and free from European colonialism and as a result of this, it supported many nations and movements with aid and loans. While the Europeans competed with each other for the continent’s riches, the 1960’s also saw intense competition between the US and the Soviet Union for their influence in Africa. Although many countries were able to free themselves from European colonialism, the US as well as the Soviet Union were merely looking to replace Europe.
The arrival of the Neoconservatives into the US administration saw a change of policy on Africa. The US shifted from supporting states with economic aid and loans to expanding its military presence under the guise of the war on terror. America expanded in military presence in the region, established new military bases, and forged new links with military dictators and armed forces on the continent. The establishment of AFRICOM – America’s military command on the continent, led to ties with 35 countries in order to use their military bases, as well as supply lines and the airspace of those countries. The militarisation of the continent has been central to US plans in fighting those calling for Islam in Somalia and without US military assets, the intervention in Libya would have been near impossible by Britain and France. The fruits of expanding its military presence can be seen with what took place in Mali. The coup that took place in the country which led to turmoil and the eventual western intervention, was with the help of the US. US diplomats confirmed that: “the coup leader Captain Omedua Ahmedou Haia Sanogo had been chosen from among elite officers by the U.S. Embassy to receive military training to combat terrorism in the United States.“[2]
Another aspect to US relations with Africa, is China’s expansion into the continent. China’s demand for raw materials and energy, has resulted in it becoming an important player on the continent. It has surpassed the US as Africa’s largest trading partner.[3] US senators have lamented over weakening US political influence due to China’s increasing investment in infrastructure projects for which African nations are seeking funding. Whilst China does not pose a challenge to the US as the Soviet Union did in Africa, China-Africa relations are largely commercial. For the moment, China is investing in African infrastructure and a number of energy projects, unlike the Europeans and the US who exploited the continent. This commercial interest, does however give China much political leverage if it decided to use it.
Another aspect to US-Africa relations is energy. The US today consumes around 19 million barrels of oil a day (bpd) Domestic production from US oil fields accounts for only 10 million (bpd), the remainder is imported.[4] For over a decade, Africa has become central to America’s strategy of energy diversification. African oil remains strategically important for the US, as it provides an alternative to the oil from the Middle East. West Africa specifically is geographically closer to the US, making transportation less costly than oil from the Persian Gulf. The high-quality sweet crude that is produced by the Gulf of Guinea states, is crucial to the US market. As such, US oil corporations are doing whatever they can to secure this important hydrocarbon and Washington is fervently promoting free trade in Africa in order to make it easier for them. Africa is home to two of the largest oil-producing states: Nigeria and Angola. These two states account for 53% and 26% of total US petroleum imports from Africa respectively.[5] Thus, it is no surprise that the two states also receive the largest share of US security assistance in Africa.[6]
Obama’s visit to Africa was to ensure US interests are secured for the foreseeable future. European colonialists used similar pretexts of development and aid to expand into the region and as a result the people suffered under the yolk of poverty and exploitation. Today, European powers generally have been replaced by the US, however what has not been replaced is foreign attempts to exploit the region.
[1] http://www.washingtontimes.com/news/2013/jun/30/obama-africa-be-wary-foreign-powers-even-us/#ixzz2Z26Re100
[2] https://www.commondreams.org/headline/2012/03/24-1
[3] http://www.worldaffairsjournal.org/blog/gordon-g-chang/america-versus-china-africa
[4] http://www.eia.gov/tools/faqs/faq.cfm?id=727&t=6
[5] http://www.eia.gov/dnav/pet/pet_move_impcus_a2_nus_ep00_im0_mbbl_m.htm

Leaders of the Syrian Revolution

Sino-US Relations: An Abundance of Tensions