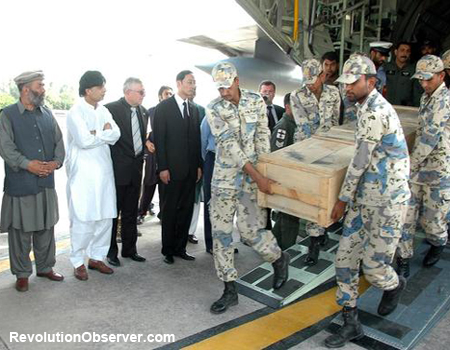 By Adnan Khan
Pakistan’s Interior Minister, Chaudhry Nisar Ali Khan, unveiled Pakistan’s first national counter terrorism strategy on Tuesday, August 13th. The National Counter Terrorism and Extremism Policy proposed to combat terrorism through sweeping reforms in Pakistan’s education system, judicial system and foreign policy. The interior minister issued the report to parliament in order to try to reach political consensus through voting, however, it remains unclear as to how long the process may take since no timeline on its implementation was given. The main aspect of the report was that militants are far ahead of the Pakistani state in organization and technology. The counter terrorism strategy is built upon a narrative that completely contradicts the facts on the ground, and is based around a number of assumptions that are politically motivated.
The first of these facts is the cause of the instability in Pakistan. When the US began its invasion of Afghanistan after the events of 9/11, the Bush administration believed, with the support of Pakistan, its aims could be achieved by restricting the size of its military footprint in the country. When Obama came to power and with most of the country in the hands of the Taliban[1], he increased America’s presence in Afghanistan through various surges alongside Pakistan playing a much larger role in actively pursuing the war in the tribal areas. The US effectively ordered Pakistan to conduct operations in the tribal areas to root out the Haqqani network and those loyal to the Taliban. The US wanted Pakistan to give up its support of proxy groups which they previously backed and funded. Indeed, using Pakistan to defeat the Soviet Union was still fresh in the minds of US politicians.
Pervez Musharraf immediately joined America’s war on terror, even describing it in Pakistan’s national interests. He was, however, eclipsed by his replacement General Ashfaq Parvez Kayani, who completely embraced the notion of this war as well. As Lieutenant, General Kayani led the Lal Masjid massacre for which he was duly rewarded with 4 stars and the top job when Musharraf stepped down. Under Kayani the army carried out various operations in the tribal areas. Areas targeted by the army witnessed massive and severe bombardment with helicopter support leading to massive displacement of the local population. Pakistan intelligence services provided the US with intelligence on targets for drone attacks which inevitably led to the deaths of thousands of men, women and children. General Kayani unilaterally carried out US demands and shifted the military’s posture towards the tribal areas. He also announced on Pakistan’s Independence Day in 2012 that the foremost threat to Pakistan’s security is internal. This represented a radical departure from the past in which the threat perception was entirely external and India-focused.[2]
There is no consensus on how to tackle the Jihadist threat that Pakistan apparently faces. Some in the government have supported the armies operations whilst others have called for negotiations. The civilian government on a number of occasions launched direct negotiations when the army was conducting operations. All of the groups the army is currently fighting are proxy groups Pakistan established in the past. An alliance of several domestic Jihadist groups have now turned their guns against Islamabad. The deaths of many civilians have led some to carry out attacks in mainland Pakistan, turning the violence into a vicious cycle.
Prior to the US invasion of Afghanistan, suicide bombings and Improvised Explosive Devices (IED) were unheard of in the country. America’s presence in the region and its subsequent drone war is the central reason why many Jihadi groups have turned their guns on Pakistan, something the counter terrorism strategy refused to acknowledge. It has now been four years since Islamabad launched a major counterinsurgency offensive in the tribal areas. This development is parallel to the increasing use of drone strikes in the same region. These strikes have long been exposed as random attacks that have mostly killed civilians. For instance, London’s Bureau of Investigative Journalism released a leaked Pakistani report July 2013 detailing numerous civilian casualties by US drone strikes.[3] The US has now admitted that they have always been conducting signature strikes, strikes against targets that happen to fit a pattern which they particularly consider hostile. This random targeting of civilians by the US is the fundamental factor leading to internal conflict by proxy groups within Pakistan.
Pakistan’s counter terrorism strategy fails to acknowledge who the real enemy is and fails to understand that the war in Afghanistan initiated by the US is the main cause of the instability in the region. It should also be remembered that in the 1980’s, Pakistan was left to pick up the pieces once US interests had been secured. The grievances of the groups who have taken up arms against Pakistan can be easily addressed if the government abandons America’s war in Afghanistan and conducts peace negotiations. Whilst Pakistan has been conducting military operations the US has being doing the opposite and pursuing a deal with its enemy. The US is currently working on negotiations with the Taliban – which is in and of itself an admission of defeat. Thus, Pakistan’s counter terrorism strategy illustrates that the current crop of leaders have placed US interests before Pakistan’s. This clearly shows that the long term solution to Pakistan’s internal problems is negotiations that results in a peace deal and not military conflict.
[1] http://news.bbc.co.uk/1/hi/world/south_asia/8194230.stm
[2] http://lubpak.com/archives/227063

Will the US Attack the Syrian Regime?