By Adnan Khan The coup against the Muslim Brotherhood (MB) government in Egypt has once again brought to light the influential role the military plays in the country. Muhammad Morsi and the MB were powerless as General Abdul Fatah al-Sisi announced the removal of the democratically elected government. Over 300 MB officials were rounded up overnight and effectively placed under arrest. The military had already organised with the opposition, secular elements and Coptic Christians, as...
12th July 20136 min 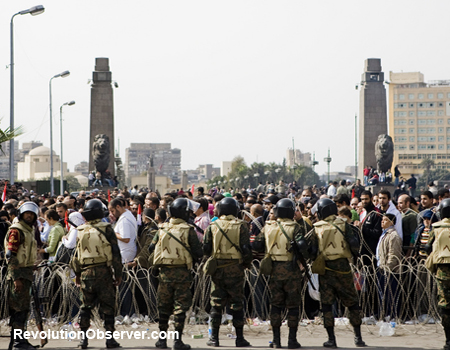 The coup against the Muslim Brotherhood (MB) government in Egypt has once again brought to light the influential role the military plays in the country. Muhammad Morsi and the MB were powerless as General Abdul Fatah al-Sisi announced the removal of the democratically elected government. Over 300 MB officials were rounded up overnight and effectively placed under arrest. The military had already organised with the opposition, secular elements and Coptic Christians, as well as Al-Azhar on the post MB setup.[1] The army once again proved it was the real power in the country, despite the elected government’s win at the polls just a year ago. This influence can be seen from a number of factors across the breadth of the country.
The Egyptian Army took power in July 1952 in a US backed coup to oust the British puppet King Farooq. The CIA project was outlined by Miles Copeland, a CIA operative, in his 1970 book ‘The Game of Nations,’ and later in his memoirs in 1989, ‘The Game Player.’ The Free Officers Movement, a group of largely junior military officers, established a new political system which turned the military into the most organized and important institution in the country. In 1956 Gamal Abdul Nasser took on the role of president of Egypt. Nasser nationalised the Suez Canal, which led to war with Britain, France, and Israel and in the process made Nasser a national hero which enhanced his stature in the wider Arab world. [2] The loss to Israel in the six day war of 1967 led to a decision by the military leadership to move away from actual day-to-day governance, leaving this in the hands of a civilian leadership, whilst keeping foreign policy, defence and the national budget firmly under its control. To date, promotions to senior ranks are only made after heavy screening for political and Islamic leanings.
Today, the Egyptian military is the largest in Africa and the Middle East, and the 10th largest army in the world.[3] The National Services Projects Organization and the Egyptian Organization for Industrial Development dominate the Egyptian economy through a variety of joint ventures with both domestic and international manufacturing firms for the army. The military is involved in the industrial and service sectors, including weapons, electronics, consumer products, infrastructure development, agribusinesses, aviation, tourism and security.[4] Similarly the majority of Egypt’s regional governors are retired army officers. Many of the big civilian institutions and public sector corporations are run by former generals. The country’s three main land-developing authorities (agricultural, urban and tourism) are headed by former military officers. The army is heavily involved in the national economy; according to some estimates as much as 40% of the Egyptian economy is controlled by the military and they would for obvious reasons want to maintain such a position.[5]
The Egyptian military has played a central role in protecting US interests in the region. [6] Ever since the military coup in 1952, the US has showered the Egyptian military with aid in excess of $30 billion.[7] This US aid is in effect bribe money to maintain the regional balance, which Egypt’s military leaders have been more than happy to implement. Egypt’s current defense chief, Abdel Fattah al-Sisi, is an alumnus of the US Army War College in Pennsylvania, while the head of Egypt’s air force, Reda Mahmoud Hafez Mohamed, did a tour in the United States as a liaison officer. More than 500 Egyptian military officers train at American military graduate schools every year. There’s even a special guest house in northwest Washington, D.C., where visiting Egyptian military officials stay when in the American capital.[8] The peace treaty with Israel, signed in 1979 under US sponsorship, is the foundation of the regional balance of power. It ended the state of war with Israel, and designated the Sinai as a demilitarized buffer zone between the two countries, effectively eliminating the threat of nation-to-nation war, and thus strengthening Israel. [9]
The military’s role in Egypt has ensured no other rival institution could ever develop. As a result, most of the institutions of state are either corrupt or dripping in cronyism. With an economy disproportionality in the hands of a few, a career in the military is the only certain way to make ends meet in such a dysfunctional economy. While military personnel are recruited from villages and towns across the country, there are only nine commissioned positions. Consequently, reaching senior positions in the Egyptian military turns into an exercise of whom you know. This architecture helped the leadership of the Egyptian military maintain loyalty within the ranks; as only officers trained in the US and filtered carefully can reach senior positions.
Former president Morsi’s removal of the military’s two top generals early in his presidency, was seen as a bold move that asserted his position as the supreme leader of the armed forces. [10] But the fact of the matter was that Morsi didn’t actually take control of the army. The General that Morsi appointed, Abdul Fattah al-Sisi, was the military’s next-in-line, and was, in the end, the man who handed to Morsi his pink slip. The Muslim Brotherhood thus never had real power, as they never changed this political reality. With the Egyptian army’s monopoly of power and economy, the only way to effect actual change is an overhaul of the military’s architecture that abolishes the current system and returns the military to its natural functions.
[1] http://www.themalaysianinsider.com/world/article/egypt-orders-arrest-of-300-islamists
[2] http://en.wikipedia.org/wiki/Gamal_Abdel_Nasser
[3] https://en.wikipedia.org/wiki/Egyptian_Armed_Forces
[4] http://www.jadaliyya.com/pages/index/3732/
[5] http://www.nybooks.com/articles/archives/2011/aug/18/egypt-who-calls-shots/
[6] Jeremy M. Sharp. Egypt: Background and US Relations. http://www.fas.org/sgp/crs/mideast/RL33003.pdf
[7] http://news.nationalgeographic.com/news/2013/07/130705-egypt-morsi-government-overthrow-military-revolution-independence-history/
[8] http://killerapps.foreignpolicy.com/posts/2013/07/02/soldiers_trained_by_us_threatening_to_overthow_egypt
[9] https://en.wikipedia.org/wiki/Israel-Egypt_Peace_Treaty

Egypt After Morsi: Chaos or Bloodshed?