By Adnan Khan As Israel continues to bombard Gaza indiscriminately, Egyptian-Israeli relations are once again in the spotlight. The Egyptian-Israeli peace treaty, in place since 1979, has come under intense pressure ever since the Muslim Brotherhood’s (MB) Mohamad Mursi became president of Egypt, earlier this year.[1] The treaty has been the bedrock of Israeli national security, securing Israel’s southern border, allowing it to redeploy troops elsewhere. With the agreement in place it meant the national...
23rd November 20124 min 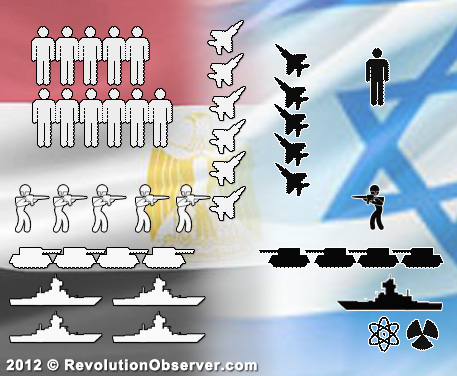 As Israel continues to bombard Gaza indiscriminately, Egyptian-Israeli relations are once again in the spotlight. The Egyptian-Israeli peace treaty, in place since 1979, has come under intense pressure ever since the Muslim Brotherhood’s (MB) Mohamad Mursi became president of Egypt, earlier this year.[1] The treaty has been the bedrock of Israeli national security, securing Israel’s southern border, allowing it to redeploy troops elsewhere. With the agreement in place it meant the national security of Israel was no longer in question as Egypt, the only real Arab power in the region, was no longer viewed as an enemy.
The State of Israel has always had a single national security objective; to ensure the continued existence of Israel. However, Israel occupies a small geographic area that lacks strategic depth. A hostile fighter jet could fly across all of Israel (40 nautical miles wide from the Jordan River to the Mediterranean Sea) within four minutes. Unable to field a large army due to its small Jewish population, it must rely on its reserves, which in turns increases its sensitivity to civilian and military losses. To make up for quantitative disadvantages, Israel maintains a high level of unpredictability and aggressive posture. The Israeli Defence Forces (IDF) makes up for its lack of size by superior maneuverability and firepower. Israel’s fundamental challenge is that it is surrounded by Muslim lands and in any war the lack of strategic depth would mean significant fighting and losses within Israeli occupied territory.
Egypt, the largest country in the region and with a population eleven times the size of Israel, can field a military that will outnumber the IDF, which means it can absorb casualties at a far higher rate than Israel. Thus, the Egyptian military has the ability to engage in an extended, high-intensity battle that would break the back of the Israeli military with a rate of attrition that Israel would not be able to sustain. If Israel was forced to simultaneously engage with the other countries it shares borders with, dividing its forces and supply lines it would run out of troops long before Egypt, even if Egypt were absorbing far more casualties.
In a war situation between the two countries, air and territorial superiority would need to be gained. Egypt vastly outnumbers Israel in terms of ground forces personnel. Both nations have around 3700 tanks, with the backbone of Egypt’s arsenal being made up of 1004 M1A1s Abrams battle tanks, the world’s preeminent tank. Half of Israel’s tanks are the indigenously developed Merkava tanks; Hezbollah exposed the tanks vulnerabilities in 2006 by destroying many of them when Israel invaded Southern Lebanon.
Israel has superior air power with more modern aircrafts. Israel’s 412 fighter aircraft include 100 F-16I, 27 Boeing F15A Eagle, seven F15B and 90 F16A Fighting Falcons.[2] Egypt’s air Force has around 579 combat aircraft of which 216 are F-16s. Both Israel and Egypt have large coastlines, but both still focused on air and ground forces rather than their navies. Egypt’s navy is four times larger than Israel’s, but Israel possesses more modern sea assets. The sheer size of Egypt’s navy means they could swarm Israeli waters blocking Israeli access to the sea and rendering much of its naval assets useless.
Many quote Israel’s capture of the Sinai Peninsula and its defeating multiple Muslim armies as an example of Israel’s superiority in war. The 2006 war in south Lebanon exposed Israel’s Achilles Heel. Its military has been constructed to be mobile and flexible in dealing with large conventional forces in the region. However the asymmetric tactics of Hezbollah in 2006 led to Israel to fail in its attempt at weakening Hezbollah.
The regional balance is currently propped up by the myth of Israeli military invincibility, something which has been the cornerstone of its aggressive stance in the region for decades. Israel’s modern army is counterbalanced by the sheer number of troops and popular mandate for action Egypt possesses. Lack of Egyptian political will ensures Israel is still able to hide behind the facade of being the regional power.