By Abu Anas The Israeli assassination of Hamas’ military chief has escalated to a larger conflict, where on one side Hamas is storming Israel with rockets and on the other Israel threatening a full ground invasion of Gaza. Hamas has threatened to make this Israeli aggression into a “hell” burning the perpetrators. In response, the Knesset, Israel’s parliament, approved a call-up of 75,000 reservists for deployment by the army in the case of an escalation in the...
19th November 20125 min 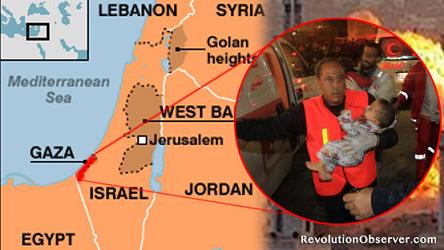 The Israeli assassination of Hamas’ military chief has escalated to a larger conflict, where on one side Hamas is storming Israel with rockets and on the other Israel threatening a full ground invasion of Gaza. Hamas has threatened to make this Israeli aggression into a “hell” burning the perpetrators. In response, the Knesset, Israel’s parliament, approved a call-up of 75,000 reservists for deployment by the army in the case of an escalation in the conflict.[1] To completely understand the situation, a political observer must understand the tangled web of relations and interests of the world and regional players in respect to the conflict.
The American stance has always been unrelenting in support for Israel’s aggression in Gaza. The Israelis have been in negotiations for months with the US regarding the way to deal with the Iranian nuclear program. These negotiations occurred during the many visits that the US high-level administration and military officials have taken to Israel, like the one by Gen Dempsey in late October.[2] Both sides have reached a deal whereby the Israelis would delay a unilateral strike until next summer and in return the US would provide four things in return. First, continued support in the missile defense system in northern Israel for additional protection from the Iranian ballistic missiles. Second, increased financial support for the Iron Dome program, built by Israel defense manufacturer, RAFAEL. Third, pressure Iran to comply with a treaty of Nuclear non-proliferation within the Middle East.[3] Fourth, is full support on an invasion on Gaza, which is unraveling right now. The Europeans, especially the British, angered due to being sidelined by these negotiations, have been a loud critic against an Israeli invasion of Gaza.
The Egyptian government has opened the previously closed Rafah border, only allowing injured to pass to hospitals for treatment and then return back to Gaza. An Egyptian journalist sets even a gloomier picture on the border stating that “there are trucks full of humanitarian aid trying to get into Gaza through Rafah that are not being let through.“[4] Egypt is concerned with its own interests that is to prevent Palestinians from settling in Egypt. Additionally, the Muslim Brotherhood (MB) does not want to disturb Egypt’s relationship with Israel that is agreed upon in the Camp David accords, therefore they have restricted any support from reaching Gaza. This dichotomy within the MB’s personality is due to their pragmatic approach to politics, which sidelines their Islamic ideological principles for a more cost-benefit analysis of their interests. The MB still has to cater to their constituency and that is how the visit by the Egyptian prime minister should be understood, as an act of showing emotional solidarity for public consumption.
The other Arab regimes have been silent on the conflict, where Nabil al-Arabi, secretary of the Arab League announced that he will lead a delegation of Arab prime ministers on a visit to Gaza on November 20th.[5] This move and others by the Tunisian and Moroccan Prime Ministers have the same purpose of catering to the public outrage at home by showing token acts of solidarity, which does not amount to any real political action. The Syrian regime might benefit from getting out of the world’s media spotlight, therefore committing more egregious atrocities. On the other hand, the Jordanian regime might be under more pressure due the public’s anger which will inevitably increase as more and more Palestinians are killed in Gaza.
Hezbollah, in Lebanon, has been forecasted to act in-sync with Hamas to support their axis-of-resistance teammate, according to some analysts. Hezbollah is not likely to open up a second front in northern Israel for three reasons. First, Hezbollah is deeply involved within the Syrian conflict dedicating part of its resources to support Bashar al-Assad. Second, the political situation in Lebanon is very tense and Hezbollah’s priority is to secure its dominance as a political and military power in Lebanon. Third, Hezbollah is happy with the current military equation with Israel where it has deterred Israel from invading Lebanon by making it painful enough to prevent Israel from doing so, and it keeping itself as a defensive force and not an offensive one. All these reasons will prevent Hezbollah from entering this conflict.
While the Palestinian people in Gaza are not likely to get any outside help from their Arab neighbors or the so-called international community, they certainly have a strong Islamic sentiments backing them up within the Muslim public. The Arab regimes have stood silent against the Israeli aggression and the Western world backed Israel unequivocally. If the Arab Spring has not altered the balance of power within the Middle East up until now, its resonance will definitely shape the region for decades to come.