By Adnan Khan Last Tuesday, thousands of protesters gathered in Irbid, Jordan, as they chanted slogans against King Abdullah due to the governments decision to  increase gas prices.[1] On October 6th, 2012, yet again, thousands of protesters gathered for one of the largest rallies in Amman, Jordan.[2] Long considered to be unaffected by the Arab Spring’s uprisings, many believed Jordan had weathered the storm of popular discontent. King Abdullah’s agreement to various reforms is considered...
16th November 20125 min 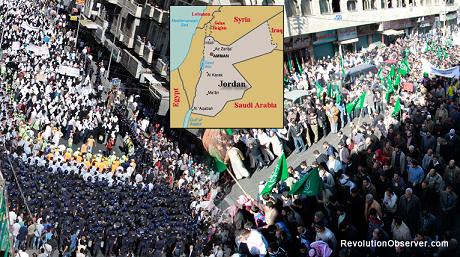 Last Tuesday, thousands of protesters gathered in Irbid, Jordan, as they chanted slogans against King Abdullah due to the governments decision to  increase gas prices.[1] On October 6th, 2012, yet again, thousands of protesters gathered for one of the largest rallies in Amman, Jordan.[2] Long considered to be unaffected by the Arab Spring’s uprisings, many believed Jordan had weathered the storm of popular discontent. King Abdullah’s agreement to various reforms is considered an example of the close relationship between the ruler and the ruled. However, this strategy of balancing various national players and constantly changing the parliament to deflect responsibility from his own failures appears to be falling apart.
The state of Jordan was and still remains an artificial construct. After the dissolution of the Ottoman Caliphate in 1924, the British Empire granted control over the newly formed states of Iraq and Transjordan to the sons of Sherif Hussein ibn Ali, Faisal and Abdullah respectively. Abdullah became the ruler over Transjordan, an entity which never existed separately under the Caliphate. Jordan was created purely to fulfil a pledge the British made in 1916 to Sherif Hussein in return for rebelling against the Ottomans and the Hashemites, thus, becoming kings over an artificial nation. Successive rulers used indigenous bedouins to balance the large Palestinian population that moved to Jordan when Israel annexed the West Bank in 1967. Playing one faction against the other has led to numerous conflicts for which the monarchy has acted the role of mediator.
The Bedouin tribal Jordanians, have traditionally been the core of the Hashemite monarchy, giving it legitimacy and power through the Hashemite domination of the security services, making them a vital source of support for the monarchy. The other important player in Jordan is the Muslim brotherhood (MB). The MB is composed mainly of Jordanian nationals with Palestinian backgrounds, a segment that makes up 60% of the country’s population.  However in the 1989 parliamentary elections, the MB won 22 of the 80 seats in the lower house, becoming the single largest bloc in Jordan’s parliament. The MB then opposed the monarchy on a number of foreign policy issues, including Jordan’s 1994 peace treaty with Israel. To contain the MB the monarchy changed the electoral law so that the newly redrawn districts made it increasingly difficult for the MB, which dominates the urban areas of Jordan, to gain large representation in parliament.
With the Arab Spring in full effect and Islamic groups coming to power in Tunisia and Egypt, the MB’s demands for change were strengthened. Coupled with this, the resentment of the Bedouin tribes towards the regime has been building since King Abdullah II’s ascension to the throne in 1999.  The position of these tribes has declined due to losses in the agricultural sector, reduced public spending, privatization of state-owned enterprises and corruption.[3] Therefore, the Bedouin’s support for the monarchy started to wane after being the king’s traditional power base for decades. This emboldened the MB and other social factions and thus protests against the monarchy grew, being were largely restricted to calls for the removal of the Prime Minister.
As a result, the king successfully contained the protests by constantly dissolving the government. King Abdullah has dismissed various governments on account of the street protests. Since Jordan’s independence in 1946, the palace has appointed more than 60 prime ministers, including three since the Arab unrest broke out in 2011. King Abdullah dissolved the government of Prime Minister Samir Rifai and replaced him with Marouf al-Bakhit, a former army general in charge of forming a new Cabinet and instituting reforms. Protests still continued, which led King Abdullah to sack Bakhit and his cabinet, naming Awn Shawkat Al-Khasawneh to head the new government and institute new reforms.
The MB, the largest faction to challenge the king, settled for reforms by the monarchy each time it was emboldened to organise large protests. The Muslim Brotherhood’s pragmatic approach in Jordan has always kept the monarchy in power. The monarchy has countered any opposition by carefully managing a balance of power strategy via playing different factions against each other. This policy has worked well for some time, however many in Jordan now see through this policy and protests are more aimed at the monarchy rather than any Prime Minister. However for the moment the MB continues to effectively prop up King Abdullah by negotiating on reforms rather than calling for an end to the monarchy.
The monarchy will continue to give concessions in order to remain in power as well as balancing the Jordanian Palestinians against the Bedouins. The MB has constantly compromised with its position and when they have the monarchy in a corner they settle for reforms which keep the monarchy’s grip on power. The MB are in a strong position to bring an end to the monarchy, which has always been the fundamental problem in Jordan. In order to achieve change, the MB are required to abandon any calls for reform that are a ploy to keep King Abdullah in power.

The Role of the New Syrian Coalition