By Abu Anas The truce reached between Hamas and Israel last week was unprecedented. With Israel backing off from an over-hyped ground invasion and negotiating an exit from the crisis with Hamas that it had initiated itself. Hillary Clinton, not expecting the Israelis to retreat, had no initial plans to join the meetings which led to the truce. Israel had to comply with Hamas’ condition for a cease fire breaking its 4-year siege on Gaza, opening...
27th November 20125 min 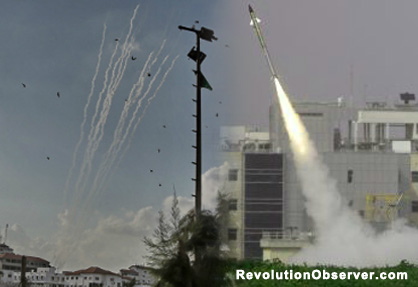 The truce reached between Hamas and Israel last week was unprecedented. With Israel backing off from an over-hyped ground invasion and negotiating an exit from the crisis with Hamas that it had initiated itself. Hillary Clinton, not expecting the Israelis to retreat, had no initial plans to join the meetings which led to the truce. Israel had to comply with Hamas’ condition for a cease fire breaking its 4-year siege on Gaza, opening the land borders and backing-off several miles from the coast off the Gaza strip. In addition, it had to promise to put a stop to its targeted assassinations of Hamas’ leadership in Gaza.[1] All of this points to a clear shift in the strategic military balance between Israel and the Middle East in general and specifically with  Hamas.

There are several reasons why Israel backed down from its invasion of Gaza. First, it was the reach and density of Hamas’ rocket attacks. For the first time ever in the history of the Palestinian-Israeli conflict, Israel’s capital Tel-Aviv and West Jerusalem were targeted by a Palestinian faction. That was accomplished using the Iranian made Fajr-5 rocket that has a range of up to 80 km.[2] Another major town hit by Hamas rockets was Dimona, the home to the Israeli nuclear facility. Major population centers were also targeted amongst them: Rishon Lezion, Ashdood and Be’er Sheva, each being home to just less than a quarter of a million people. Israel launched around 1,550 strikes at Gaza and in return Hamas shot back 1,456 rockets, a launch density unprecedented which drove hundreds of thousands into bomb shelters and threatened 45% of Israel’s population (around 3 million), according to the Israeli Defense Force (IDF).[3][4]

The third reason being the lack of reliable and useful intelligence. This reason was of paramount importance but was given very little media coverage. As always, Israel claimed that it had a large bank of targets in Gaza that it would strike. In reality, Israel proved that this bank of information was not effective, clearly seen by Israel’s bombing of civil governmental buildings which did not contain any weapon depots. In addition, Israel claimed that it had greatly depleted Hamas’ rocket arsenal, another claim proven false by the continuous rocket salvos from Gaza even until a day after the truce was signed. Hamas has ruled Gaza with an iron fist, which affected Israel’s access to human intelligence inside the strip, and in turn made Israel lacking in terms of much needed intelligence.

Fourth, Israel’s recognition of Hamas’ deterrence capability making it very costly for it to invade Gaza. Hamas was able to shoot down an Israeli fighter jet and an unmanned air vehicle (UAV) used for surveillance. Shooting down an F-16, as claimed by Hamas, would need some very advanced surface to air missiles, which if Hamas possessed would be a major advancement in their military arsenal. What makes Hamas’ claims credible is that it has already used an SA-7 shoulder fired anti-aircraft missile against an Israeli helicopter last October.[6] Additionally, Hamas succeeded in bringing down a Rafael Skylite-B surveillance UAV flying over Gaza during the conflict.[7] The greatest factor that affected the ground invasion was Hamas’ possession of the Kornet advanced anti-tank missile system, a weapon able to put Israeli advanced Merkava tanks out of action and used to great effect by Hezbollah during the 2006 war in Lebanon.[8]

Israel set itself two goals for its military operation in Gaza: the prevention of rocket attack by Hamas and the decimation of its missile arsenal. Without the truce, the rocket attacks would not have been prevented and Hamas’ arsenal was minimally affected, therefore militarily, this operation was another failure added to the IDF’s record. The standing of the Israeli unbeatable army has once again been shaken, after a great loss in Lebanon in 2006. Yesterday, Hezbollah warned Israel that thousands of missiles would hit its towns and cities reaching its southern borders, if they ever got into another war.[9] Hamas was able to set a new military reality with Israel, in the process shifting the strategic balance in the Middle East. As a consequence, this strategic shift amounts to a great opportunity for countries in the Middle East, like Egypt, to replace Israel as the real dominant player in the region.