By Adnan Khan Bashar al-Assad vowed to “live or die’ in Syria, I am Syrian, I was made in Syria, I have to live in Syria and die in Syria. I do not think the West is going [to intervene], but if they do so, nobody can tell what is next. I think the price of this invasion if it happened is going to be more than the whole world can afford.“[1] Speaking with Russia...
29th November 20125 min 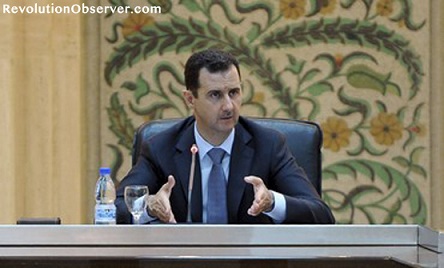 Bashar al-Assad vowed to “live or die’ in Syria, I am Syrian, I was made in Syria, I have to live in Syria and die in Syria. I do not think the West is going [to intervene], but if they do so, nobody can tell what is next. I think the price of this invasion if it happened is going to be more than the whole world can afford.“[1] Speaking with Russia Today TV earlier this month, the Syrian president made clear he had no intention of fleeing. Whilst the Syrian military has numerous shortcomings, Assad’s armed forces possess more capability than the opposition forces and this has allowed Assad to pursue a four pronged strategy of crushing the uprising.
Air raids and long range artillery bombardment has been a consistent feature of al-Assad’s strategy to subdue the masses. Daraa in March 2011 was the first town to have faced al-Assad’s strategy of crushing the people with overwhelming force. Snipers took up positions on rooftops, water supplies were cut, as well as telephone lines, the town was completely cut off from the rest of the country as artillery rained upon the town. The use of Soviet era aircraft is part of Assad’s psychological war. Residents have confirmed “pilots employ psychological tactics. Jets frequently swoop down in mock strafing raids, break the sound barrier over urban centers, or fly menacingly at high altitudes, a sign of a possible bombing raid. Low flying helicopter gunships also spray streets with machine-gun fire, and residents lose sleep over air activity at night that frays the nerves of civilians and rebels alike.”[2] This strategy softens the rebels’ defenses ahead of the next phase which is conducting a wide scale siege.
The siege of Homs which began in May 2011 and lasted for over 8 months saw the indiscriminate slaughter of anyone who stood in the face of Assad’s army units. The Syrian Army began by launching an offensive against the district of Baba Amr, even though Baba Amr had no heavy weapons. A large scale siege was conducted, the entire Baba Amr district was shelled, after all supply routes were blocked. Following this, tanks rolled into several districts of Homs and started a manhunt for all known opposition supporters. The night before the start of the operation, the military cut electricity to the city. In October 2012, Homs experienced its third army offensive and probably its worst bombardment in months when warplanes, tanks and artillery fired missiles and mortars at rebel controlled neighborhoods.[3] Throughout these attacks the opposition has remained entrenched in their defensive positions.
The use of mercenaries in the crackdown has also been another feature of al-Assad’s strategy for survival. The Shabiha have been carrying out a campaign of intimidation by killing and beating people who attend demonstrations, they have also been carrying out executions, drive-by shootings and sectarian attacks. As the Syrian army is composed mainly of sunni’s, Assad has been forced to rely on just a handful of trusted units – the 4th Armoured Division, the Republican Guard and 14th Special Forces. As a result, militia groups have been used consistently embedded with the army to lay siege on towns. One Shabiha member highlighted his role: “The government gave me 30,000 Syrian pounds per month and an extra 10,000 per person that I captured or killed. I raped one girl, and my commander raped many times. It was normal.“[4]
Bashar al-Assad’s forces are now faced by a countrywide uprising, with opposition pockets forming in most the countries’ key governorates. As the regime is only using a fraction of its forces and given its finite resources, the regime has prioritized its operations. The military continues to go on offensives aimed at destroying opposition pockets in critical areas. This has led to large swaths of the countryside effectively being ceded to the people as the regime’s forces focus on amassing enough firepower to maintain control over critical cities and supply lines. Each time the regime besieges a town, it is to the detriment of regime positions in other areas. As a result, the regime has come to disengage from direct confrontation in most areas it is facing an uprising. Whilst fighting continues in many areas of the country, Aleppo and Damascus are dominating the regime’s resources in terms of direct confrontation. The regime cannot sustain supply lines or losses in direct engagement in most of the country and more.
It is nearly two years since the people of Syria rose up against the regime of Bashar al-Assad. The regime initially used its notorious secret service to quell the uprising, but the regime then turned to its military as the uprising spread to the whole country. The military has employed all of its military might against both civilian and opposition forces in the hope of halting the uprising. In the face of defections and divisions amongst segments of Alawites, Bashar al-Assad’s grip on power is loosening.