By Abu Anas The Syrian revolution has now lasted 20 months with over 40,000 killed.[1] The rebels fighting Bashar al-Assad number between 70,000 and 100,000.[2] There are several problems facing the rebels, which inhibit their ability to quickly overpower the current regime. Even though the regime’s army has dwindled drastically over the past 2 years, it is still very capable, having a large arsenal of deadly weapons at its disposal. Also, it owns the airspace,...
4th December 20127 min 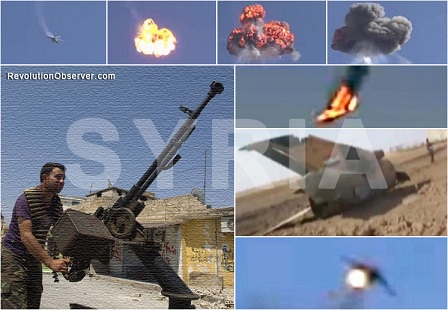 The Syrian revolution has now lasted 20 months with over 40,000 killed.[1] The rebels fighting Bashar al-Assad number between 70,000 and 100,000.[2] There are several problems facing the rebels, which inhibit their ability to quickly overpower the current regime. Even though the regime’s army has dwindled drastically over the past 2 years, it is still very capable, having a large arsenal of deadly weapons at its disposal. Also, it owns the airspace, utilizing its air-force to strike at the rebels from the skies. In the face of these challenges, the rebels have been following a specific military strategy to overcome their own limitations and the regime’s strengths.
Due to its limited army personnel, the Assad regime had to make the hard choice of retreating from the countryside and only holding the main cities of each province. The rebels used that weakness and launched continuous campaigns on smaller towns until they have carved up a large liberated region on the outskirts of the main cities. The aim was to achieve a safe-haven where they can organize and train and therefore have a launching point for a future offensive. In the Northern provinces of Aleppo, Idlib, al-Raqqah and al-Hasakah, the rebels swept across from the Turkish border down towards the major cities. In Idlib, another offensive came from the southern part of the province in Jabil az-Zawiya, where the rebels had a stronghold since the beginning of the revolution. After destroying the 35th Regiment south of Idlib, they marched into Latakia, which have set pressure on al-Qardaha, al-Assad’s hometown and the center of gravity for the ruling Alawite regime. Once the rebels have consolidated their safe-haven in the north, they will launch an all-out attack southward towards Homs to free it from the siege continuing forward to Damascus.
After the tactical error in facing off with the regime’s forces head-on at Baba Amr in Homs during February of this year, the rebels resorted to an approach more suitable to their capacity; guerrilla tactics of hit-and-run. The goal was to strike at the weak points of the regimes military infrastructure through ambushes until it drains the regime’s resources. The rebels wanted to disrupt the supply lines of the Assad forces, especially to the main city of Aleppo, in northern Syria. There are 2 main highways that reach Aleppo: the M5 from Damascus and the M4 from the east coast of Latakia. The rebels concentrated on 3 main cities to isolate it: Saraqeb which lies on the intersection of both highways, Ma’arat an-Numan southwards on the M5 and Ariha westwards on the M4.[3] After cutting off the supply lines, the rebels encircle the main cities and slowly eliminate Assad’s hold on them.
The international community denied the rebels any anti-aircraft weapons to counter the destructive power of Assad’s air-force, as such the rebels resorted to a different tactic that would mitigate this danger. Since the rebels couldn’t attack Assad’s jets while in the air, they planned to attack the planes while they are parked on their runways. They infiltrated military airports and bombarded others destroying large numbers of helicopters and fighter crafts. In Idlib, rebels bombarded the Taftanaz airport and held siege for days around the Abu Dhuhur airport.[4][5] In Dier ez-Zour, the rebels attacked the Hamdan airport and similarly Aleppo’s International Airport.[6][7] Most recently in its latest achievement, the rebels in Damascus destroyed the strategic Marj as-Sultan helicopter military airbase.[8] Using this tactic, the rebels have put a strain on Assad’s air force and sabotaged lots of his air facilities which was his biggest advantage.
Through the sustained arming by Iran via Iraqi airspace, the regime had stocked up on a lot of weapons and ammunition. Since outside support was insufficient for the rebels, they had to target military bases to capture weapon and ammunition depots so they could sustain in battle. By doing so the rebels have been able to capture a large amount of rifles, ammunition, rocket-propelled grenades (RPG-7) and other light weaponry. In many cases, they have been able to capture T-55/62/72 tanks and other armored vehicles. They also captured needed heavy machine guns like the KPV-14.5mm and the ZU-23mm anti-aircraft auto-cannon. The greatest gain came from besieged air-defense military battalions where the rebels have captured the much needed shoulder held surface-to-air missiles (MANPADS) of the advanced Igla-1 & S (SA-16/24) which has the capability to shoot down regime’s fighter jets.[9]
The last piece of the rebel’s strategy is Damascus, the center and stronghold of the regime, which Assad has fortified and contains the elite military unit, the Republican Guard. The rebels decided to execute surgical strikes at the heads of the security and military pyramid to paralyze the regime. Last July, the rebels have succeeded in assassinating several top regime officials inside the national security building in Damascus.[10] In a recent offensive, the rebels have been able to down a fighter jet and helicopters in Damascus and cutting off the main road to Damascus International Airport.[11] The many rebel battalions in Damascus and its countryside have merged under a single leadership called Ansar al-Islam Assembly which has thousands of fighters situated within the Ghouta area south and east of Damascus. As a result, the rebels neutralized Assad’s advantages, made continuous progress shifting the balance on the battlefield and set themselves up for an all-out attack on Damascus.
[1] http://www.google.com/hostednews/afp/article/ALeqM5i9rOuTnfmcFfdZJmnIB1nsu28n3g?docId=CNG.08f465f0502f24565a5e31b0b7b8211b.91
[2] http://www.hurriyetdailynews.com/syrian-rebels-too-fragmented-unruly.aspx?pageID=238&nID=29158&NewsCatID=352
[3] http://www.reuters.com/article/2012/11/02/us-syria-crisis-idUSBRE88J0X720121102
[4] http://www.france24.com/en/20120901-syria-rebels-fsa-target-bashar-al-assad-air-force-conflict-unrest-deir-al-zor-turkey-un
[5] http://www.nytimes.com/2012/09/27/world/middleeast/rebels-make-gains-in-blunting-syrian-air-attacks.html
[6] http://www.guardian.co.uk/world/2012/nov/17/syrian-rebels-capture-military-airport
[7] http://www.nytimes.com/2012/08/18/world/middleeast/Syria.html
[8] http://www.nytimes.com/2012/11/26/world/middleeast/syrian-rebels-said-to-have-seized-military-airport.html
[9] http://www.cnn.com/2012/11/29/world/meast/syria-missiles/
[10] http://www.cnn.com/2012/07/18/world/meast/syria-unrest/index.html
[11] http://www.csmonitor.com/World/Middle-East/2012/1129/Syrian-rebels-cut-off-Damascus-airport-in-critical-step-video
* Image: By Vitaly V. Kuzmin (http://vitalykuzmin.net/?q=node/314) [CC-BY-SA-3.0 (http://creativecommons.org/licenses/by-sa/3.0), via Wikimedia Commons
previous