By Adnan Khan On Monday October 9th, the US Department of Defense confirmed that a team of US military planners were in Jordan in order to deal with Syria’s chemical weapons. The team, led by special operations forces and comprising about 150 troops, mainly from the US army, is constructing a headquarters building in Amman from which operational planning and intelligence gathering will take place. “We have been working with Jordan for a period of...
18th October 20125 min 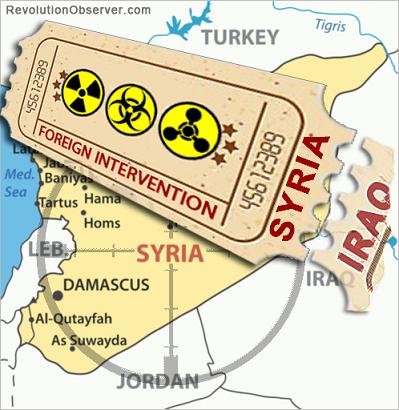 By Adnan Khan
On Monday October 9th, the US Department of Defense confirmed that a team of US military planners were in Jordan in order to deal with Syria’s chemical weapons. The team, led by special operations forces and comprising about 150 troops, mainly from the US army, is constructing a headquarters building in Amman from which operational planning and intelligence gathering will take place. “We have been working with Jordan for a period of time now … on a number of the issues that have developed as a result of what’s happened in Syria,” US Defense Secretary Leon Panetta told a news conference in Brussels. Panetta said those issues included monitoring chemical weapons sites “to determine how best to respond to any concerns in that area.“[1]
Syria is not a signatory to either the Chemical Weapons Convention (CWC) or the Comprehensive Nuclear Test Ban Treaty (CTBT). As a result, Syria began developing chemical weapons in the 1970’s and made serious efforts to acquire and maintain an arsenal of such weapons. Its Foreign Ministry spokesman, Jihad Makdissi, at a news conference shown live on Syrian national television on July 2012, confirmed Syria’s possession of chemical weapons, saying: “These weapons are made to be used strictly and only in the event of external aggression against the Syrian Arab Republic, any such weapons were carefully monitored by the Syrian Army.”[2]
Syria reportedly manufactures Sarin, Tabun, VX, and mustard gas types of chemical weapons. Western non-proliferation experts have identified 5 production and storage facilities at Cerin, Hama, Homs, Latakia and Palmyra and one suspected weapons base at Al Safir.[3] Independent assessments indicate that Syrian production is a mere few hundred tons of chemical agent per year and its stockpiles prior to international export controls have likely long been exhausted.[4] This is due to Syria’s inability to internally produce many of the necessary precursors to create chemical weapons and its dependence upon importing them; a fact that was documented by the CIA and seen in declassified acquisition report to US Congress. As military commanders learned during World War I and the Iran-Iraq war, chemical agents are volatile, quick to vaporize, and tend to dissipate quickly. Therefore, it will be challenging for the regime to amass enough quantities of chemical agents to cause significant damage in a real-world setting.
Chemical weapons could be deployed using a delivery system such as a missile after being integrated with a chemical warhead. One such option for the Syrian regime is Russian-imported SCUD missiles that are a series of tactical ballistic missiles developed by the Soviet Union during the Cold War.[5] For carrying out tactical military operations, SCUD missiles are an ineffective tool. The SCUD missiles shot into Israel from Iraq in 1991 did not hit any significant military, government, or infrastructure targets. They are suited for larger targets such as bases, airports, industrial sites etc. Using such chemical weapons will only be useful if there are silos’ or heavy machinery to target in fixed areas, which is not the case of the rebels in Syria. Additionally, it is questionable if the regime has the technical know-how to do that. In July 2007, a Syrian arms depot exploded, killing at least 15 Syrians. Jane’s Defence Weekly magazine believed that the explosion happened when the Iranians and Syrian military personnel attempted to fit a SCUD missile with a mustard gas warhead.[6]
The nature of the uprising in Syria is that it is taking place all over the country. The Free Syrian Army (FSA) does not have fixed positions and a stock of weapons. Using artillery to disperse chemical agents would, also, have little impact as the FSA units are dispersed around the country. Al-Assad is fighting an unconventional, rather than conventional, force that uses asymmetric tactics, which is hard to target through a missile or the use of unconventional weapons without self-annihilation. In Syria there are too many FSA units to target and SCUD’s are notoriously inaccurate. The FSA does not need to match the regime’s forces’ numbers or firepower because they can compel the regime to fight everywhere at once, taking advantage of their superior mobility and flexibility to mount effective raids and ambushes where and when it suits them.
Chemical weapons are a weapon of mass fear rather than mass destruction. America’s attempt to use Syria’s chemical weapons as a propaganda tool, shows that in reality if the rebels are on the verge of overthrowing the al-Assad regime the US will use this pretext to intervene. It should be remembered the invasion of Iraq was almost entirely justified on the pretext Saddam Hussein possessed weapons of mass destruction (WMD’s). This would explain the military buildup on the Jordanian side to Syria and Turkey’s readiness on its northern border. With the battle raging on in Syria between al-Assad and the FSA, chemical weapons will do little to alter the facts on the ground, but will be used as an excuse for the US to militarily intervene if needed.