A ceasefire deal brokered by everyone apart from Hamas and the Israeli authorities on 20th May 2021 has already led to the criticism of the Israeli war in Gaza.[1] Leaks are already emerging of the Israeli Air Force failing to destroy Hamas’ network of defensive tunnels, and Israeli defences struggling with Hamas rocket attacks.[2] The resistance in Palestine caused serious concern for Israel despite the Zionist’s one-sided, asymmetric war on civilians.

Matters in Palestine escalated after Zionist settlers once again began evicting Palestinian residents, this time in Sheikh Jarrah. The area is named after the personal physician to Salahuddin, the Muslim conqueror who retook and liberated Jerusalem from the Crusaders in 1187. After the 1967 war, Zionists captured more land from the Old City, East Jerusalem, and the neighbouring West Bank. The infringement into Sheikh Jarrah is part of Israel’s plan to seize all of Jerusalem. This latest chapter of ethnic cleansing was followed by Israeli forces storming one of the holiest mosques for Muslims during their holiest night – leaving hundreds injured with many permanently blinded by rubber bullets and explosives.

The incessant attacks led to retaliation from Gaza – rocket attacks into Israel. Mostly made from scavenged parts that wouldn’t be out of place at a plumber’s shop, Palestinians used all their know-how to fight with the most meagre of means. Hamas also recovered dozens of Israeli missiles that had not detonated in previous strikes on Gaza and attempted to reverse engineer them! For Palestinians, the rockets symbolise their resistance to Israeli dominance and occupation. However, the latest fire has surprised Israeli authorities.

Israeli intelligence has estimated that Hamas, Islamic Jihad and other Palestinian resistance groups have about 30,000 rockets and mortar projectiles stashed in Gaza. While the rockets are of widely varying ranges and lack guidance systems, the militants have been able to improve their accuracy. 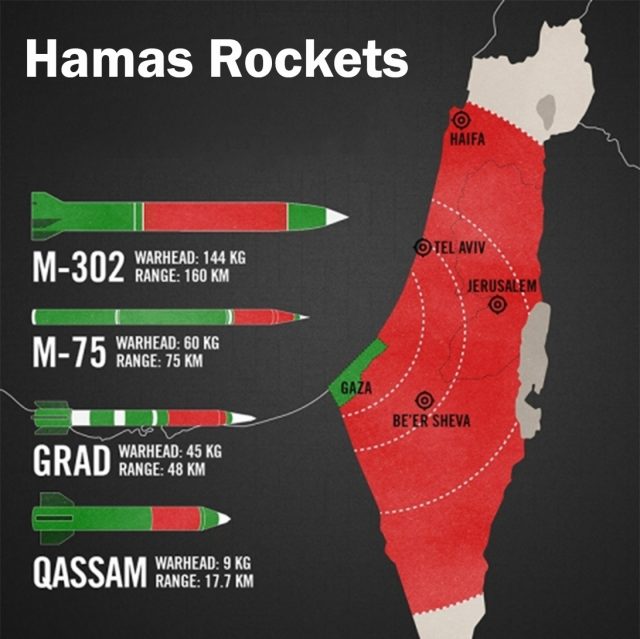 equency and range of attacks from Gaza in the latest episode of Israeli aggression is also unprecedented. While most rocket attacks have aimed at southern and central Israel, longer range rockets have managed to reach further north. Hamas has not only managed to replenish its stock but to improve its capabilities.

The short-range rockets, known as Qassams (named after Hamas’ military wing) have a range of roughly six miles, these are produced easily and cheaply. The medium range rockets are based on Iranian and Russian design, capable of reaching targets up to 15 miles in Tel Aviv.

The longest-range rockets can travel much farther and can hit Tel Aviv, Jerusalem and Ben-Gurion Airport. They include the M-75, a locally made rocket with technology supplied by Iran, and the J-80, a locally made rocket named after a famous Hamas military commander, Ahmed al-Jabari, killed by an Israeli airstrike in 2012. On 20th May 2021, Hamas claimed in a statement that it has a missile with a range of 250 km, about 155 miles, that can hit anywhere in Israel, but that’s not all.

An analysis by Michael Armstrong, an associate professor of operations research at Brock University in Canada, found a significant increase in the rate of fire. Using numbers from the Israel Defense Forces (IDF), prof. Armstrong, who studies these weapons, cited 470 rockets fired from Gaza during the first 24 hours of the most recent escalation compared to a peak of 192 rockets per day in 2014 and 312 in 2012. [3]

Hamas, he says, also launched more long-range attacks with 130 rockets fired at Tel Aviv in one evening alone, representing close to 17 percent of all fired rockets until that point. In 2014 that rate was at eight percent and in 2012 at less than one percent. [3]

How does Israel try to prevent retaliatory attacks?

Considered among the most advanced defence systems in the word, Israel’s ‘Iron Dome’ system uses radar to identify and destroy incoming threats before they can cause damage. The all-weather system was specially designed to help combat shorter-range rudimentary weapons like the rockets fired from Gaza. But some analysts say the intensity of recent barrages from Gaza suggests militant groups are attempting to overwhelm the Iron Dome – raising concerns about the system’s possible limitations.

The Israeli military says its missiles intercept more than 90% of the rockets targeted. But the Iron Dome doesn’t chase down every rocket. In fact, according to official IDF data, the system has destroyed fewer than half the rockets and mortars fired by Hamas and Islamic Jihad. The Israeli Air Force said that approximately 3,100 rockets had been fired from Gaza since the start of the latest conflict, just over a week ago. About 450 had fallen short and failed to penetrate Israel. Of the remaining 2,650, about 1,210 had been intercepted. Why?

Firstly because the system “decides” which rockets to intercept and prioritise. Those aimed towards more densely populated areas and critical infrastructure are to be intercepted first while learning to ignore rockets with trajectories directed towards the sea or uninhabited regions. The IDF assesses that there were 13,000 to 14,000 rockets in Gaza before this escalation began – intercepting every rocket is simply unsustainable. Each missile costs about $40,000, so intercepting 1,200 incoming rockets is a very expensive proposition.

Secondly, and more alarmingly for Israel, it is because the Palestinian resistance now know that the intensity of the barrages — and the multiple directions from which they launch — have exposed vulnerabilities in the Israeli defense and can overwhelm the system. Militant fire has been responsible for at least 12 deaths inside Israel.

While the impact of these rockets are not significant, relative to the damage incurred by Palestinians, they are nevertheless a weapon of mass disruption. Having rockets rain down from the skies can elicit a feeling of being beseiged due to Israels small geography which, considering Tel Aviv hopes for business as usual for Israelis even when it ramps up its operations against Palestinains, is a major victory for Palestinian resistance. Israel has spent decades carefully crafting a mythical image of invincibility with its state of the art defence system coupled with propaganda efforts; penetrating the system with crude rockets is a damning blow for this image, regardless of the subsequent damage.

A Chink in the Armour

Israeli military analysts still regard the system as a great success in protecting civilians, but they see the Iron Dome as just one component of a broader military strategy. “The IDF does not believe in the possibility of achieving victory in a war, campaign or a limited conflict through the defense,” wrote IDF Dado Center researchers in 2015. “A victory always entails an offensive.” [4]

While rocket attacks may now make Israel rethink its current attacks as the Palestinian resistance continues to improve their ability to disrupt Israeli life, it is not enough to resolve their underlying grievances of occupation, ethnic cleansing and colonisation. Rather, the resistance efforts with its basic means have exposed a chink in the armour: Israel’s enemies outside of the occupied territories and state actors will have taken notice.

1 Behind the Gaza cease-fire: Netanyahu surrendered to Biden, and dumped the blame on the army – Israel News – Haaretz.com

Is the Two-State Solution Dead?