The neighbourhood at the centre of the crisis – Sheikh Jarrah, is named after Sheikh Hussam al-Din al-Jarrah, who was the physician of Salahuddin

Israeli officials were forced to close the country’s main international airport on 11th May 2021 as rockets began striking Tel Aviv.[1] The Israeli regime responded with airstrikes and is warning of a full-scale war. This is a major escalation in the recent uptick in violence as Zionist police stormed one of Islam’s holiest sites – the al-Aqsa mosque, during the holy month of Ramadan and as Zionist settlers forcefully evicted residents in East Jerusalem. Whilst much of the global media have only begun covering the issue when rocket strikes started, at the heart the issue remains the broader question of apartheid and Zionist settlers looking to increase their stranglehold over the territory from the indigenous people.

At the heart of the current crisis is the neighbourhood of Sheikh Jarrah in East Jerusalem.

Since 2009 Zionist settler organisations have been working on their stated aim of evicting and expelling all Palestinians from Sheikh Jarrah. The neighbourhood has seen settlers storm homes and expel the residents and then take the properties for themselves, all part of their stated settler agenda.  This has been the consistent policy of this Zionist regime across occupied Palestine and has seen her back settler groups in stealing land from Palestinians who have been living in places such as Sheikh Jarrah for decades. Palestinians have no rights according to Israeli judicial system. Under international law Sheikh Jarrah and East Jerusalem belongs to the Palestinian territories. But Israel has continued to illegally occupy it since the 1967 war. Israel has a grand settlement strategy termed the ‘Holy Basin’, which is a set of settler units and a string of parks themed after Biblical places and figures around the Old City of Jerusalem. The plan requires the expulsion of Palestinian families in the area. 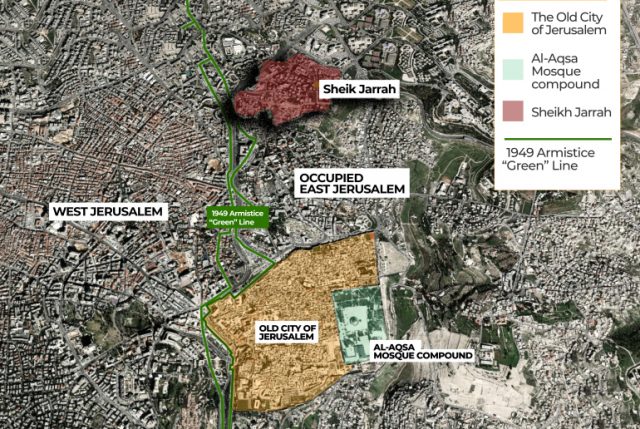 Like many residents in occupied Palestine, Sheikh Jarrah residents resorted to the legal system for protection but Israeli courts have consistently upheld the view of Zionist supremacy and not questioned settlement claims. Many families across Palestine who have been victims to such settler claims have attempted to follow the legal system, but on all occasions hit a brick wall. They submitted appeals to the supreme court against the forced evictions. But the supreme court has a track record of supporting Zionist settlers. Zionist settlers have already stolen homes in Sheikh Jarrah amongst others areas despite the recent delay in a court ruling against six families who were to be evicted in May 2020.[2]

With an effective apartheid system in place the residents of Sheikh Jarrah resorted to peaceful protests with many people joining them in support of the families that were to be evicted. These were non-violent protests that consisted of chants and as it was the month of Ramadan protestors broke their fasts together and prayed together. Zionist settlers seeing the sight of hundreds of protesters outside their recently stolen properties turned to the Israeli police to protect their claims and this saw the police deployed in military grade armour and equipment for the safety of the Zionist settlers. But then the police began spraying Skunk water on the protestors, which is a chemically enhanced sewage water.[3] Videos have been posted all over social media of the police using violence on random civilians and breaking into homes in Sheikh Jarrah and arresting people.

Al-Aqsa is one of the holiest sites for Muslims, it is literally blessed in the Qur’an. Al-Aqsa is however in reality a compound that consists of large open spaces with multiple prayer areas. The entire compound is considered Al-Aqsa and is located in the Old City of Jerusalem and is an enclosed city with a few gates of entry and consists of housing, markets and religious spaces. Jerusalem consists of four quarters – Christian, Armenian, Jewish and Muslim quarters in East Jerusalem and with al-Aqsa in the Muslim quarter. 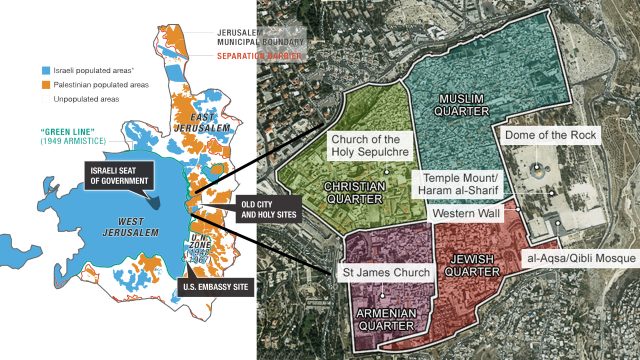 According to international law Jerusalem is meant to be split into East and West Jerusalem, with Jews with West and Muslims with East of Jerusalem, with Palestinians controlling al-Aqsa. But from 1967 Israel took over both East and West Jerusalem, including al-Aqsa and the neighbourhoods around the compound including Sheikh Jarrah which is to the north of Jerusalem. Since occupying Jerusalem anyone wanting to visit al-Aqsa in East Jerusalem is required to apply for a special permit from Israeli authorities who usually reject these applications. Christians also do not have open access to their quarter in Jerusalem. As the decades have passed Israel has increased its control over Jerusalem with an iron grip.

Every Ramadan al-Aqsa is packed and even more so in the last 10 days of Ramadan when worshippers turn out in numbers to Islam’s holy site. But this year the Israeli police barged their way into al-Aqsa when worshippers were praying with heavy weapons and full armoured gear. They then proceeded in using stun grenades and started shooting rubberised steel bullets. Video on social media shows defenceless worshippers who were in the middle of their prayers running for cover. Further videos show Israeli police breaking into the mosques, breaking glass and using stun grenades inside the mosque. They even forced the doors shut so no one could escape. This caused countless injuries with some deaths. In one case a civilian received eye injuries, and then Israel proceeded to attack the medical tent. These attacks that began on Friday 7th May continued with grenades being thrown in market places as many went about their daily business.

Sheikh Jarrah like much of historic Palestine is occupied territory and Israel is forcing the Palestinians to leave so Zionist settlers can move in. This was why protests have swelled to defend Sheikh Jarrah and to protect people who are going to be expelled from their homes. It was here the Zionist regime responded as its always done by attacking al-Aqsa. Al Aqsa was attacked by Zionist police due to the protests taking place in Sheikh Jarrah.

Protests which were just in Sheikh Jarrah have now swelled to all over the occupied territories. Israel may have bitten more than it can chew by escalating matters during the month of Ramadan

Biting More Than You Can Chew

Palestinians are not allowed to visit al-Aqsa without a permit from Israel. But with the attack on al-Aqsa Muslims from all over the West-Bank headed towards al-Aqsa. This caused huge traffic jams on highways and streets as many made their way to al-Aqsa in order to defend it. To stop protesters reaching al-Aqsa, Israel blocked the highways that they come from in order to prevent buses and coaches reaching the holy site. Protesters responded by abandoning their transport and marched on foot towards al-Aqsa causing a huge influx of people travelling along highways and overwhelming Israeli checkpoints. Protests which were just in Sheikh Jarrah have now swelled to all over the occupied territories. Israel may have bitten more than it can chew by escalating matters during the month of Ramadan. This has led to the regime having to declare a state of emergency in the central city of Lod after Zionist forces were overwhelmed.[4] Lod Mayor Yair Revivo is quoted as saying: “All of Israel should know, this is a complete loss of control. Civil war has erupted in Lod.” He compared the situation to the Nazis’ 1938 Kristallnacht pogrom.[5]

Much of the global media only began giving coverage to this issue when the Zionist entity came under attack. This is no conflict or clash with asymmetry of powers. Palestinian weapon of choice against a fully militarised police force are rocks against occupation, apartheid and with Zionists trying to expel them. It’s likely things will escalate as the underlying issues of apartheid, colonisation and oppression are not being addressed by the Zionist entity and its supporters in the international community. Beyond Palestine, opinion is growing against the surrounding Muslim rulers and militaries to intervene on behalf of the Muslims. These rulers are stuck between pleasing the West and maintaining normalisation with the Zionist entity when the people they are meant to represent want to see action. The actions of the Zionist entity are potentially creating even bigger problems. What began in a small neighbourhood near Jerusalem has escalated into a major crisis.

[5] ‘Kristallnacht in Lod’: State of emergency as Arab mobs set synagogues on fire | The Times of Israel