Whilst the world’s largest trading bloc is being touted as a China-backed alternative to the US global order, on closer examination the deal falls short of this perception

On Sunday 15th November 2020, 15 nations in the Far East signed the Regional Comprehensive Economic Partnership (RECP), forming the world’s largest trading bloc. After a decade of talks and negotiations the Association of Southeast Asian Nations (ASEAN) along with Australia and New Zealand as well as South Korea and Japan all penned the deal. The deal is regarded as a China-backed alternative to the US led world order and sees the US excluded from the emerging regional economic architecture. However, upon closer examination of the trade deal it falls short of the perception of shifting the strategic balance of power in the Asia Pacific. 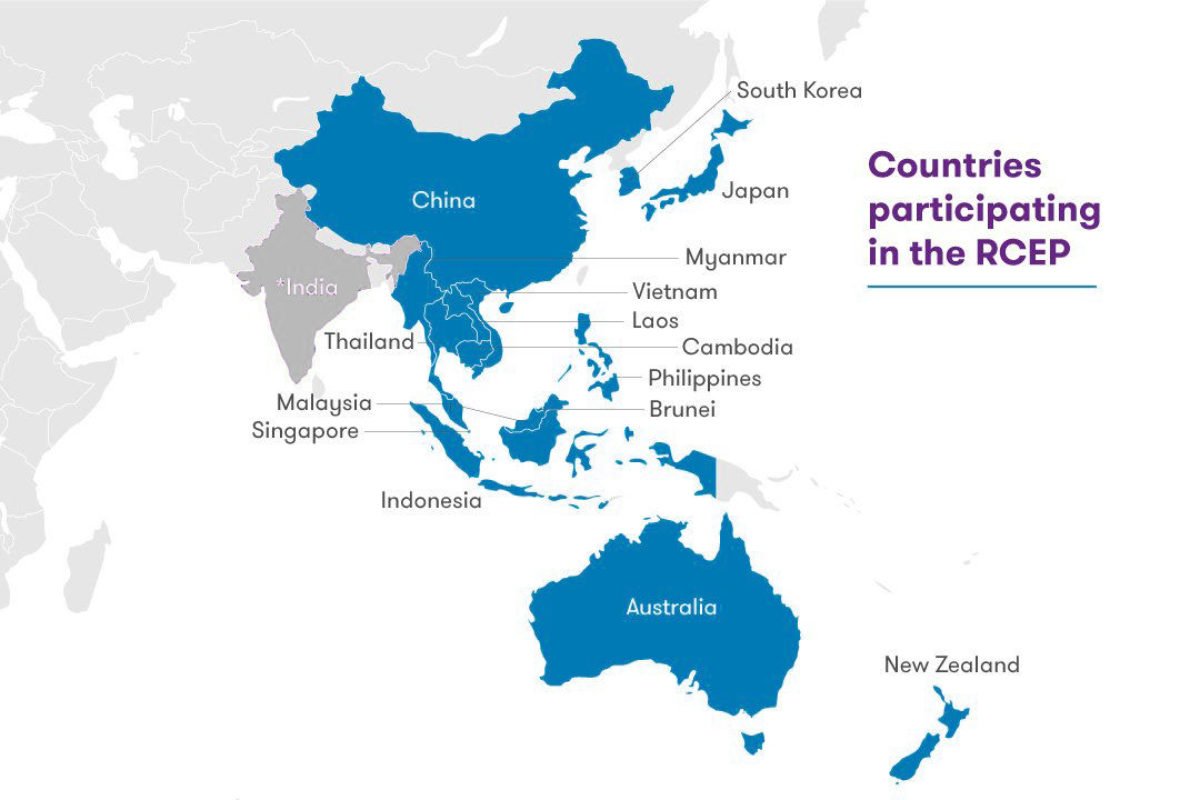 East and South-East Asia has for long been a key economic engine for the global economy. Japan and the Tiger economies throughout the 1970s and 1980s were the hub for cheap manufacturing for the world’s appetite for consumer goods. From the beginning of the 21st century China emerged not just the region’s manufacturing hub but the world’s supplier of manufactured consumer goods. The RCEP deal took place with two Asia’s in the region: with the more developed north and east Asia that consists of China, Japan, South Korea and Taiwan and everything south of China who are developing nations. The economic architecture in the region consists of numerous production sharing networks. These networks include affiliated and unaffiliated companies that sell parts and components from multiple destinations for assembly in different destinations and then for sale globally. Estimates of network trade—defined as parts, components, and final assembly within production networks—finds that 64% of all ASEAN exports to China were parts and components, as were 40% of ASEAN imports from China.[1] As a result, the trade in Asia-Pacific and Southeast Asia is weighed heavily towards imports and exports of manufactured items rather than raw materials.

The agreement concluded between China, the ten ASEAN member states, Australia, New Zealand, Japan and South Korea, is almost unrivalled in its complexity. Its 510 pages, 20 chapters plus 17 annexes and 54 schedules of commitments cover market access, rules and disciplines and economic and technical cooperation between what are 15 very different trading nations. The agreement pulls together a pan-Asian basic standard for trade that goes beyond the terms provided by the World Trade Organization (WTO). The deal will combine all the region’s economic power into a single regional trade network. It combines ASEAN with the other key economies in the region into a single treaty and it draws north and Southeast Asia together in terms of trade interactions and supply chains. It also sets out a single set of rules covering all 15 markets. Notably, RCEP marks the first time China, Japan and South Korea have been brought together under a single trade agreement – a process that has been otherwise marred by historical and diplomatic disputes.

There are however, a number of issues that weaken the trade deal. India’s withdrawal from the deal, even though it was involved in early discussions, opted out in 2019 over concerns related to cheap Chinese imports. The extension of RCEP to South Asia and one of the largest growing economies in the world would have made the trade bloc a colossus. The RCEP is focussed on reducing tariffs and creating single rules for all its participants. It did not write the rules for services, intellectual property or investment, all key issues going forward. It is a weaker deal than the Comprehensive and Progressive Agreement for Trans-Pacific Partnership (CPTPP) and will allow members to maintain their own subsidies. As many of the RCEP signatories already have bilateral trade pacts with each other, there is little in the way of immediate tariff reduction in the pact’s 510-page document. Indeed, the average tariff of ASEAN countries on imports from RCEP partners had already dropped from 4.9% in 2005 to 1.8% currently.

The region fundamentally produces low-end goods and niche high-tech goods which are consumed in European and the North American markets. This trade deal has done little to alter this economic dynamic and as a result despite the headlines about how RCEP is a “China-led alternative” to the US world order this remains more perception rather than reality

Despite this the RCEP pact is seen as a major victory for China and many see it as the beginning of a shift in the balance of power. The idea of RCEP, hatched in 2012, was seen as a way for China, the region’s biggest importer and exporter, to counter growing US influence in the Asia-Pacific. It gained momentum when US President Donald Trump withdrew the US from the Trans-Pacific Partnership (TPP) in 2017. The signing of the RCEP deal was described by Chinese Premier Li Keqiang as “a victory of multilateralism and free trade. The signing of the RCEP is not only a landmark achievement of East Asian regional cooperation, but also a victory of multilateralism and free trade.”[2] For China the RCEP deal signifies that it can be a partner in multilateral agreements – especially when the US has been leaving many multilateral agreements. Chinese officials have been pushing this aspect since it aids Chinese soft power projection. The fact Chinese officials have not been promoting the economic aspect of the deal is very telling, this is because the deal will do little to alter trade patterns as the region is already the main market for all the nations concerned and China will not become the centre of the region due to RCEP, as it already is the centre of the region. RCEP serves China’s agenda of creating the perception that it has orchestrated a multilateral deal.

The signing of RCEP marks the second mammoth trade deal that excludes the US, after President Donald Trump pulled the country out of the CPTPP in 2017. With the new administration moving into the White House in January 2021, the opportunity for the US to re-engage with regional trade will remain open; the CPTPP (the TPP’s successor) was designed to make it as easy as possible for the US to re-join if and when domestic politics made it feasible.

The RCEP members already account for 29% of global economic output and 30% of global trade. This trade deal has made it easier and much smoother for its members to continue with their trade relations. Foreign Direct Investment (FDI), services and intellectual property is notably absent and will likely weaken the bloc as these are the areas of dispute that will arise. The region fundamentally produces low-end goods and niche high-tech goods which are consumed in European and the North American markets. This trade deal has done little to alter this economic dynamic and as a result despite the headlines about how RCEP is a “China-led alternative” to the US world order this remains more perception rather than reality.

Searching for Normalisation in Africa

The Battle for Taiwan