By Adnan Khan On the 100 year anniversary of the Sykes-Picot treaty and the 5th anniversary of the uprising in Syria US secretary of State, John Kerry confirmed the US agenda for Syria. The US secretary told the Senate Foreign Relations Committee that he will move towards a plan B that could involve a partition of Syria if a planned ceasefire did not materialise, or if a genuine shift to a transitional government does not...
1st March 20165 min 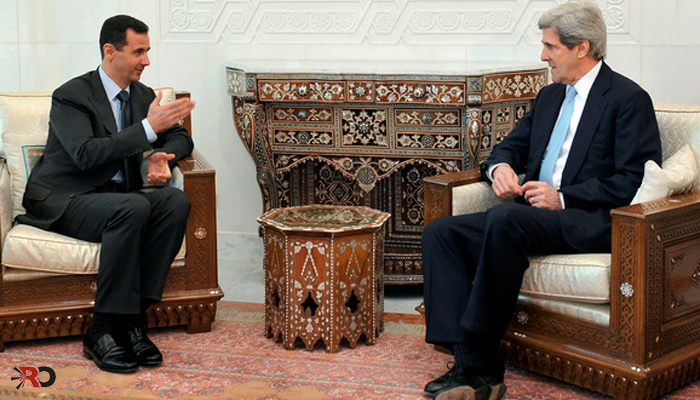 The ceasefire the US has been long pursuing is based upon the Vienna conference agreement in December 2015, which itself is based upon the on-going Geneva conferences, which have been on-going for years. At the heart of all the summits and negotiations is the opposition negotiating with the al-Assad regime and the formation of a transitional government. The invi­ta­tions that are sent out for such con­fer­ences have always been lim­ited and tar­geted to a select few oppo­si­tion groups who support this agenda. The inclu­sion of ex-regime mem­bers and the exclu­sion of influ­en­tial groups demand­ing a change in regime demon­strates the Geneva talks are to pre­serve the al-Assad regime and those opposed to this agenda are labelled as terrorists. The current ceasefire and the potential failure are not contradictory but aimed at preserving the US position, which is to preserve the regime in Damascus. This was highlighted by al Jazeera: “At the start of the con­flict, the US pub­licly stood against (Syr­ian Pres­i­dent) Bashar al-Assad.

But at the same time they kept mak­ing false promises to the oppo­si­tion. And now their true posi­tion is out in the open. The US is not stand­ing against Assad. They are accept­ing him on the nego­ti­at­ing table and con­sider him the leader.”[3]

Further partitioning Syria and the wider region has been a US policy for some time. Today, American officials have resurrected outdated plans to devour the Arab world once deemed too ambitious to accomplish and too dangerous to talk about in public. The term employed by successive American administrations to describe the plight of the Arab World, such as “sinking in the sand,” “arc of crisis,” “balkanization,” or “Greater Middle Eastern Initiative,” are all attempts to move away from the Sykes–Picot Agreement of 1916, which protected old Europe’s supremacy and interests, a colonial legacy which still persists today. Back in 2006 Army Lt. Col. (ret.) Ralph Peters outlined his “blood borders” in the Armed Forces Journal re-imagining the Middle Eastern and Asian borders along ethnic, sectarian and tribal lines.[4] The breakup of Syria and much of the Middle East was previously envisioned by the Bush neocons who penned A Clean Break: A New Strategy for Securing the Realm. The document called for overthrowing Saddam Hussein and dividing Syria. Using division as a means of controlling the status quo has long been part of the US agenda.

The current battle lines in Syria could potentially be the borders the US envisages. The northern areas have 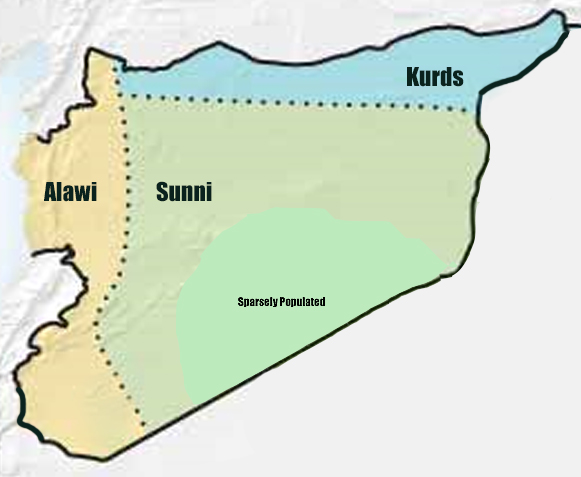 historically been predominantly Kurdish from Hasakah, to Kobani to the Turkish border. The northern region from Idlib province across the Euphrates covering al-Raqqa all the way to the Iraqi border is predominantly Sunni. The core of the country from Damascus to the Latakia province, where the regime loyalists and minority Alawis reside can become a country on its own. This new map is not very different to how Syria looked under the original French map after the Sykes-Picot agreement. The French were forced to make many adjustment to this map through the 1920’s as it attempted to divide the people in order to control the country. But whatever map John Kerry and his cronies envisage, the question is, will it be any different to the current status quo and will it survive?

Sykes-Picot has failed as it was in complete contradiction to the values and culture of the people. After 100 years, much of the Sykes-Picot constructed borders are not even recognised by the people of the region and that’s why they are failing to hold today. These borders aimed to create new groupings, which never existed previously in the hope the people would leave their Islamic unity and embrace nationalistic identities. But 100 years ago there was no such things as an Iraqi, Syrian, Jordanian or Lebanese, these nationalities were literally created out of thin air. What successive US officials and think tanks have proposed is no different, it is new broad based ethno-sectarian identities. The Kerry-Obama 21st century version of Sykes-Picot is to establish borders based on further sectarian divisions, which in all likelihood will struggle to survive as they are based upon groupings which have little influence on the region as a whole. This is why this attempt by Kerry is likely to also fail.

The announcement by John Kerry of splitting Syria, comes in the context of America’s failure to force the rebel fighters to give up their demands for real change despite numerous conferences and summits to achieve this. As Syria reaches its fifth anniversary no-one expected the people of Syria to still be in this battle, but they are bleeding the al-Assad regime to death, which needs regular external assistance to just survive, rather than carry the battle to the rebels. The ceasefire in all likelihood will fail, as it doesn’t involve the rebel groups fighting the regime, how the US deals with this will to a large degree determine the future of the uprising in Syria.

The Battle for Aleppo