In the fourth part of this five part RO series looking at US-Israeli relations impact of the Eisen­hower Doc­trine on US-Israeli rela­tions and the Camp David Accord in 1978 are analyzed By Idrees Devries In 1957 America adopted the Eisenhower doctrine to guide its foreign policy. Because this doctrine promised support for any country threatened by communism, this was in effect a turning point in the relationship between America and Israel. [1] Israel came to be seen...
23rd July 20159 min 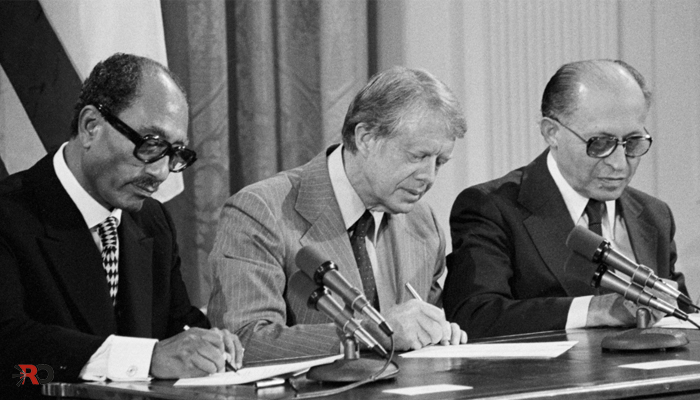 In 1957 America adopted the Eisenhower doctrine to guide its foreign policy. Because this doctrine promised support for any country threatened by communism, this was in effect a turning point in the relationship between America and Israel. [1] Israel came to be seen by America as an important “forward base,” from which the American military and intelligence services could work against communism in the Middle East. In return for providing this platform for anti-communist operations, America promised Israel that she would help her develop a military might capable of defending herself against any enemy in the region. [2]

This did not mean, however, that America now served Israel. The Six Day War of 1967 proved this. America was aware that her support for Israel could cause her to lose the sympathy of the Arabs, something the Soviet Union could exploit. She needed a plan, therefore, to push the Arabs away from communism. [3] This plan was a war in which the weapons bought by Egypt’s Abdul Nasser from the Eastern Bloc would be defeated by Israel’s American weapons, such that the Arabs would lose hope in communism and choose the side of capitalism once and for all.

Consequently, in May of 1967 Abdul Nasser of Egypt suddenly took on an aggressive position against Israel, after having been patient with Israeli terrorism in the Gaza strip and the Sinai region, suppressing domestic calls for war against Israel, and even engaging her in friendly – yet secret – talks for a considerable amount of time. [4] Abdul Nasser demanded removal of the United Nations peacekeepers in the Sinai, on the border between Egypt and Israel. To the surprise of many, the Americans said nothing in response and the United Nations agreed to his request. Thereafter Abdul Nasser blocked Israeli ships from using the Tiran Strait, which effectively cut Israel off from the Red Sea. Again America did nothing although in 1957 president Eisenhower had guaranteed Israel access to the Strait at all times. Israel felt betrayed and responded in exactly the way America wanted. It launched a surprise attack against Egypt, Jordan and Syria. Now, suddenly, America took a stand in the conflict. She came to Israel’s aid and supplied her with weapons with which Israel could defeat the armies of Egypt, Jordan and Syria and occupy strategic territories such as the Sinai desert in Egypt and the Golan Heights in Syria. The Soviet Union was infuriated by this action and demanded that the United Nations take action to ensure Israel withdrew. This time America used its veto power, however, and blocked the Soviet resolution from going through. [5]

The role of the Soviet Union in the Middle East was now finished as in the eyes of the Arabs she had lost the Six Day War. America was now in a position to build a new Middle East based on capitalism. America thought that if she were to solve the issue of Palestine, the Arabs would open up further to working with America. The new American plan for the Middle East therefore became “Land for Peace”, under which Israel had to return the Golan Heights and the West Bank to the Arabs, who in return would sign formal peace treaties with her and thereby acknowledge and accept her existence. America formalized this plan by submitting it to the United Nations, who adopted it through resolution 242. [6]

America was not afraid to pressure Israel into accepting this plan. The October War of 1973, when the American agents Anwar Sadat (Egypt) and Hafez Al Asad (Syria) launched an attack against Israel, was an example of this. [7] America stood by during and after the first wave of attacks and did nothing meaningful to help the Israelis. After a few days Israel became afraid she would be annihilated, and at that moment America suddenly built an “aerial bridge” to supply her with whatever she needed to win the war. [8] These events made Israel realize that she was completely dependent on America. Since the Six Day War some people in Israel had grown arrogant, thinking that because Israel had been able to defeat the Arabs at that occasion she no longer needed outside support. Consequently, these people called for an independent Israeli foreign policy which ignored whatever America wanted Israel to do. [9] The October War, however, brought Israeli society back to earth, so to say, and back into the American fold.

As far as the Arabs were concerned, America wanted the October War to completely devastate any hope they might still have of eradicating Israel. America wanted the Arabs to think that Israel could never be defeated and that they, therefore, might as well make peace with her. [10] (Britain did its best to block this American plan. On the night of the attack, on the 25th of September 1973, she sent King Abdullah of Jordan to Israel to inform the Israelis of what the British knew was about to happen [11])

The October War enabled America to bring the leading states in the Middle East to the table to agree to peace with Israel as per American terms. First, America arranged an end to the fighting on the basis of UN Resolution 242. [12] Thereafter Anwar Sadat of Egypt took the initiative to start direct talks with Israel for a lasting peace deal. In 1974 the two countries signed a formal treaty, which made Egypt the first Arab country to formally recognize Israel and accept her existence. [13] Then, in the spring of 1975, the American president Gerald Ford had a series of meetings with Anwar Sadat of Egypt, King Hussein of Jordan, Prime Minister Khaddam of Syria (the first assistant of Hafez Al Aasad and Yitzak Rabin of Israel. President Ford threatened the Israelis that if they did not do what America wanted and sign the peace treaties, America would halt all economic and military aid to her. [14] This, in the end, led to a meeting between the concerned parties in Camp David in 1978, during the presidency of Jimmy Carter, at which time Israel promised to hand back control of the lands she had taken during the 1967 and 1973 wars and to allow establishment of a Palestinian state, in return for formal recognition and acceptance of her existence. [15]

Part 3 – The American Empire and Israel

In part 5, Israel as an instrument of US policy is analysed

[5] “The 1967 Arab-Israel War”, US Department of State – Office of the Historian, http://history.state.gov/milestones/1961-1968/arab-israeli-war-1967; also “Controversies relating to the Six Day War”, https://en.wikipedia.org/wiki/Controversies_relating_to_the_Six-Day_War; en “Britain, Nasser and the Outbreak of the Six Day War”, Robert McNamara, Journal of Contemporary History, October 2000, www.jstor.org/stable/261063

[8] “In July 1972, Sadat expelled almost all of the 20,000 Soviet military advisers in the country and reoriented the country’s foreign policy to be more favorable to the United States”, https://en.wikipedia.org/wiki/Yom_Kippur_War; Regarding Hafiz Al Asad, the best indications for his closeness to America are his support for America during the 1990 Gulf War, America’s desire for his son Bashar to replace him at his death (as expressed by Madeline Albright at the time and for which the Syrian government quickly had to change the constitution), and America’s insistence during the current uprising in Syria that the state institutions built by the Al Asads must be maintained

The US-Iran Marriage in Vienna

Iran and the Geopolitics of Oil