In this third part of RO’s five part series look­ing at US-Israeli rela­tions: Past, present and future, the emergence of the us as the world super after WW2 and its impact on Israel is analysed By Idrees Devries After World War II the Zionist movement in America started to work amongst Christian circles as well, in order to get the Christians of America behind the idea of a Jewish state in Palestine. Consequently, the Zionist ideal...
8th July 20157 min 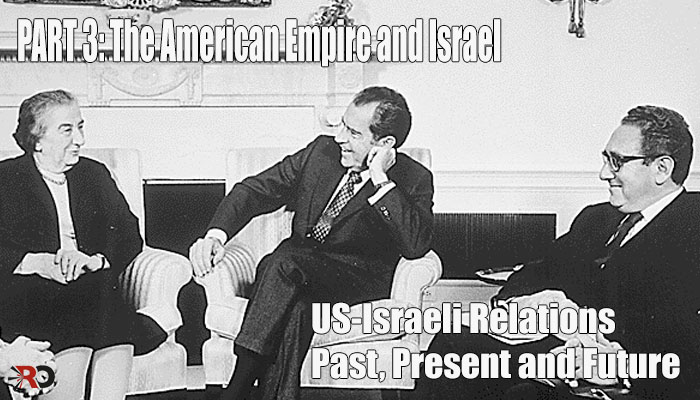 In this third part of RO’s five part series look­ing at US-Israeli rela­tions: Past, present and future, the emergence of the us as the world super after WW2 and its impact on Israel is analysed

After World War II the Zionist movement in America started to work amongst Christian circles as well, in order to get the Christians of America behind the idea of a Jewish state in Palestine. Consequently, the Zionist ideal became not just a matter of foreign policy but also a matter of domestic policy importance, as many American voters began to consider Israel when they casted their votes during elections. [21] This placed American politicians in a somewhat difficult position, since they now had to present themselves as both supporter and adversary of Israel. They wanted to be seen as adversaries of Israel by the foreign public, the Arabs especially, to ensure America could take over the leading role in the Middle East from Great Britain and open the area up for the American oil companies. And they wanted to be seen as supporters of Israel by the domestic public, to ensure they got their votes during elections. This caused the habit of American politicians to say one thing but do another regarding Israel.

America was aware of what Britain tried to do in the Middle East. In 1944 America had cut a deal with the King of Saudi-Arabia regarding oil, which had exposed to America the British conniving and backstabbing to get the deal undone. America was infuriated by this and France used this American sentiment to get America behind its plans for the Middle East. France had lost most of her influence in Syria to the British. She had therefore contacted the Zionists in Palestine with the aim of convincing them that an alliance with France would serve their interests better than an alliance with Britain. When the Zionists showed willingness to join hands with France, France tried to get America to join this pact since she knew she needed the American military and economic power to make the plan against Britain work. For this reason the French president Charles De Gaulle visited Washington DC during August 1945. [22] Immediately after this visit the American president Harry Truman began to pressure Britain to allow more Jewish refugees to immigrate to Palestine, in order to undermine the British plan for the region. [23]

At the same time the French tried to unite the various Zionist militias and form a single front against Britain. In October of 1945, during a visit to Paris, the prominent Zionist David Ben Gurion announced that this unification had indeed been achieved and that a Jewish Resistance had been formed. Ben Gurion then remained in Paris to direct the operations of this Jewish Resistance Force. [24]

America, however, was not in full support of an increase in violence in the region. It wanted a peaceful settlement of the Palestinian issue. She therefore recommended placing Palestine under control of the United Nations. [25] And, she implemented an arms embargo against all countries in the Middle East, including the lands controlled by the Zionists, to prevent a further escalation of violence and to strengthen America’s image of honest and independent peace broker. [26]

However, when in 1948 Israel declared independence, the American president realized that the British plans had been victorious over the French – American efforts. Much to the dislike of the establishment in the American Department of State, he changed the American plan and recognized Israel. The American representatives at the United Nations, who had until then always worked on the basis of the American plan calling for “stability and neutrality,” were so shocked that they resigned en masse. [27]

After World War II American foreign policy had two main aims. Firstly, America wanted to defeat the communist ideology and spread capitalism around the world. Secondly, within the capitalist world America wanted to take over the influence of the old powers Britain and France.

Due to these twin aims, there was a difference in opinion regarding Israel amongst American policy makers. Some argued that America should not be too close to Israel, since this would anger the Arabs and could make them turn to the Soviet Union. Because of the oil of the Middle East, this was a major concern. Others, however, argued that America should be especially close to Israel, since a successful Israel would effectively promote the secular, democratic capitalist model. President Truman was of the opinion that since the United Nations has supported the establishment of Israel, America did not run a too big risk of upsetting the Arabs if and when it supported Israel, as America could always justify such an action by stating it only followed international opinion as expressed by the UNSCP decision. The US president was therefore in favor of supporting Israel, just not to the detriment of the Arabs. The Middle East policy put in place by America at that time was therefore one under which both Israel and the Arab countries received American support. America thought that this way it could prevent the spread of communism in the region and take over the influence of Great-Britain and France. [28]

When General Dwight Eisenhower became American president this policy of being everyone’s friend in the Middle East was maintained. Israel, in other words, did not receive any preferential treatment from the Americans. She was seen as a state amidst other states in the Middle East and America’s objectives was to control all of them, in particular the oil producing ones. [29]

The Suez Crisis of 1956 made clear what exactly this meant for American – Israeli relations. The Americans had substantially damaged British influence in Egypt by supporting Jamal Abdul Nasser to rise to power. [30] In 1956 he proceeded to nationalize the Suez Canal, which had hitherto been a British possession. Obviously, the British were less than pleased with this loss of control over one of the main choke points for international trade. So she turned to France and Israel in an attempt to give Abdul Nasser a matching reply. The parties met in a place called Sèvres, close to Paris, and agreed to launch a military attack against Abdul Nasser to enable Britain to take the Suez Canal back, to enable Israel to occupy the Sinai desert, and to enable France to block Abdul Nasser’s support for the independence fighters in Algeria. [31] On the 29th of September 1956 the parties launched their assault. The Egyptian army was unable to put up much resistance and Abdul Nasser very quickly found himself at the end of the abyss. America was furious. President Eisenhower not only publicly criticized the military action, through the United Nations he also organized a military intervention to stop the fighting and push the Israeli army back behind the pre-1956 border. [32]

[21] “History of the US-Israel Relationship, Part I”, Alison Weir, www.informationclearinghouse.info/article31706.htm

[23] “Statement by the President Following the Adjournment of the Palestine Conference”, Truman Library, http://trumanlibrary.org/publicpapers/index.php?pid=1763&st=jews&st1=

[27] The United States and the Recognition of Israel: A Chronology, Truman Library, www.trumanlibrary.org/israel/palestin.htm

[31] http://en.wikipedia.org/wiki/Protocol_of_Sèvres; for more on the French interest in the partnership see “The Iron Wall: Israel and the Arab World”, Avi Shlaim, 2001

Does the US have a Strategy in Syria?

Israel’s Need for the Syrian Regime