By Bilal Khan The first export order of Pakistan’s first indigenously developed fighter jet (with extensive Chinese help), the JF-17, has been confirmed.  “A contract has been signed with an Asian country,” stated Air Commodore Khalid Mahmood, head of sales and marketing for the Pakistan Aeronautical Complex/Chengdu Aircraft Industry Corporation (PAC/CAC) at the biennially held Paris Air Show on June 14.[1] Khalid refused to name the country, making it all the more likely the customer...
23rd June 20155 min 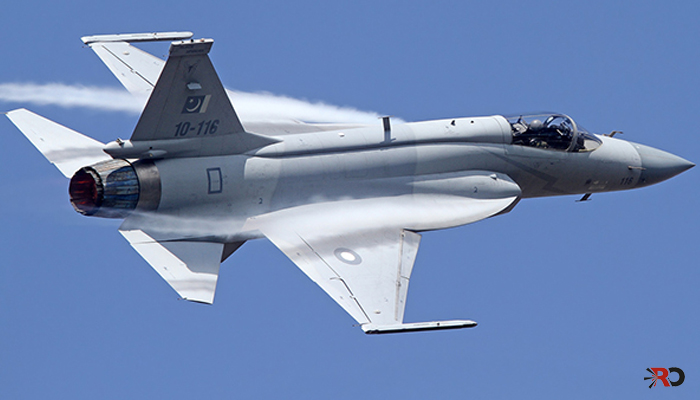 The first export order of Pakistan’s first indigenously developed fighter jet (with extensive Chinese help), the JF-17, has been confirmed.  “A contract has been signed with an Asian country,” stated Air Commodore Khalid Mahmood, head of sales and marketing for the Pakistan Aeronautical Complex/Chengdu Aircraft Industry Corporation (PAC/CAC) at the biennially held Paris Air Show on June 14.[1] Khalid refused to name the country, making it all the more likely the customer is Burma. Nor did he specify the number of planes to be sold, although he stated that deliveries will begin in 2017. Only a handful of nations possess the indigenous industries to produce fighter jets and even fewer have the capability to manufacture the components and parts necessary to produce such military platforms.  In this light the JF-17 enters a unique club of military platforms.

In 1999 Pakistan and China signed a contract to jointly develop a lightweight multi-role fighter. The program, which was finally initiated after 10 years of on and off attempts by the Pakistan Air Force (PAF) to secure a fighter aircraft that could be built locally for use as the mainstay of its combat fleet. The program, then labelled as “Super 7” was envisioned as a replacement for Pakistan’s ageing F-7 (Chinese MiG-21) and French-built Mirage III and V fighter aircraft. In addition to a modern radar and suite of avionics and electronic warfare and countermeasures systems, the Super 7 would be powered by the Russian RD-93 engine (a variant of the RD-33 used on the MiG-29). In August 2003, the first Super 7 prototype conducted its maiden flight in China, it was then renamed as the Joint Fighter-17 – JF-17 for short.

By 2015, the PAF had taken delivery of 54 JF-17 Block-I fighters (deployed across three squadrons), with an additional 96 (Block-II and Block-III) slotted for delivery by 2018. The Block-I variant (alongside the new-built F-16C/D Block-52+ ordered from the US in 2006-2007) introduced beyond visual range (BVR) air-to-air engagement and precision strike capabilities to the PAF. In other words, the PAF became capable of intercepting enemy aircraft at long-range (in excess of 70km) as well as in engaging ground targets with satellite guided bombs and missiles. This was a significant jump for the PAF which had mainly relied upon obsolete F-7s and Mirage III/V fighters, which lack these critical air combat capabilities. Like the F-16 in the PAF, the JF-17 was integrated as part of a network-centric combat management system involving a wide range of land, sea and air-based assets. The Block-II will introduce in-flight refuelling, allowing for the aircraft to refuel mid-flight with the PAF’s IL-78 tanker aircraft.

Moving forward the JF-17 will see additional upgrades. For example, the Block-III will be equipped with an Active Electronically Scanned Array (AESA) radar alongside a Helmet-Mounted Display and Sight (HMD/S) system. An AESA radar would allow the JF-17 numerous capabilities currently found in high-performance fighters such as the Eurofighter Typhoon and Rafale, such as (among others) the ability to effectively counter enemy jamming as well as track enemy aircraft with a lower probability of alerting the target’s radar warning receiver (i.e. the system that scans for enemy radar tracking). In addition, the HMD/S would augment the JF-17’s precision-strike and within visual range (WVR) capabilities. For example, if paired with a 4th or 5th generation WVR air-to-air missile, a JF-17 pilot could target and attack an enemy fighter by simply cueing it within his personal line-of-sight (i.e. by turning his head and facing the target). It is unclear exactly what the system the PAF would use to pair with the JF-17, but it is believed the A-Darter currently under development between South Africa and Brazil is being studied as an option.

It is difficult to understate how much of a jump the JF-17 has provided to the PAF in terms of boosting its combat capabilities. In the 1990s the PAF was an ailing force suffering from a rapidly widening qualitative gap with its rival, the Indian Air Force (IAF). Whereas the PAF was stuck trying to service variants of 1960s-era aircraft, the IAF was proceeding to modernize its fleet at a startling pace, most notably with the induction of the French Mirage 2000 and Russian MiG-29 and Su-30MKI (which had collectively imbued the IAF with BVR and precision strike capabilities). However, the turn of the current decade saw the PAF close this gap significantly, the JF-17 is allowing the PAF to propagate current as well as future air combat technology across its entire fleet. Although the Su-30MKI boasts a much higher payload and longer range than the JF-17, the prospect of having to subdue an enemy force with the exact same air capabilities (especially given the short-range war theatre between India and Pakistan) does not afford the IAF a decisive edge (which it did possess prior to 2010). [pullquote align=”right” color=”” class=”” cite=”” link=””]This is the first time Pakistani engineers have dabbled in jet development, as a result, the JF-17 should be viewed in this light.[/pullquote]

This does not mean the PAF’s efforts are unthreatened. The JF-17 was not meant as the sole solution, it was meant to be supplemented by a fairly sizable number of longer range, high-performance fighters – the F-16 and the Chinese FC-20 (an advanced variant of the J-10). Budgetary constraints resulting from the War on Terror as well as economic mismanagement by the Pakistani government delayed these Jets, at best (and thwarted them entirely, at worst). Had the situation gone the PAF’s way, it would be on track to build a fleet of at least 150 high-performance fighters, supplemented by up to 250 JF-17s (i.e. beyond its baseline requirement of 150). The fate of the additional 100 JF-17s and the completion of the high-performance fleet is effectively up in the air, though additional used and heavily upgraded F-16s may be procured to help compensate. But this is entirely dependent on the willingness of the US to release the requisite airframes and technology.

That said, the progress of the JF-17 program itself has not gone unnoticed. For example, Pakistan has made real progress in indigenizing the program, currently 52% of the airframe is produced at the Pakistan Aeronautical Complex in Kamra. In addition, the fighter’s export customer was secured during the 2015 Paris Air Show, though it is most likely to be Myanmar, though unconfirmed. Argentina also confirmed that it was interested in acquiring and co-producing the aircraft. As it stands, no other platform can offer capabilities such as beyond visual range air-to-air missiles and precision strike with the financial and political flexibility of the JF-17. Current F-7 and MiG-21 operators (e.g. Azerbaijan, Bangladesh, Nigeria, etc) are viewed as the most likely customers of the JF-17 in the coming years. This is the first time Pakistani engineers have dabbled in jet development, as a result, the JF-17 should be viewed in this light.

US-Israeli Relations - Past, Present and Future