US-Israeli relations have been a salient feature of the Middle East and a critical element of US policy in the region. But recent episodes such as Netanyahu’s visit to the US congress in March 2015, where the US president refused to meet the Israeli prime Minister indicates this relationship is changing. In this 5 part RO series, Idrees Devries analysis US-Israeli relations past, present and future Idrees Devries In the year 1896 Theodore Herzl wrote a...
20th June 20158 min 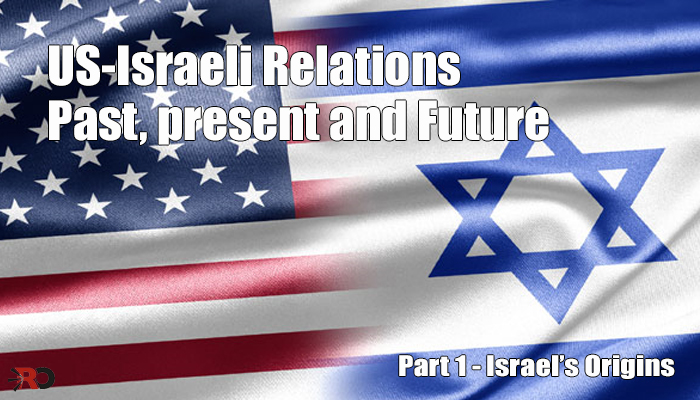 US-Israeli relations have been a salient feature of the Middle East and a critical element of US policy in the region. But recent episodes such as Netanyahu’s visit to the US congress in March 2015, where the US president refused to meet the Israeli prime Minister indicates this relationship is changing. In this 5 part RO series, Idrees Devries analysis US-Israeli relations past, present and future

In the year 1896 Theodore Herzl wrote a pamphlet titled “Der Judenstaat (The Jewish State)”, in which he called upon the Jewish people to establish a Jewish state. According to Herzl, himself Jewish, the attempts to assimilate in the European societies had not resolved the problem of anti-Semitism. According Herzl, only emigration to a Jewish state, somewhere in the world, could solve the problems of the European Jewry.

Herzl had his eyes set on the lands of Palestine and therefore contacted the Ottoman Khalifah Abdul Hamid II who at the time ruled over the area. The Khalifah, however, adamantly refused him an audience. Herzl therefore also contacted the German Emperor Wilhelm II, whose country was in an alliance with the Ottoman Khilafah, hoping he would be able to convince him to support the project. While the German Emperor did agree to meet Herzl, in Palestine even, he too would not provide any meaningful support to the Zionist Movement. [1]

The Zionists then began approaching the leaders of the countries with animosity towards the Ottoman Khilafah, offering Jewish support for their battle against the Muslims if in return the Zionists would be allowed to establish their state in Palestine once the Muslims were defeated. In Britain Lord Lionel Walter Rothschild [2] and Chaim Weizmann [3] led this effort. In the United States two lawyers represented the Zionists, Louis Brandeis [4] and Felix Frankfurter [5]. Brandeis was a close personal friend of Woodrow Wilson (US president from 1913 until 1921) while Frankfurter was friends with Franklin Roosevelt (US president from 1933 until 1945). Both eventually became members of the Supreme Court of the United States.

Rothschild and Weizmann got the British behind their plan. They built links with British politicians such as Lloyd George, a later Prime Minister, Arthur Balfour, a later Foreign Secretary, Herbert Samuel, a later High Commissioner of Palestine, and Mark Sykes, and got them to agree with the idea of a Jewish state in Palestine that would act as a supporter of the British plans for the region. Weizmann told the British politicians: “England … would have in the Jews the best possible friends, who would be the best national interpreters of ideas in the eastern countries and would serve as a bridge between the two civilizations. That again is not a material argument, but certainly it ought to carry great weight with any politician who likes to look 50 years ahead.” [6] In addition, the Zionists promised the British that in return for their support for the Zionist cause, the Zionists would ensure America entered the war against Germany on the side of Britain. [7]

This lobbying effort was successful and got the government of Britain to formally support the plan to establish in Palestine a Jewish state. In 1917 Lord Arthur Balfour, at that moment the British Foreign Secretary, sent Lord Rothschild a letter which said: “Dear Lord Rothschild, I have much pleasure in conveying to you, on behalf of His Majesty’s Government, the following declaration of sympathy with Jewish Zionist aspirations which has been submitted to, and approved by, the Cabinet. ‘His Majesty’s Government view with favour the establishment in Palestine of a national home for the Jewish people, and will use their best endeavours to facilitate the achievement of this object, it being clearly understood that nothing shall be done which may prejudice the civil and religious rights of existing non-Jewish communities in Palestine, or the rights and political status enjoyed by Jews in any other country’. I should be grateful if you would bring this declaration to the knowledge of the Zionist Federation. Yours sincerely, Arthur James Balfour” [8]

America and the Balfour Declaration

In 1917 America did not yet have a specific, independent plan for the Middle-East. It wanted to take over Britain’s influence in the world, for which reason president Wilson promoted the idea of “independence for colonized people” around the world, but it had not yet formulated an alternative for British colonialism in Palestine.

However, since the idea of a Jewish state did not necessarily conflict with the idea of “independence for colonized people,” America had no real arguments against it. Especially since the threat to the Arab’s right to independence that the Jewish state could entail was explicitly addressed by the Balfour Declaration when it said that “nothing shall be done which may prejudice the civil and religious rights of existing non-Jewish communities in Palestine.”

Consequently, America was not explicitly against the Balfour Declaration and the establishment of a Jewish state in Palestine, although this was part of the British geopolitical plan.

Following the defeat of Imperial Germany and the Ottoman Khilafah in World War I, Britain had executed the plan she had developed for the Middle East in 1916. She had agreed with France a partitioning of the area, the so-called Sykes-Picot agreement [9], as part of which Palestine would come under British control. Following the end of fighting Britain and France organized international conferences to gather international support for this agreement between them. In 1919 they therefore organized the San Remo Conference, in order to convince Italy and Japan to accept the plan. [10] America had also been invited to officially participate in the conference, but she refused as she did not want to be part of the British – French plans. Instead, America sent observers to the conference. After having received from the Italians and Japanese the nod to go ahead, Britain and France approached the League of Nations, the predecessor of the United Nations, to get it to approve the Sykes-Picot agreement as well.

America did its best to block the plan of Britain and France. It formed a committee to investigate what the people of the Middle East wanted. The committee was headed by Henry King and Charles Crane, who, during the Versailles Peace Conference of 1919, reported that the Arabs wanted independence. And, King and Crane reported, if for some reason they could not have full independence, the Arabs preferred to be ruled by America rather than come under British or French colonialism. On the side of this fundamental criticism of the British – French plan for the Middle East King and Crane also argued against the establishment of a Jewish state in Palestine, as according to them this would lead to suppression of the Arab’s right to independence. Through the King-Crane Committee America took a formal stand against a Jewish state in Palestine, in other words. [11]

During World War II both Britain and America tried to remain on friendly footing with as many nations as possible.

The British therefore worked to establish an agreement between the Zionists and the Arabs about Palestine, such that the Zionists could establish their state will full agreement from everyone concerned. This plan was first formulated in 1937 by the British Peel Committee lead by Lord Peel. [12]

In part due to the war America did not actively resist this British plan. President Franklin Roosevelt also tried to remain friends with everyone of importance and hence he spoke of American support for establishment of Israel in front of supporters of Zionism, while at the same time promising the anti-Zionist Jews in America as well as the Arabs of the Middle East that America would always support the principles of independence and democracy and therefore not support any resolution regarding Palestine that was not supported by all concerned parties. [13]

[13] “The Uncertain Friendship: The U.S. and Israel from Roosevelt to Kennedy”, Herbert Drucks, 2001

Is Time Running out for Bashar al-Assad?