By Adnan Khan It has been a difficult week for Russia. On 2nd December 2014, the Kremlin’s deputy prime minister, Alexi Vedev revealed the Russian economy will fall into recession in 2015.[1] This was a day after the Russian rouble suffered its biggest one-day fall since 1998. The currency has already lost 40% in value this year.[2] In November 2014, Russia’s finance minister Anton Siluano confirmed Russia was losing up to $140 billion per year...
4th December 20147 min 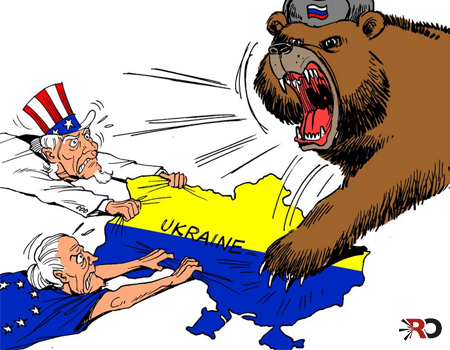 It has been a difficult week for Russia. On 2nd December 2014, the Kremlin’s deputy prime minister, Alexi Vedev revealed the Russian economy will fall into recession in 2015.[1] This was a day after the Russian rouble suffered its biggest one-day fall since 1998. The currency has already lost 40% in value this year.[2] In November 2014, Russia’s finance minister Anton Siluano confirmed Russia was losing up to $140 billion per year because of falling oil prices. 25% of the Russian economy relies upon proceeds from energy exports, whilst half the government budget is from energy sales. Russia loses $1 billion for every dollar the price of oil falls below $105. It is believed $125 billion in capital flight has left Russia in 2014.[3] The crisis in the Russian economy is a direct result of the Ukraine conflict, which began exactly this time last year. With diplomatic and political tools failing to halt Russia’s advance in Ukraine, the US turned to using energy as a weapon to halt the Russian march into Ukraine.

The installation of Victor Yanukovych in 2010 strengthened Russia’s position in Ukraine. He got the Constitutional Court to invalidate constitutional amendments adopted during the Orange Revolution in 2005. He formally ended Ukraine’s attempts to join NATO and agreed to extend the lease for Russia’s Black Sea Fleet in Crimea until 2042, from the original withdrawal date of 2017. But Yanukovych’s term as pres­i­dent was char­ac­terised by incom­pe­tency and author­i­tar­i­an­ism and when he backed out from the EU association agreement in late 2013 protesters took the streets to overthrow him. Throughout December 2013 and January 2014 protests grew in size and scope and when protesters were fired upon and killed the international outcry led to foreign interference by Europe and the US and by the end of February 2014, Russia’s man had fled Ukraine only to show up in Moscow a few days later. The west had reversed four years of Russian gains.

Even before the ouster of Yanukovych the EU and the US openly supported the pro-Western protesters. EU officials were openly meeting with protesters in Kiev square, on 11 December 2014 Christin Ash­ton, the EU’s for­eign pol­icy com­mis­sioner met with oppo­si­tion leaders.[4] US Senator John McCain visited the Ukrainian capital and met with key government and opposition leaders.[5] US Assistant Secretary of State Victoria Nuland also visited Independence Square in the Ukrainian capital Kiev on Wednesday 11 December and met with protesters.[6] A bugged phone conversation in which a senior US diplomat disparages the EU over the Ukraine crisis was leaked in February 2014 which highlighted the central role the US was playing in the post-Yanukovych government.[7] By May 2014 the EU was able to bring to power the pro-EU candidate Petro Poroshenko as president of Ukraine and he immediately signed the EU agreement that Yanukovich had abandoned as well as a financial assistance package with the International Monetary Fund. This solidified Ukraine’s pro-EU status. When the new Ukrainian government emerged the US propped up the pro-West government through loans and economic guarantees in order to weed it away from Russia. In March 2014 the US House passed a measure to allow $1 billion in loan guarantees to Ukraine.

Russia reacted with the swift annexation of Crimea. Rus­sia used a so-called snap mil­i­tary exer­cise to dis­tract atten­tion and hide prepa­ra­tions for the invasion of Crimea.[8] Then spe­cially trained troops, with­out iden­ti­fi­ca­tion patches, moved quickly to secure key instal­la­tions on the Crimean penin­sula. Once these were secured, Russ­ian forces cut tele­ 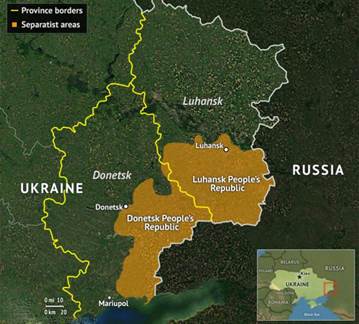 phone lines, jammed com­mu­ni­ca­tions and used cyber­war­fare to cut off the Ukrain­ian mil­i­tary forces on the penin­sula. When US offi­cials demanded Rus­sia pull back from Crimea, the Krem­lin raised the stakes by mass­ing around 40,000 troops near Ukraine’s east­ern bor­der. Russia solidified its position in Eastern Ukraine with the presence of its troops, it effectively initiated a pro-Russian separatist rebellion in the eastern provinces of Donetsk and Luhansk. The Kremlin sent small, well-equipped teams across the Ukrain­ian bor­der to seize gov­ern­ment build­ings that could be turned over to sym­pa­this­ers and local mili­tias. Russia has continued sending more troops and equipment into separatist-held Eastern Ukraine, despite the September 5 ceasefire. Russia has consolidated the gains it has made securing separatist held territory that they control. Ukraine lacks the military capability to confront the separatist forces that are backed by Russia.

In response to this significant Russian reversal of western gains the US government announced sanctions against Ukrainian, Crimean and Russian officials. The US targeted a precise list of Russian officials who were important tacticians within the Kremlin. The EU also drew up its own list of sanction targets. The effect of these sanctions was zero, as none of these officials had ever traveled to the EU or the US and had no bank accounts in those regions. By September 2014 the Ukraine conflict became a frozen conflict with the US supporting the government in Kiev, who remained unable to impose its will on the pro-Russian East of Ukraine. It was here the US attempted to ruin the Russian economy. 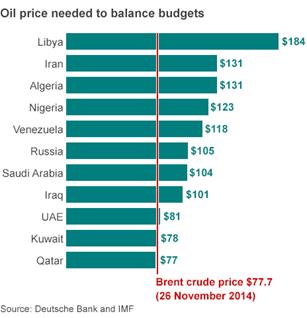 the eastern Donbass region, US Secretary of state John Kerry visited Jeddah to see King Abdullah at his summer residence. This meeting was reported as part of Kerry’s campaign to secure Arab support in the fight against ISIS but Saudi actions immediately after this meeting prove something very different was agreed. The Saudi’s raised oil production and cut its crude price. The Saudis produce a barrel of oil for less than $30 as break-even in the national budget, the Russians need $105. Shortly after Kerry’s visit, the Saudis began increasing production by more than 100,000 barrels daily during the rest of September 2014. In November the Saudi’s dropped the price of Arab Light by 45 cents a barrel, sending prices to $78 a barrel.[9] The impact of this has been felt immediately by the Russians, calls have begun to grow on Putin to cut Russia’s ambitious defence spending program,[10] and on December 2nd 2014 Putin announced Russia will no longer pursue the $40 billion South Stream natural gas project.[11]

There is no doubt this latest move by the US will hurt Russia, but the strategic importance of Ukraine will in all likelihood see the Russians not giving into to US provocations. Despite suf­fer­ing set­backs in Ukraine, nei­ther the gov­ern­ment in Kiev or Wash­ing­ton and Brus­sels has been able to remove Rus­sia from Ukraine. This is because the con­flict in Ukraine sim­ply mat­ters much more to Rus­sia than it does to Ukraine’s west­ern allies. But Russia will need to respond with an equally strong action. It could refuse the payment for its oil and gas in dollars which would hurt the US economy or it could arm the Syrian rebels which the US has looked to sideline. Whatever the outcome, the conflict over Ukraine is far from over.

The Next Space Race

Cutting Through the Terrorist Hysteria