By Adnan Khan As Indian Prime Minister Narendra Modi reached his first 100 days in office the Indian military achieved a number of military milestones. In September, India’s space programme succeeded at its first attempt in an operational mission to Mars.[1] The Mangalyaan satellite cost a mere $74 million, which, by Western standards, is staggeringly cheap.[2] On October 16 2014 Indian scientists successfully launched the third of the seven satellites planned under the Indian Regional...
22nd October 20147 min 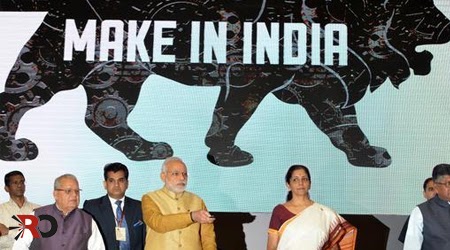 As Indian Prime Minister Narendra Modi reached his first 100 days in office the Indian military achieved a number of military milestones. In September, India’s space programme succeeded at its first attempt in an operational mission to Mars.[1] The Mangalyaan satellite cost a mere $74 million, which, by Western standards, is staggeringly cheap.[2] On October 16 2014 Indian scientists successfully launched the third of the seven satellites planned under the Indian Regional Navigation Satellite System (IRNSS), moving India closer to achieving its long-cherished strategic goal of having its own satellite navigation system.[3] When the fourth satellite is launched in a few months, the country will join the elite group of spacefaring powers, like the US with the Global Positioning System (GPS), Russia with GLONASS, Europe with is Galileo, China with Beidou, and Japan’s Quasi Zenith Satellite System. Satellites require launch vehicles and missiles to get into space and here India has also recently made significant strides. On October 17 2014 India’s defense scientists successfully test-fired the Nirbhay (which means fearless) nuclear-capable cruise missile. This Cruise missile is India’s equivalent of the US’ Tomahawk missile. The subsonic cruise missile can strike targets more than 700 km away and carry nuclear warheads. Despite these developments India’s military suffers from multiple issues which will constrain any attempt at power projection.

The Indian Air Force is one of the world’s largest air forces with both fixed and rotary wing aircraft. However, the bulk of Indian Air Force (IAF) aircraft today are outmoded and overall the force structure is deteriorating. The Soviet-era MiG-21 has been the combat backbone of India’s air force for 50 years with nearly 1,000 planes in its fleet. Aside from the purchase of Russian Su-30MKIs in 2002, the IAF has not made any additions to its fighter fleet since the 1980s. The sheer age of its air assets has caused a very high crash and accident rate within its fleet. In May 2012, India’s defence minister A. K. Antony admitted that 171 Indian pilots, 39 civilians, eight service personnel and one member of an aircrew had lost their lives in accidents with the MiG series of aircraft, between 1971 and April 2012.[4] The other cause of the high crash rate is the state of the IAF trainer fleet. The Comptroller and Auditor General (CAG) of India said in 2008 that the IAF was facing an acute shortage of effective pilots due to the lack of adequate state-of-the-art training aircraft.[5] The bulk of the IAF trainer fleet is composed of indigenously made platforms by Hindustan Aeronautics Limited (HAL), which has suffered from numerous problems. For instance, the HPT-32 Deepak fleet was grounded in 2009 due to recurrent engine failure that led to numerous crashes.[6] The lack of a capable training fleet has forced new IAF pilots to undergo their basic training on the HAL Kiran of which India reportedly has less than 100![7]

Similar to its airforce, India’s navy remains restricted within the 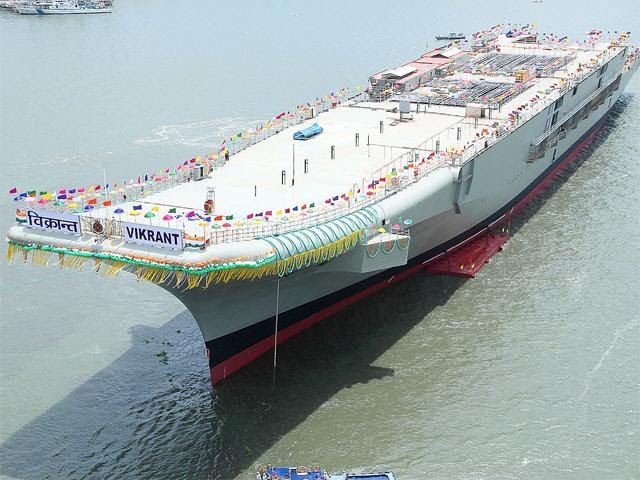 Indian Ocean basin and only occasionally operate beyond its region. For the moment India’s navy is limited by its small size and aging inventory.  Attempts to overcome this have seen extremely mixed results as a result all projects include heavy integration of weapon systems from foreign sources. India launched the Indian Navy Ship Vikrant with much fanfare in August 2013, the INS Vikrant is the first vessel of the Indigenous Aircraft Carrier program – India’s effort to design and build its own aircraft carriers. This ambitious plan with inexperienced domestic shipyards faced huge problems, delays and significant cost growth. The launch of the INS Vikrant came almost four years behind schedule, and the vessel was only approximately 30% complete; it will miss its current 2018 commissioning date by at least another two years. The Indigenous Aircraft Carrier effort is not the only carrier program facing significant delays and costs. As part of India’s plans to field a force of three carriers by 2020, Indian military leaders purchased the INS Vikramaditya, a modified Kiev-class aircraft carrier, from Russia. Originally set to be delivered in August 2008, the INS Vikramaditya faced consistent delays, faulty machinery and cost growth, although eventually delivered in 2014 at more than double its original price. With these delays The INS Viraat, for long the sole aircraft carrier in India’s naval service, underwent an extensive and costly refit to allow it to serve until the end of this decade. The INS Viraat, already having served twice its life expectancy, is old enough to consistently need maintenance work. 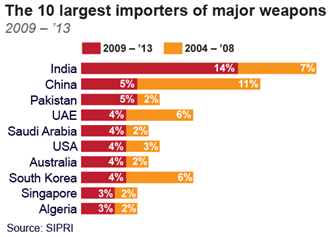 Despite substantial investment in capacity building, partnering and license production agreements with foreign companies and governments, India’s defence procurements continue to hover around the 70% imported and 30% indigenous threshold. The Indian Armed Forces are currently the world’s largest arms importer. Manoj Joshi, a fellow at the Observer Research Foundation, a policy group based in New Delhi highlighted: “India’s main problem as an arms manufacturer is a corrupt and inefficient government sector that has neither the expertise to develop top-notch weapons nor the wherewithal to make them in abundance.”[8] India is still one of the world’s largest importers of military equipment and despite two decades of efforts to develop its internal military capability it has failed to develop quality platforms. Pieter D. Wezeman, a senior researcher at the Stockholm International Peace Research Institute said: “I don’t think there’s another country in the world that has tried as hard as India to make weapons and failed as thoroughly.” Mr. Wezeman said he was sceptical that India’s new products would change that history, saying that its fighters, tanks and guns were “of questionable quality.”[9 ]A 2006 government audit of the Ordnance Factories revealed that about 40% of products had “not achieved the desired level of quality despite the fact that most items were in production for decades.”[10]

Due to poor infrastructure, stultifying labour rules and difficulties acquiring real estate, making anything in India is hard. The country’s manufacturing sector is declining and now represents 13% of the total economy. As an example in 2010, Sikorsky Aircraft, part of the American conglomerate United Technologies, opened a plant in Hyderabad that it operates jointly with Tata Advanced Systems. The facility assembles the cabin for its midsize helicopter, the S-92. The helicopter’s cabin was previously made at a Mitsubishi facility in Japan. Production was transferred to India not because costs were lower (in the end they were not), but because having a local facility might encourage sales in India, said Ashish Saraf, program manager for the Tata-Sikorsky joint venture, of which Sikorsky owns 26%. But the challenges were immense. New roads had to be built to the venture’s 11-acre site, and they came slowly. The company had to build its own facilities to treat water, handle sewage and harvest rainwater. It eventually got power from the state but operated initially from six backup generators, which must be kept operational for occasional power cuts.[11]

Since its founding India has had to import most of its weapons. Efforts to change this have failed so far. Efforts to create domestic defence industries have been crippled by corruption and bureaucracy. India has for long had a huge army which it has struggled to arm with modern weapons. Whilst a Pakistani invasion has influenced the armies’ posture for long, its real challenge is internal from the array of separatist groups which the army has struggled to contend with. Despite a rapidly growing economy which has brought new wealth into the country, decades of corruption and cronyism still haunt India and this remains a big obstacle in developing a state of the art military that can compete on the world stage. India’s most advanced military equipment is its ballistic missiles. Curiously this was seen as so important that politicians backed off and let the engineers get on with it.

The Syrian Intervention and the GCC