By Adnan Khan The battle for Ayn al-Arab, better known as Kobani, has been raging for over a month and has received global coverage as major news channels have remained fixated on the battle for the northern Syrian and Kurdish dominated city. Since the ISIS onslaught began in September, the towns pre-war population of 50,000 has crossed into Turkey as refugees. The end game in Kobani has gained considerable attention from the Kurdish population in...
27th October 20147 min 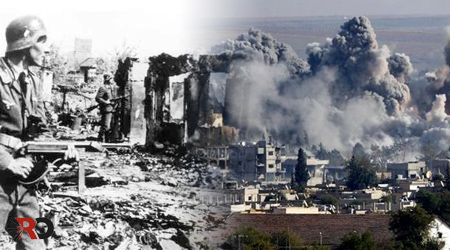 The battle for Ayn al-Arab, better known as Kobani, has been raging for over a month and has received global coverage as major news channels have remained fixated on the battle for the northern Syrian and Kurdish dominated city. Since the ISIS onslaught began in September, the towns pre-war population of 50,000 has crossed into Turkey as refugees. The end game in Kobani has gained considerable attention from the Kurdish population in Syria and the Kurdistan Regional Government in Iraq (KRG) who views the defence of the town as an existential struggle, even likening it to the Soviet defence of Stalingrad in 1943, which changed the course of World War 2. Despite the analogy with Stalingrad, Kobani remains of little strategic value to ISIS, Turkey, America and the wider Kurdish position in Syria and because Syria remains a dangerous country for reporters it is this factor that has allowed the Kobani battle, which can be reported on from relative safety across the Turkish border, gaining prominence in the global media. 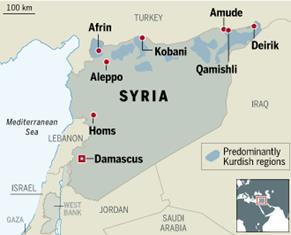 Ever since the Syrian uprising began, the Kurds of Northern Syria saw the opportunity to establish an autonomous region, which they have long called Rojava. The fight in Northern Syria beyond the areas of Der a Zour and Aleppo, is led by the Kurdish Democratic Party (PYD), which is the Syrian branch of the Turkish Kurdistan Workers Party (PKK), who have been at war with Turkey since the 1970s. Looking to expand Iraq’s Kurdistan region into Syria, the Kurds in the region established an umbrella governmental body known as the Kurdish Supreme Committee) which exists alongside  the Kurdish National Council, which is sponsored by Iraq’s Kurdistan Regional Government.  Al-Hasaka and the Afrin region of Aleppo contain the bulk of Syrian Kurdish- populated areas under the control of the People’s Protection Units. In comparison, Kobani is a small pocket and even smaller portion of the area populated by Kurds and controlled by the Kurdish militia group known as the People’s Protection Units. For the Kurds, Kobani is their Stalingrad and it is now a symbol of Kurdish defiance to ISIS. This is why the Kurds are pouring resources into the city to resist and repel ISIS. Like Stalingrad the locals are fighting building-to-building to the death before they let ISIS overrun their town.

The Turkish response aided ISIS in getting a foothold around Kobani. Although peace talks have been in full flow with the PKK, Erdogan saw an opportunity against the PKK – against whom it is been at war with for 30 years – and its extension in Syria, the PYD, to be defeated and crippled by ISIS.  As the Kurds in Iraq and the peshmerga forces have been defeated constantly by ISIS for Erdogan this was an opportunity to completely destroy the PKK and undermine its struggle. This short-term benefit of ISIS is the reason Erdogan insists that any action it takes against ISIS in Syria must also include the removal of Syrian President Bashar al Assad, which has obfuscated turkey’s real intentions. Leaving the Kurds of Kobani to defend themselves has seen many Kurds taking to the streets of turkey to demonstrate against the Erdogan led government. In just one month some 36 people have died in Kobani-related demonstrations.[1] A pro-Turkish government analyst highlighted the Turkish position: “But our government’s position on arming the PYD is clear. As President Recep Tayyip Erdogan says, since Ankara sees the PYD as a terror organization, it firmly rejects any arming of the Kurdish organization and no power can change Turkey’s mind. This is why Turkey is not pleased with what the United States did, and the basic discrepancy of views between the two countries continues.”[2] As the US began the airdrop of weapons to the Democratic Union Party (PYD) and its People’s Protection Units’ fighters in Kobani, Erdogan said “he did not understand why Kobani was so strategic for the US, because the town’s entire civilian population has fled.”[3] 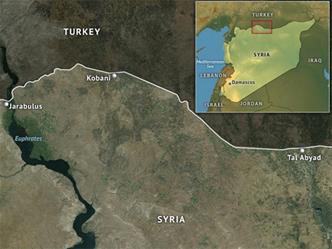 The US has continually downplayed Kobani, the moderately-sized Syrian city several miles from the Turkish border despite it being bombarded and shelled for over a month. Even when it looked as if Kobani’s defenders would fold to ISIS after several weeks of resistance, officials across the Obama administration downplayed the town’s significance in its overall campaign. Pentagon Spokesman Rear Adm. John Kirby highlighted the US position when he stated point blank that Kobani could fall, even with US and coalition aircraft conducting airstrikes on the town’s outskirts on a daily basis.[4] On October 13, US Secretary of State John Kerry went a step further and stated boldly that saving Kobani, however great that would be from a humanitarian perspective, was not a critical part of defeating the Islamic State in Iraq and Syria over the long-term.[5] “Kobani does not define the strategy for the coalition in respect to Daesh.” Kerry said. [6] ISIS success in Aleppo, Taqba and the Anbar province in Iraq are the priorities for the US

Kobani is of very little strategic or even operational value to ISIS and the taking of the town will have extremely little effect on the direction of the overall conflict in Syria. ISIS arguably accomplished its objectives in Kobani weeks ago when it seized virtually all of the area except for the town itself. Seizing the area enabled ISIS fighters to shorten the route between the captured border crossing towns of Jarabulus and Tal Abyad by not having to circumvent Kobani. Stratfor noted that numerous ISIS fighters recognised this fact early on and reportedly sought to prioritise other battlefronts but were overruled by ISIS commander Abu Bakr al-Baghdadi.[7] ISIS has recently made gains in Iraq’s Anbar province, but elected to send hundreds or thousands of fighters to Kobani exposing them to 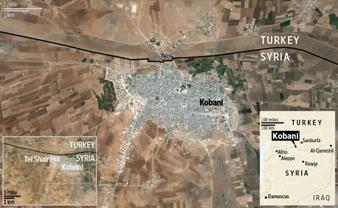 concentrated US airstrikes. By devoting disproportionate resources and personnel to seize a town of marginal importance, ISIS has distracted itself from more pressing issues in Syria, thereby missing opportunities to achieve further success in Iraq. The ISIS obsession with Kobani will set the group back considerably as it is clear now that for symbolic reasons it has greatly prioritised the seizure of Kobani and has devoted significant resources and manpower to the effort. This is similar to Germany’s disastrous obsession with Stalingrad in 1942, despite having already isolated and reduced the city to rubble.

Despite the portrayal of Kobani as an existential struggle that will turn the tide against ISIS, the ISIS leadership appear to be viewing the occupation of the town as such and in doing so they have failed to capitalise upon gains in more vital areas of Syria. Al-Assad’s forces have capitalized upon on the reduced ISIS presence in the far more important and larger city of Deir el-Zour. Whilst ISIS uses a slick marketing machine, the reality is the world’s media is focused on the defensive Kurdish and Free Syrian Army fighters holding out against repeated ISIS attacks and this is handing a propaganda victory to them. ISIS is now finding when it does take ground, any success quickly turns into a rallying cry for its opponents. Whatever the outcome in Kobani is, it is farfetched to consider it the beginning of the end for ISIS. This is why comparisons with Stalingrad, although fixated in the minds of Europeans, is stretching the battle too far. Any comparisons are fundamentally due to errors on part of ISIS, giving it more importance than its due.

Trouble Ahead for India Shining