By Adnan Khan Imran Khan and Dr Tahir-ul-Qadri managed to capture the attention of the 180 million populace of Pakistan as well as much of the world when they announced their Azadi march (Freedom march) at the end of June 2014, which was to take place on the country’s independence day – August 14.[1] Nearly two months on, their demands that Prime Minister Nawaz Sharif resign, due to the allegations of vote rigging in the...
8th October 20148 min 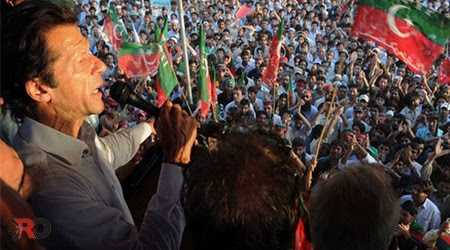 Imran Khan and Dr Tahir-ul-Qadri managed to capture the attention of the 180 million populace of Pakistan as well as much of the world when they announced their Azadi march (Freedom march) at the end of June 2014, which was to take place on the country’s independence day – August 14.[1] Nearly two months on, their demands that Prime Minister Nawaz Sharif resign, due to the allegations of vote rigging in the elections of May 2013, where Sharif won with a landslide victory, remain outstanding. As the ‘Darna’ (protests) fizzle out, both Khan and Qadri have attempted to maintain momentum through regular fiery speeches, against the Sharif government, sometimes even descending into mudslinging.  Amongst various demands the main demands remain the resignation of Sharif and reform of the electoral system as a whole. Both Khan and Qadri remain small players in Pakistan’s political system and their actions have been within the existing status quo, but Khan has gained significant political capital for a potential future leading role in Pakistan’s elaborate political system.

Nawaz Sharif’s third innings as leader of Pakistan, although historical, was also the first transfer of power from a democratically elected government to another in Pakistan’s history.[2] However, the best the outgoing government could muster regarding its term in office was the fact it completed its term. The out-going Asif Ali Zardari led government, left office with a long list of national failures, the economy was in shambles, a situation made worse by collapsing infrastructure in the power and energy sectors and high levels of insecurity and corruption.[3] Nawaz Sharif’s ruling PML-N government has done little to change the status quo. A severe energy crisis continues to plague the nation, with the basic price of fuel beyond the means of most people.[4] Pakistan’s economy is in such bad shape that inflation continues to spiral out of control.[5] The IMF and World Bank continue to force privatization, a policy which has always been a disaster in the country.[6]  The death and destruction due to the monsoon floods in Pakistan’s provinces of Punjab and Khyber Pakhtoonkhwa (KPK) only added to the resentment of the people against the Sharif government.[7] America also directly linked military and economic aid to operations in Waziristan,[8] operations which are deeply unpopular in Pakistan. With anti-regime sentiment sky high, it was in this light Khan and Qadri called for protests. 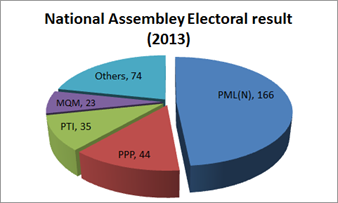 Pakistan’s media gave complete wall-to-wall coverage to the march which started from Lahore, a city which is 300 km from Islamabad. The media contributed to making the whole march much larger than it really was. For nearly two months both Khan and Qadri have given speeches reiterating their demand that Nawaz Sharif must go. As they were conducting protests in Islamabad in last August, their supporters attacked government buildings such as the parliament and even attempted to attack the Prime Minister’s residence in the city.[9] All of this gave a revolutionary atmosphere to the protests. Imran Khan’s claim of vote rigging cannot be taken seriously. Of the 342 seats in Pakistan’s parliament Sharif’s party won 147 seats, after the results were announced a further 19 independent politicians joined his party giving the PML-N 166 seats. Imran Khan’s PTI won a mere 35 seats. Imran Khan’s demand was the recounting of 6 constituencies and that Sharif should step down as Prime minister until the investigation is complete.[10] Sharif’s electoral victory was so large that if he subsequently lost these 6 constituencies, it would not affect the overall result of the election.

Such instability would be against US interests who desperately needs the Pakistan military to launch operations into the areas along the Af-Pak border. The response of the US has not been against the protests. The US Special Representative for Afghanistan and Pakistan, Daniel Feldman said in New York on 26 September:  “We believe all parties should work together to resolve their differences through peaceful dialogue in ways that strengthen Pakistan’s democracy and rule of law. We’ve always strongly opposed any efforts to impose extra constitutional changes to the democratic system….So peaceful protests, as we know from the US example, and freedom of expression are very important aspects of democracy.”[11] The US Ambassador to Pakistan, Richard Olson said on 25 September: “America opposes any kind of unconstitutional step in Pakistan, the situation emerging due to the protests was Pakistan’s internal matter.” He continued “We are pursuing American investors to invest in Pakistan.”[12] State Department Deputy Spokesperson Marie Harf told reporters on 21 August 2014: “We support the constitutional and electoral process in Pakistan, which elected Nawaz Sharif as the Prime Minister. That was a process they followed, an election they had, and we are focused on working with Pakistan.”[13] These US officials do not see the demonstrations changing the status quo and in effect supported both Imran Khan and Nawaz Sharif. Since emerging as the Prime minister, Nawaz Sharif has fulfilled every US demand that was required of him. Despite initially calling for talks with the Pakistani Taliban Sharif threw his full weight behind the operations in Waziristan. Since Narendra Modi emerged victorious in India’ Sharif has worked to normalise relations with India, something the US has wanted for years.

The army’s response is very revealing, especially since it has come under severe criticism not just from civilians for its operations in the FATA area, but particularly the mid-ranking officers and below, as well as soldiers and combatants. When the protests first started the army called for restraint on all sides, even though so many people descending on the country’s Capital city, Islamabad would create a security problem and paralyze government.  The army leadership then urged the government to facilitate negotiations, in effect accusing the government of being unreasonable.[14] When the protests turned violent the army ‘advised’ the government not to use force against violent protesters and told it to make whatever concessions necessary to Khan and Qadri.[15] When protesters attacked the parliament building on August 30 2014, the soldiers stationed there did nothing, this was why the protesters were able to attack the PTV channel headquarters.[16] The Dawn newspaper noted: “the army had not supported the police in trying to prevent the protesters from storming government buildings, as violent thugs attacked the Parliament, it was surely the army’s duty to repel them, but the soldiers stationed there did nothing, and the army leadership the next day warned the government instead of the protesters.”[17] PTI party president Javed Hashmi admitted in a press conference on 1 Sep 2014 that Imran Khan was essentially doing what he has been asked and encouraged to do by the army leadership. The Pakistan military press office confirmed that there had been regular meeting with both Khan and Qadri and Sharif and his representatives.[18]

General Raheel Sharif has in effect supported the protests and aided both Imran Khan and Tahirul Qadri, thus gave legitimacy to the protests. The army leadership has exploited the current anti-regime sentiments of the people to divert anger from them as they continue operations in Waziristan. Under the previous regime the army leadership blamed the government for not doing enough about terrorism and portraying their hand as being tied whilst the government blamed the army for the national security situation. Despite Kayani and Zardari no longer in their positions this blaming and deflecting of the public’s criticism of each other has continued into the Sharif-Raheel era. Thus the army is blaming Nawaz Sharif so as to prevent anger in the armed forces against them. The US is keeping a very close eye on the ground situation in Pakistan as the people demand change, but the US is struggling to find clean politicians who have credibility in the eyes of the people to maintain the status quo. Imran Khan remains the only politician, and these anti-regime protests have given him credibility for a future role in the political system. Both Qadri and Imran are not calling for real change but just cosmetic changes to Pakistan’s system and the US supports this as these protests will achieve the aim of ensuring the Arab spring does not reach Pakistan and real change does not take place.

The Syrian Intervention and the GCC