By Adnan Khan While much of the world was reacting to the news of US fighter jets pounding targets in Syria, 1,500 miles south of al-Raqqa in Yemen’s capital, Sanaa, Houthi tribesman stormed the countries capital city and occupied government buildings that included the defence ministry, the army headquarters, the parliament building, the central bank and the national radio station. The Peace and National Partnership Agreement was signed between the president Abdu Rabu Mansour Hadi...
1st October 20147 min 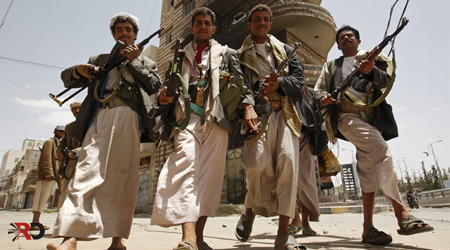 While much of the world was reacting to the news of US fighter jets pounding targets in Syria, 1,500 miles south of al-Raqqa in Yemen’s capital, Sanaa, Houthi tribesman stormed the countries capital city and occupied government buildings that included the defence ministry, the army headquarters, the parliament building, the central bank and the national radio station. The Peace and National Partnership Agreement was signed between the president Abdu Rabu Mansour Hadi and representatives of various political groups and movements with the Houthis at the presidential palace in Sana’a on Sunday 21 September 2014. This agreement took place with the Houthis occupying most of the capital city. The Houthis are a tribe from amongst the Zaidis (who follow Shi’ah fiqh) and the Zaidis represent 40% of Yemen’s population. For decades, however, the government in Sanaa marginalised and repressed the Zaidis, who were left to administer their rugged and resource-poor province in Saada, North Yemen. Yemen like much of the region experienced an uprising during the Arab spring and the current events are a continuation of this.

Even though Ali Abdullah Saleh for­mally stepped down as Pres­i­dent and elec­tions took place in Feb­ru­ary 2012 the polit­i­cal tran­si­tion in Yemen in no way con­sti­tuted regime change. The deal between the US, EU, GCC and Saleh merely gave Saleh a dig­ni­fied exit. Ever since the power-transfer agree­ment was signed, and despite reg­u­lar protests demand­ing that Saleh be stripped of his immu­nity and that he and his fam­ily face trial, Saleh’s fam­ily con­tin­ued to hold many high-level posi­tions through­out the gov­ern­ment, busi­ness com­mu­nity and secu­rity forces. In fact, Saleh him­self is still the head of the rul­ing Gen­eral People’s Con­gress (GPC) Party. The elections that took place brought to power Saleh’s long time right hand man – Abdu Rabu Mansour Hadi. The elections in fact only had one candidate – Hadi himself. In this way the Congress party was able to dilute the demand for real change from the people of Yemen and maintain the status quo. The Houthis fought the government on-and-off during the 2000s, and were big supporters of the 2011 Arab Spring uprising against then-President Saleh. Towson University’s Charles Schmitz highlighted the 2011 American-backed deal that replaced Saleh with Hadi didn’t satisfy the Houthis. The Houthis “had no representation in the transitional government,” Schmitz said, so they “regard the transitional government as no different from the old regime that conducted wars against them — in other words, a body that cannot be trusted.”[1]

When Saleh took power in North Yemen in 1978 and eventually became president of a unified Yemen with the south in 1990 he placed all his loyalists in key positions and used his position to maintain a firm grip on the nations few strategic assets. This corruption has led Yemen to become one of the world’s poorest countries. According to the United Nations, Yemen ranks 151st out of 177 countries on the human development index (HDI), a measure of life expectancy, education, and standard of living.[2] With an economy of only $16 billion Yemen’s population is impoverished with half of the country’s 27 million population living in poverty.[3] As a result many of Yemen’s population were forced to come together on a tribal basis due to the failure of central government to maintain security and meet their most basic needs. Today the north of Yemen remains primarily ruled by tribal politics and contains regions where competing sects live in proximity, such as the al-Houthis and Salafis in the northern province of Saada. In 1994 the south attempted to break away and become independent, resulting in a civil war. Many fighters who fought in the war against the Soviet invasion of Afghanistan returned to Yemen and eventually in 2009 formed al-Qaeda in the Arabian Peninsula (AQAP). Such a vast spectrum of rival tribes, sects, militants and separatist movements, would need a strong leader, but in the case of Saleh he played on these differences and kept the different tribes fighting each other, which allowed him to steal the wealth of the country.

The trigger for the current tensions was the removal of fuel subsidies in July 2014, which was a condition by the IMF for the Yemeni government to receive further loans. The IMF imposed the abolishment of the countries subsidy system, even though half of the nation’s population lives in poverty.[4] The Houthis played a key role in uprising against Saleh, but they have been subsequently sidelined in the development of subsequent transitional and then formal governments. With the price of fuel doubling this led to the Houthis setting up a protest camps in the capital, Sanaa. These protest camps spread through the North of Yemen and around the capital Sanaa. President Hadi attempted to appease the Houthis with promises to review the subsidy cuts, but this was rejected by the Houthis. This led to the security forces shooting dead many Houthi protesters, who were protesting outside the cabinet building in Sanaa.[5]  As a result of this the Houthis moved towards the capital, Sanaa in large numbers from the mountains that surround the capital and eventually took over government buildings which included the defence ministry, the army headquarters and the parliament building. President Hadi sensing the danger signed the Peace and National Partnership Agreement, with gave more power to the Houthis in forming the government including cabinet positions.[6]

What has made matters worse is the interference of the international community after the uprisings took place in 2011. The US used the war on ter­ror to under­mine Ali Abdul­lah Saleh by accus­ing Yemen of being a hub for Al Qaeda. Ali Abdul­lah Saleh attempted to appease the US with a host of secu­rity guar­an­tees which allowed the US to carry out drone attacks in the coun­try. The upris­ing gave the US the oppor­tu­nity to remove Saleh, who how­ever dug in his heels in the face of demands by his own peo­ple to leave. He even­tu­ally agreed to a tran­si­tion deal – led by the Gulf Coop­er­a­tion Coun­cil (GCC) – another US tool. How­ever Saleh was able to transfer power to his own deputy and maintain the position of his party in Yemeni politics. Two days after the rebels took over key state institutions in the capital, Hadi said in a speech at the presidential palace: “Sanaa is facing a conspiracy that will lead towards civil war,”[7] Hadi meant that there is an outside hand in the crisis. UK Ambassador to Yemen Jane Marriott visited Hadi on the eve of the Peace and National Partnership Agreement. Marriott reiterated her country’s full support to Yemen until completing the remaining tasks of the transitional phase successfully[8] i.e. she gave Britain’s full support to Hadi. The EU similarly in a statement on 22 Sep said: “Government institutions must return to the control of the legitimate authorities, under the leadership of President Abd Rabbo Mansour Hadi, the Head of State.”[9]

The peo­ple of Yemen rose up to remove a bru­tal dic­ta­tor.  The upris­ing saw the col­lapse of gov­ern­ment insti­tu­tions and the army as many defected. How­ever real change did not take place in Yemen; only a trans­fer of power within the rul­ing elite occurred. The neglect of most of the country by Saleh led to many rebellions and uprisings in the country. Saleh in the past dealt with many of them militarily. However the uprising in 2011 presented America with the opportunity to interfere in Yemen and remove Saleh once and for all due to his loyalty to Britain. Saleh has worked to maintain the status quo through giving concessions to all the various factions of the country – whilst always maintaining his position. For the moment the Houthis still occupy much of Sanaa, this is probably to ensure Hadi sticks to his promises that were made in the Peace and National Partnership Agreement.

Is Imran Khans ‘Dharna’ Fizzling Out?