In this second part of a two part series looking at the pillars of the Syrian stalemate the pillars of the Assad regime are analysed By Kasim Javed In May 2014 the rebels lost the “capital of the revolution” and Syria’s third largest city, Homs. Allowing the regime of al-Assad to consolidate control over the territory in central Syria. The regime has gained a significant advantage since Homs lies at the crossroads between Damascus and...
2nd June 20146 min 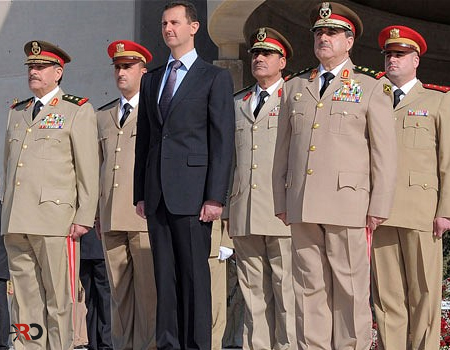 In May 2014 the rebels lost the “capital of the revolution” and Syria’s third largest city, Homs. Allowing the regime of al-Assad to consolidate control over the territory in central Syria. The regime has gained a significant advantage since Homs lies at the crossroads between Damascus and the coast serving as a critical supply line for the regime[1]. However, the revolution remains at stalemate due to both sides having key pillars of support which has prolonged the war. Despite suffering losses, defections and internal fractures the support structure that enables the regime to remain in its position of strength has largely remained intact despite periods of weakness. It is these pillars of strength that have kept the al-Assad regime in the game and if weakened or uprooted would shift the stalemate in Syria.

Firstly, unlike in Egypt where the army turned on Hosni Mubarak al-Assad has not had major defections from the central military leadership.  The Syrian military on the eve the the uprising consisted of 325,000 regular troops, of which 220,000 were army troops.[2] The majority of the Syrian military are Sunni, but most of the military leadership is Alawi. Assad’s elite units are predominantly Alawi such as the Republican Guard and the 4th armored division. Despite defections, desertions and casualties from the Syrian Army, they have been too small to make an impact on the strength of the army overall. Strategically important units of the army are always controlled by Alawi officers and despite the defection of tens of thousands; they have been mainly Sunni without access to vital command and control.[3] As al-Assad could not count on the loyalty of the majority of the Muslims soldiers, Sunni units were attached to more reliable forces as a means of controlling defections. Unless the military splits, the rebels effectively remain a group of guerilla fighters on the battlefield fighting al-Assad’s army of tanks and airplanes.

Secondly, al-Assad has maintained the loyalty of the minority Alawi population in Syria and is not viewed as a liability. Al-Assad very quickly framed the uprising as a sectarian one as this strengthened his position and turned  Alawi aganist  Sunni which has preserved his regime.  As a minority, the Alawi’s consist of at most 2.3 million people; 11% of the population. For the Alawi regime to subdue a Muslim majority, it has to control every aspect of the state’s apparatus. The Alawi’s permeated every sector of the state’s institutions and aligned themselves with other minorities like the Druze, Christians and Shi’ah in a position of unquestioned power. This sectarian base has not unraveled despite deaths within the Alawi officers that fuelled discontent of their families.  Though a sense of hopelessness led to some Alawi families questioning al-Assad’s authority which provoked his supporters into deadly clashes in his hometown of Qardaha, the heart of the Assad regime. This led to the death of Mohammed al-Assad, cousin of Basher al-Assad.[4] Alawi unity however, still remains a central pillar of support the al-Assad regime.

Thirdly, al-Assad has been provided significant cover by the West, which has preserved his regime.  The West despite lots of rhetoric against the regime has actually done nothing to weaken the al-Assad regime. The west have in fact done all they can to preserve his regime. The then Secretary of Defense Leon Panetta, explained in 2012 “I think it’s important when Assad leaves – and he will leave – to try to preserve stability in that country. And the best way to preserve that kind of stability is to maintain as much of the military, the police, as you can, along with the security forces, and hope that they will transition to a democratic form of government. That’s a key.”[5] US ambassador, Ryan Crocker then explained: “So we need to come to terms with a future that includes Assad – and consider that as bad as he is, there is something worse.”[6] Despite using Chemical weapons on more than one occasion the West argued about the complex mix of fighters in Syria. The West has been organizing the many rebel groups to agree a hierarchy amongst itself in order to enter into negotiations with the al-Assad regime and share power. All of this has strengthened al-Assad.

Fourthly, al-Assad has been given a lifeline through economic and material support from the likes of Iran and Russia. Iran has provided unwavering support to Damascus through the deployment of military specialists which include senior commanders from the elite revolutionary guard corps. Maplecroft a risk consultancy firm confirmed Iran’s role in training and coordinating “constitutes a lifeline for the regime” and that the involvement of the IRGC personnel and militias such as Hezbollah remains “crucial” to the Syria regime’s war effort.[7] Al-Assad is also backed by Russia who want to see him crush the opposition as they did themselves in Chechnya.[8] The absence of equipment, weapons, funds and diplomatic cover by external actors would result in the collapse of the regime. The international community has largely ignored the situation indicating their preference to keep the regime in place irrespective of the demands of the people.

Whilst the rebel groups made significant progress in their attempts to uproot the regime, forcing the regime troops to fight across the country and over stretching their capabilities. The regime focused on maintaining its stranglehold over key Alawi areas and the corridor between Damascus and Latakia and this forced it into a stalemate with the rebels. Since the stalemate, territories  have been lost and gained and this is part and parcel of war, bit until the key pillars of regime support are weakened or removed the uprising in Syria will remain at a stalemate.