The following is the first instalment of a four part series looking at the geopolitical importance of the oil industry. This first instalment looks at the origins of the oil industry.   By Idries Devries The origin of the modern oil industry lies in the middle of the 19th century, when a group of American businessmen hired Professor Benjamin Silliman Jr. to investigate whether a thick black substance that bubbled up in various springs...
22nd January 20144 min 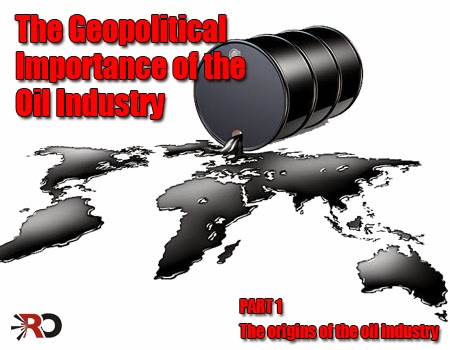 By Idries Devries
The origin of the modern oil industry lies in the middle of the 19th century, when a group of American businessmen hired Professor Benjamin Silliman Jr. to investigate whether a thick black substance that bubbled up in various springs and salt mines in Pennsylvania known as “Rock Oil” could be used as a fuel for oil lamps. Silliman studied the Rock Oil and learned that through a process of distillation a fluid could be extracted which made for an excellent fuel for oil lamps.
Not long after, in 1859, Edwin D. Drake opened up a tremendous source of supply of Rock Oil which helped the kerosene-industry to skyrocket. Through utilizing technology originally developed for drilling water wells, “Colonel” Drake was able to tap into a source of Rock Oil below ground. Thanks to “Colonel” Drake, therefore, Rock Oil no longer had to be gathered from ponds and salt mines in small quantities at a time, but it could be gathered and made available for distillation in large quantities from a single location.
Following this innovation the kerosene-industry could benefit from an abundant supply of cheap raw material, which enabled it to underprice its vegetable and fat based lamp oil competitors. Very quickly, kerosene became a multi-million dollar, global business.
In 1865 the American entrepreneur John D. Rockefeller entered the Rock Oil refining business. Starting with one small refinery, he innovated by integrating into this business the activities upstream and downstream from refining. Eventually he was able to bring the entire American oil industry – from the production and refining of the crude oil, to transporting and marketing the kerosene – under the control of his Standard Oil Company, from which ExxonMobil and Chevron would later emerge.
In other parts of the world entrepreneurs tried to enter the kerosene business as well.

Baku, which today is in Azerbaijan but during the 19th century it was part of the Russian Empire, had since time immemorial been known for its “eternal fires” – places where oil and gas seeped to the surface and had (been) ignited. Knowing this, the Swedish Nobel brothers Robert, Ludvig and Alfred saw an opportunity to establish in Russia what Rockefeller had established in America. With financing from the French arm of the Rothschild family they founded the Branobel oil company and eventually managed to bring Russian oil production, refining, transport and marketing under their control.

Further east Indonesia would become a competitor to American and Russian kerosene. A Dutchman named Aeilko Zijlker was once travelling for business on the Indonesian island of Sumatra and learned from his local guide that there were ponds there filled with a thick black liquid that the locals used to make torches. Zijlker was so fascinated by the brightness of the flame of these torches that he took a sample of the black liquid and had it analysed in Jakarta. After tests confirmed the fluid was Rock Oil containing large amounts of kerosene, Zijlker established the Royal Dutch petroleum company to market the Indonesian oil. Eventually Royal Dutch teamed up with the British sea-shipping firm SHELL to become Royal Dutch / SHELL.
As far as the Middle East is concerned, there the kerosene business began in 1901 when a British businessmen named William Knox D’Arcy decided he wanted to benefit from the known Rock Oil seepages in Persia. In return for a small sum Knox D’Arcy was able to motivate the Shah to sign a contract for a 60 year concession covering most of Persia. Thereafter, however, D’Arcy struggled to finance the exploration and development activities, which drove Knox D’Arcy into the arms of the British government. On the advice of Thomas Boverton Redwood, the leading oil-industry expert of his time, Knox D’Arcy approached the British government for a loan for his business. Redwood was also an advisor to the British government and he saw potential in oil as a fuel for the British Royal Navy – a fuel superior to coal. Redwood wanted to ensure the British developed access to oil independent from the foreign companies in America, Russia and Indonesia and therefore sought to bring Knox D’Arcy and the British government together in a business venture. Eventually, Redwood was able to convince the British government to support Knox D’Arcy. The Anglo-Persian Oil Company (APOC), which would later on become British Petroleum (BP), was thus formed as a partnership between the two parties, and oil began flowing from Persia to Great Britain.
Part 2 in the series will look at the emergence of oil as a strategic commodity
previous

The Arab Spring and Syria: 3 Years on

The Arab Spring: 3 Years on