By Adnan Khan Muhammad Morsi, the now disgraced and overthrown President of Egypt, received a rude awakening on the first anniversary of his rule, as the head of the Egyptian Armed Forces, General Sisi orchestrated the removal of Morsi from power; effectively a coup. Widespread protests rocked Egypt as many took to the streets to vent their frustrations at the Muslim Brotherhood (MB) dominated government. The MB swept to power under the Freedom and Justice...
4th July 20136 min 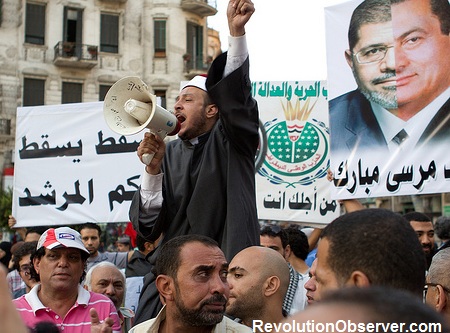 By Adnan Khan
Muhammad Morsi, the now disgraced and overthrown President of Egypt, received a rude awakening on the first anniversary of his rule, as the head of the Egyptian Armed Forces, General Sisi orchestrated the removal of Morsi from power; effectively a coup. Widespread protests rocked Egypt as many took to the streets to vent their frustrations at the Muslim Brotherhood (MB) dominated government. The MB swept to power under the Freedom and Justice Party (FJP), winning the parliamentary elections in early 2012 and then subsequently winning the presidential run-off.  A year on, however, the political career of both Morsi and the MB has been brought to an abrupt end. The MB struggled to solve the myriad of problems that faced Egypt, while simultaneously battling thugs in the street, a seditious opposition, corruption in the judiciary, and a state that is in shambles at many levels. As Morsi and the MB determine their futures, RO reviews the four fundamental reasons why the MB find themselves no longer in power.
Firstly, the MB-dominated government inherited an economy which was already on the verge of collapse. The lack of a clear economic roadmap made the economical situation worse. The problem with the Egyptian economy is that an elite few are in control of it. When large parts of the economy were privatized, the country’s assets went right into the hands of Mubarak’s friends. These business tycoons still maintain control over the Egyptian economy,[1] something Morsi never attempted to change. This maldistribution led to a situation where 40% of Egyptian population live below the poverty line.[2] These big business elites moved much of their wealth out of the country when Mubarak fell, leading to a big fall of the Egyptian pound, drastically raising the cost of imports.[3] Since Egypt is reliant upon agricultural and energy imports, this created a massive trade imbalance and lead to MB’s decision to turn to the IMF. As inflation spiraled out of control and unemployment rose many have taken to the streets in protest.
Secondly, Morsi failed to placate much of the opposition, who took every opportunity to undermine his rule. The secular opposition, Mubarak-era officials, and the business elite never accepted the MB electoral victory, and never will – their key demand has always been  that Morsi must step down.[4] The MB have had to contend with persistent insurrection since coming to power, and Morsi attempted to deal with this by sacking the prosecutor general Abdel-Maguid Mahmoud and assigning himself powers over the legislative and executive branches as well as immunity from the courts. This backfired, leading to mass riots and stand-off in the streets of Cairo. Morsi failed to integrate the opposition, divide them, or weaken them. As a result, opposition figures carried out regular, often violent, demonstrations to undermine Morsi’s rule, bringing the country to a standstill.
Thirdly, the Morsi regime has been plagued with indecisiveness and the inability to deal with pressing problems as it lacks a grand vision. After an 80 year struggle against tyranny, MB’s rise to power has made it patently clear that the MB had no clear policy positions. Since the election victory, the MB has gone to great lengths to demonstrate its moderation to the West. Indeed in its rush to placate so-called international opinion, they abandoned all commitment to Islamic governance. When it came to applying Islamic principles they cited constitutional barriers and the need to keep minorities onside. When it came to applying Islamic economics, they cited the need to avoid scaring international investors and tourists. When it came to applying the Islamic foreign policy, they cited the need to show a moderate image and to appease the West. Slogans such as ‘Islam is the solution,’ were very quickly replaced with a call for a civil state. Morsi immediately sent a communiqué confirming Egypt’s commitment to peaceful ties with Israel.[5] The initial calls for Islam were completely removed from Morsi’s statements as he settled into power.
Fourthly, the MB have shown they lack political awareness by entering a political process which was established by Gamal Abdul Nasser and which the army maintains. The army’s interference in the running of the country and disproportionate influence weakens the President. The army, since the ouster of Mubarak, has allowed the day-to-day running of the country in the hands of the government, but has kept foreign policy firmly within its own hands. The minister of defence is always the head of the army in Egypt. Any policy, such as the defence budget that could affect the army’s position were always overruled. As a result, the MB has had to toe the army’s line, giving up whatever plans it had on its own agenda. Rather than attempting to challenge the political system in Egypt with the mandate it received in the elections, the MB abandoned whatever it stood for.
Despite compromising on everything the MB stood for, this was never enough for the secular elements, who wished to emerge victorious from the latest demonstrations. On the economic front it was evident that both Morsi and MB had no clear vision. Dealing with the region, Morsi did nothing to change the status quo, but maintained what his predecessors constructed.  Despite over 80 years touting ‘Islam is the solution,’ when the opportunity presented itself the MB failed to meet the challenge governance posed. As a result, despite winning the elections, they were always on the backfoot defending their rule. The demonstrations against their rule grew in scope as the MB failed to placate the opposition, eventually bringing the country to a standstill, which was when the army moved in. The irony of the turmoil in Egypt is: despite the MB never implementing Islam to appease the West and the secularists, on the anniversary of their rule they were thrown out of government.

US Imperial Designs for Bangladesh

Egypt After Morsi: Chaos or Bloodshed?