By Shafiul Huq  Recently, we have witnessed a flurry of high-level meetings between U.S. and Bangladeshi government officials. In May 2012, then Secretary of State, Hillary Clinton, made a visit to Dhaka while the US Seventh Fleet Commander Vice Admiral Scott H. Swift also visited Dhaka in April this year. The U.S. Under Secretary of State for Political Affairs, Wendy R Sherman, was in Dhaka this May for the second U.S.-Bangladesh Partnership Dialogue meeting. Also...
1st July 20135 min 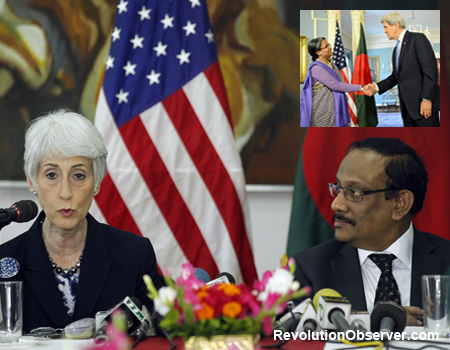 Recently, we have witnessed a flurry of high-level meetings between U.S. and Bangladeshi government officials. In May 2012, then Secretary of State, Hillary Clinton, made a visit to Dhaka while the US Seventh Fleet Commander Vice Admiral Scott H. Swift also visited Dhaka in April this year. The U.S. Under Secretary of State for Political Affairs, Wendy R Sherman, was in Dhaka this May for the second U.S.-Bangladesh Partnership Dialogue meeting. Also in the month of May, Bangladeshi Foreign Minister, Dipu Moni, visited the US to meet with the current Secretary of State, John Kerry. This demonstrates that the U.S. has a number of strategic and economic interests in Bangladesh and that these visits are aimed at concluding agreements in order to secure these interests.

In terms of strategic objectives, the U.S. intends to ‘re-balance’ the Asia Pacific region in order to contain the rise of China. In January 2012, the U.S. Department of Defense released a report titled “Sustaining U.S. Global Leadership: Priorities For 21st Century Defense”, which stated the following, in terms of US strategy towards the Asia Pacific: “… we will of necessity re-balance toward the Asia-Pacific region … The maintenance of … U.S. influence in this dynamic region will depend in part on an underlying balance of military capability and presence. Over the long term, China’s emergence as a regional power will have the potential to affect the U.S. economy and our security in a variety of ways … the growth of China’s military power must be accompanied by greater clarity of its strategic intentions in order to avoid causing friction in the region.“[1]

As part of this “rebalancing” act, the U.S. has increased military cooperation with China’s neighbours, the U.S. plans to move 60% of its navy fleet and air force to the Asia Pacific region, and has even called for a meeting with the defence ministers of the ASEAN countries (a block of 10 countries in Southeast Asia not including China) for the first time. In the same vein, the US has been seeking to sign a military cooperation deal with Dhaka known as the Acquisition and Cross-Servicing Agreement (ACSA) “aimed at enhancing the rapid deployment capability of the US forces far away from their bases.“[2]

In a leaked Wikileaks cable, the U.S. Embassy in Colombo wrote to the U.S. Pacific Command regarding the benefits of signing a similar deal with Sri Lanka: “The signing will expand [the Department of Defense] DoD’s capacity and capability to conduct global operations by adding another logistical option in South Asia, which ultimately reduces cost and provides flexibility to US forces moving through the region.”[3] Therefore, while China continues to flex its muscles, the U.S. is signing defense agreements and subjugating the Bangladeshi military and its facilities to the disposal of the U.S., furthering its strategic objectives in South Asia.

With regards to economic interests, the U.S. has been pressuring Bangladesh to sign the Trade and Investment Cooperation Framework agreement (TICFA) since 2001, but none of the previous Bangladeshi governments were able to sign the deal due to the strong public opinion against it. Though talks of signing the TICFA have resurfaced again, the Bangladeshi government has kept the public totally in the dark regarding the terms of the deal. But gauging from similar deals signed with other countries such as Pakistan and Egypt, it is assumed that this economic agreement would entail the typical capitalist prescriptions of trade liberalisation, more privatisation and the enforcement of intellectual property rights.

However, this time the U.S. is trying a different tactic to extort Bangladesh into signing the TICFA. The two recent garment factory tragedies have provided an excuse for the U.S. to threaten to remove Bangladeshi products from the Generalised System of Preference (GSP), which allows certain Bangladeshi products duty free access to the U.S. The Awami League government has jumped on to this opportunity; ringing alarm bells about possible cancellation of the GSP and claiming that the way to thwart it is signing the TICFA with the U.S. For example, the Bangladeshi Commerce Minister GM Quader said, “We wanted to follow a go-slow policy in signing the Trade and Investment Cooperation Framework Agreement (TICFA). But they say we are delaying it as we do not want to ensure labour rights. That’s why it has become urgent for us to sign it quickly … I hope the GSP facility will not be cancelled. We will have to sign the TICFA to protect this.”[4]

The pretentious stance of the government is obvious to all; because the duty-free products under the GSP account for less than 1% of total Bangladeshi exports to the U.S. In fact, Bangladesh pays a much higher rate of tariff (about 15%) to the U.S. compared to what the EU pays, totalling about $720 million per year. Moreover, textile products are not included in the GSP facility, and its cancellation will not necessarily improve working conditions in Bangladesh’s garments industry. Hence, protection of the GSP for Bangladeshi exports to the U.S. hardly makes a good case for signing the TICFA.[5] It is quite clear that the US, with the collusion of the Bangladeshi government, intends to turn Bangladesh into one of its pawns in the South Asian region. But to what extent the people will be able to recognize and resist such colonial designs remains to be seen.

The Ousting of Egypt's Morsi