By Muhammad Mustafa Mustaan After twelve years of fighting, countless lives lost, tens of thousands of their fighters sacrificed, the Taliban opened their political office in Qatar. The aim of the office is to commence peace talks with the very entity that invaded Afghanistan.[1] The United States has been pushing for this for a long time, via the regime of Hamid Karzai. This is a sure sign that the escalating financial and human cost of...
27th June 20136 min 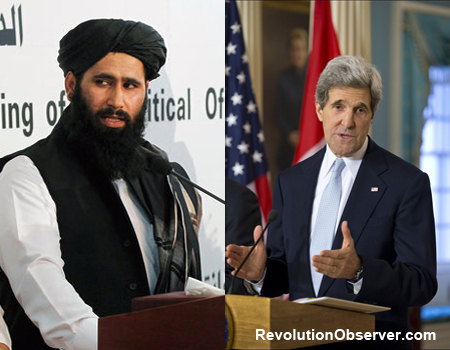 By Muhammad Mustafa Mustaan
After twelve years of fighting, countless lives lost, tens of thousands of their fighters sacrificed, the Taliban opened their political office in Qatar. The aim of the office is to commence peace talks with the very entity that invaded Afghanistan.[1] The United States has been pushing for this for a long time, via the regime of Hamid Karzai. This is a sure sign that the escalating financial and human cost of the conflict has brought the US to a stage where it has effectively conceded defeat.
Despite initiating the peace talks and paying a high price during the process – including the assassination of the ex-head of Afghan Peace Council – the Afghan government was caught off-guard with this development, leading to a stiff resistance towards it. As a result, the negotiations for the final stage of a strategic partnership between Afghanistan and the United States have been halted and the Afghan government has announced no intention of participating in the negotiations.[2] Karzai’s excuse was the removal of the Taliban’s white flag as well as the use of the “Islamic Emirate of Afghanistan” title, which the Taliban swiftly amended after they came under pressure from the United States, who also forced Karzai to change his stance.[3]
In a televised interview, Motasim Agha Jan, the Chief of Taliban’s Political Committee, disclosed a shift in the Taliban’s policy for participating in peace talks. The Taliban has also changed their stance towards the Afghan security and government personnel, no longer considering them as non-Muslims, as well as retracting a fatwa which permits harming them. In addition, he called those of the Taliban who do not support the peace talks with the invaders of the country, as extremists.[4] This reveals fractures amongst the Taliban over joining in the process. What needs to be understood is why would the Taliban, after having the upper hand in the war come to the negotiating table in the first place? In addition, why is the Afghan government not a direct negotiator in the proceedings whilst claiming to be the direct stakeholder in establishing peace in the country? Moreover, what prompts this significant shift amongst a portion of Taliban and what are the underlying motives behind it?
Talks under the guise of negotiations have been taking place since 2008. However both the US and the Taliban had conditions for talks to proceed. The conditions of accepting the American drafted Afghan constitution, was not accepted by the Taliban, whilst the Taliban’s condition of the full withdrawal of foreign troops for negotiations to proceed were not accepted by the US. Even though the US has rejected negotiations from the first day, and despite these avowed positions, talks under various guises have developed.[5]
It has not been the choice of the Taliban to negotiate, but of the United States itself, who through its agent leadership in the Pakistani Army have forced the Taliban to come to the table. According to US and Pakistani officials the role of Pakistani intelligence in pressurizing the Taliban to come to table has been effective.[6] In addition, according to Wahid Muzhda, a prominent Afghan journalist, General Shuja Pasha, ex-chief of Pakistani Intelligence has been appointed as an intelligence advisor for the gulf region and has been stationed in Doha, Qatar for the last six months. If true, this shows, how much the Pakistani military leadership is not only involved in facilitating the US to achieve its long-term goals in the region, but also reveals its essential role in influencing the US’ opposition.
What we find from these developments is that the current Afghan government’s main role is to provide legitimacy for the US long-term presence in the country and the entire region. Pakistan is still able to control the Taliban leadership and can force them into fulfilling any of their demands if the need occurs. The United States is under tremendous pressure from its public – despite the profitability of war for its Military Industrial Complex – so it cannot continue suffering the financial and human loss and as a result has been forced to accept to negotiate. Lastly, despite the Taliban’s original position to never negotiate until all US forces are withdrawn, they proved to be more pragmatic.
There are three possible outcomes to these negotiations:
1. Dividing of the Taliban: Reimplementation of the Somali style of divide and rule policy in Afghanistan, where a portion of the Islamic Courts were brought in to power while those remaining were left to continue fighting that resulted in internal bloodshed.
2. Dividing Afghanistan: The Taliban will be brought in to power in a manner to provoke some of the Northern Alliance leaders, who mostly are made up of ultra-nationalist non-Pashtun ethnic centered parties and individuals, resulting in the secession of the north from the rest of the country. Russia and India have already shown concern over the process, and will support northern alliance, as they have done so historically in the past.
3. Vietnamization of the country: These negotiations will not crystallize in any meaningful outcome and will just derail the nation and lead to further organised chaos. This possibly would be facilitated by the Afghan local police, and other militia made of the old warring groups.
The negotiations initiated by Taliban and the US will not solve the real problems of the people of Afghanistan; that is foreign occupation, and thus will not result in any long-term peace. The expected outcome on the contrary, is more horrific and will result in more bloodshed and destruction, ultimately, only fulfilling the US’ colonial agenda in the region.
[1] http://world.time.com/2013/06/19/the-talibans-qatar-office-are-prospects-for-peace-already-doomed/
[2] http://www.nytimes.com/2013/06/20/world/asia/taliban-kill-4-americans-after-seeking-peace-talks.html
[3] http://www.tolonews.com/en/afghanistan/10923-karzai-backlash-resulted-removal-of-taliban-flag-in-doha
[4] http://www.tolonews.com/en/afghanistan/10916-taliban-political-committee-chief-calls-attacks-on-afghan-security-forces-impermissible-
[5] http://www.nytimes.com/2001/12/07/news/07iht-attack_ed3__7.html

Why There is No Cold War in Syria

US Imperial Designs for Bangladesh