By Abu Anas On May 25th, Hezbollah’s chief, Hassan Nasrallah, declared that his Lebanese based Shia militia will fight with all its capacity to save the Syrian regime.[1] After several maneuvers in the last few months, walking the tightrope of public diplomacy, he finally admitted his direct involvement in supporting Bashar al-Assad’s brutal crackdown on the Syrian Revolution. In pushing out the Israeli occupation from Lebanon in 2000 and it’s tactical victory over Israel in...
5th June 20135 min 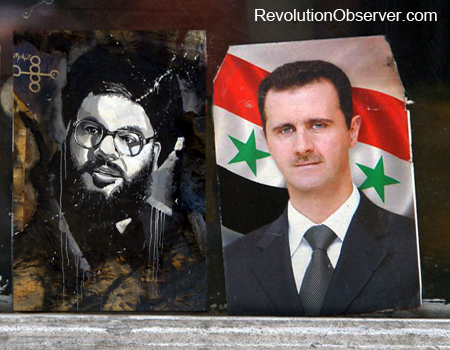 By Abu Anas
On May 25th, Hezbollah’s chief, Hassan Nasrallah, declared that his Lebanese based Shia militia will fight with all its capacity to save the Syrian regime.[1] After several maneuvers in the last few months, walking the tightrope of public diplomacy, he finally admitted his direct involvement in supporting Bashar al-Assad’s brutal crackdown on the Syrian Revolution. In pushing out the Israeli occupation from Lebanon in 2000 and it’s tactical victory over Israel in 2006, Hezbollah skyrocketed in fame amongst all Arabs, including even Sunnis. Siding with the oppressive regime in Damascus, however, has destroyed any goodwill Hezbollah had within the Sunni majority of the Middle East. Nasrallah, Arabic for “God’s victory”, became famously Narsallat, or “idol’s victory” and his party of God became known as the party of Satan within the media and the masses.
Both Hezbollah and Hamas were sponsored by the Assad regime; but unlike Hamas, which has smartly pulled out of Syria and sided with the revolting Arab populations to sustain its popular base, Hezbollah stuck to the regime. From a strategic perspective, Hamas did not have a choice since it is a Sunni based group that relies on its popular base for survival on the Palestinian theater. Sticking to a regime who has been murdering people en mass, raping women and even torturing children would have ended Hamas’ political existence. Hezbollah’s Shia base afforded the group a leeway for political maneuvering, but there are several other reasons behind its strategic posturing.
Firstly, Hezbollah was initially established in the mid 80s in Southern Lebanon, which was under Israeli occupation. The elements that founded Hezbollah were the more religious types of the Shia populous in general, and from the secular Amal Party in particular who were intrigued by the Iranian revolution and the framework of thinking that gave rise to the idea of the Wilayat al-Faqih of Imam Khomeini. Iranian Revolutionary Guard leaders established, trained and funded the new organization to become its arm in Lebanon under the guise of liberating Lebanon from Israel. It is this organic dependency that renders Hezbollah a mere tool within Iranian influence in the area, and hence the direction of Iranian authorities for complete and unquestioned support of their ally, Assad, whether this is in the interest of Hezbollah or not.
Secondly, aside from the physical support and funding that Iran provides as the main benefactor for Hezbollah, the ideological influence is just as intense, if not greater. Hassan Nasrallah, then leader-to-be, stated in his speech, from old footage dated back to 1988, that “he would not be in Hezbollah if its leadership wasn’t practically and religiously reporting to the chain of command of the Wilayat al-Faqih in Iran, since otherwise it is considered a sin.”[2] This strong doctrinal affiliation of Hezbollah also gives the religious authority in Iran a complete leverage over its strategic decisions.
Third is the Lebanese geography, which is surrounded by Syria from the north and the east. The Mediterranean Sea is to its west and Israel, Hezbollah’s claimed foe, lies in the south. The Assad regime, since the time of Hafez al-Assad, has adopted Hezbollah in an alliance and provided the needed Iranian weapons to it through its long borders with Lebanon. Syria has become the noose by which Hezbollah is controlled, since it is its sole lifeline. Unlike Hamas, which is geographically far from Syria and is more dependent on Egypt, Hezbollah is totally dependent on the Assad regime for its supplies.
Fourth is the geopolitical situation worldwide from Hezbollah’s perspective. Hezbollah fears that if the rebels topple the Assad regime, a subsequent Sunni government would cooperate with its neighbors against the Shia expansionist project in the region, therefore it would discontinue Hezbollah’s support and threaten its existence. What is more critical to Hezbollah is the world powers’ united stance against a sweeping victory for the rebels over Assad’s regime. Thus far the UN, US, European as well as Russian position towards the Syrian revolution is a negotiated political transition which will protect the current regime’s apparatus (security, military and business) and give the rebels seats in a future government. The winner in this formula is without a doubt the Assad regime and, by association, Hezbollah. Supporting Assad’s regime now acts as Hezbollah’s insurance policy for the future.
Hezbollah’s strategic calculus is that the rebels will lose and be forced to sit down with Assad, and that the real power will stay in the hands of the current regime. This calculation, in addition to Iranian military and religious influence, have structured Hezbollah’s relationship with Assad. Hezbollah has put all of its eggs in one basket, the regime’s, and if the regime is gone, the very existence of Hezbollah will come into question. Many in the rebels are now expressing sentiments of exacting revenge upon Hezbollah post-Assad Syria, so it would have been wiser to stay equidistant from both sides to mitigate these risks. Hezbollah forgot that both currently and historically, the real stake will always be with the masses, since no regime can withstand its own people’s uprising.
[1] BBC, “Hezbollah leader Nasrallah vows victory in Syria,” http://www.bbc.co.uk/news/world-middle-east-22669230

Protests in Turkey, an Uprising?