By Adnan Khan “This is the first battle Erdoğan lost in recent memory. He overreached — his hubris, arrogance and authoritarian impulse hit a wall.”[1] This is how one columnist described the protests that have rocked Turkey for the past week. While Turkey is not immune from protests and has had its fair share in recent history, it is clear that something much larger than the destruction of trees close to Istanbul’s Taksim Square, is...
8th June 20135 min 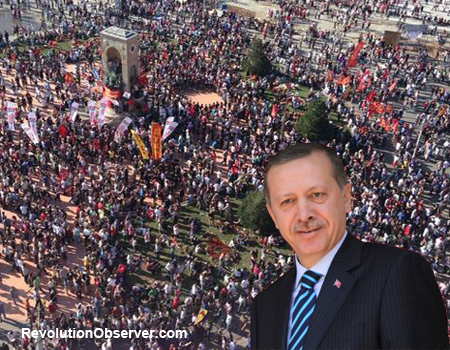 By Adnan Khan
“This is the first battle Erdoğan lost in recent memory. He overreached — his hubris, arrogance and authoritarian impulse hit a wall.”[1] This is how one columnist described the protests that have rocked Turkey for the past week. While Turkey is not immune from protests and has had its fair share in recent history, it is clear that something much larger than the destruction of trees close to Istanbul’s Taksim Square, is driving the unrest. Given Turkey’s accessibility to the Internet, the clashes have been described in vivid detail online, with many videos capturing both the carnival-like atmosphere on the streets and the heavy-handed police response. While the protests have spread to other areas they have remained in the thousands, and with Recep Tayyip Erdoğan’s significant support base, it remains to be seen how much impact the current unrest will have on Erdoğan’s grip on power.
Protests began on May 28, when a small group composed mostly of young environmentalists gathered in Istanbul’s Taksim Square as trees were to be cut to make way for a major new development that reportedly includes a shopping mall, a mosque and a rebuilt Ottoman-era military barracks. The initially peaceful demonstration turned violent the night of May 30, when police tried to break up what had grown to more than 100 protesters. By the weekend more than 10,000 people gathered in Taksim Square, and the protesters were further emboldened when the leadership of the the Kemalist Republican People’s Party (CHP), the main opposition party to the AKP government, joined the protests.

The size and scope of the protests, however, need to be kept in perspective. Whilst protests spread to a number of other cities such as Izmir, Eskisehir, Mugla, Yalova, Antalya, Bolu and Adana, these are Republican People’s Party strongholds and one would expect them to bring out a large number of supporters. The largest protests, in Istanbul and Izmir, brought out predominantly young protesters in the tens of thousands. The protests would be highly significant if they grow to the hundreds of thousands. “Many pundits have argued that demonstrators were from multiple segments of Turkish society. It is true, to an extent — but the majority appear to have come from segments of the population already inclined to dislike Erdoğan. Most were middle class youth, somewhere between 20 to 30 years old, with liberal sensibilities that clashed with the Turkish government’s social conservative bent.” [2]
Since taking power Erdoğan and his party, the AKP, have gone from strength to strength. Erdoğan is a conservative secularist who tries to appeal to the Islamic popular base, in no way an Islamist, and the AKP is a wide coalition of progressive-minded politicians and businessmen who were fed up with the old guard of the Kemalist “Ataturk” republic, represented by the army and the CHP party. On sweeping to victory in the 2002 elections, Erdoğan initiated reforms to weaken the army’s hold on the country. The peace process with the Kurdistan Workers’ Party to end their insurgency is on the verge of bearing fruits. Erdoğan created a new breed of business elite who now form a powerful coalition of party-affiliated businessmen and media outlets whose livelihoods depend on the political order that Erdoğan continues to construct. For the secular elements in Turkey who have seen their power erode considerably during his reign, the final straw is Erdoğan’s constitutional referendum which will transform Turkey from a parliamentary system to a presidential system. Such change would enable Erdoğan to continue leading Turkey as president beyond 2015, when presidential elections are scheduled.
One resident of Istanbul who participated in the protests, said: “We want to protect our environment, our park in Taksim Square, we want to protect Ataturk’s ideas and thinking… Recep Tayyip Erdoğan is against Mr. Kemal Ataturk.”[2] This encapsulates Turkey’s current unrest. What is taking place in Istanbul is no Arab Spring, it is not the oppressed poor rising up against dictatorial rule. It rather is a minority from a position of weakness seeing their secular outlook disappearing day-by-day. For them everything the Erdoğan government does is an attempt to Islamise the country. So when alcohol sales are restricted a disagreement about legislation becomes a battle between democratic loving youth on one side and a religious “zealot” in the form of Erdoğan on the other. On this occasion, the CHP is riding the wave of environmental concerns about this development project to protests and weaken Erdoğan.
The ongoing struggle in Turkey is not between an Islamic movement and a secularist one. Rather, the feuding parties are all secular, including the AKP. Erdoğan and the AKP use the Islamic sentiments of the majority of Turks to further their agenda. On the political front, the AKP seeks to shift power from the old elite dating back to the British influence in WWI to a new elite that is more in stream with American policies and interests in the region. Such strategy is by no means an “Islamisation” agenda. Rather, it is an agenda that exploits Islamic tendencies in the majority of the Turkish people to strengthen the secular foundations of the state. The polarizing effect of the recent demonstrations on the religious/secular fault lines of Turkish society actually strengthens Erdogan’s popularity among his supporters by downplaying his secular credentials and boosting his image as a “defender of the faithful”. If the opposition can coalesce into a unified group that can sustain protests, the most they can achieve is to extract concessions from the AKP or weaken its government.