By Bilal KhanThe fall of Taftanaz Air Base to the armed opposition at the beginning of January marked a significant shift in the war against Assad’s regime, particularly in Syria’s northern region. Taftanaz had been a major helicopter and logistics-supply base for the Syrian forces in Idlib province.[1] Its capture has severely mitigated Assad’s capacity to not only engage in short-range aerial attacks in the region, but has far wider implications in terms of his...
25th January 20135 min 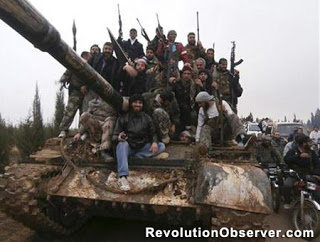 The fall of Taftanaz Air Base to the armed opposition at the beginning of January marked a significant shift in the war against Assad’s regime, particularly in Syria’s northern region. Taftanaz had been a major helicopter and logistics-supply base for the Syrian forces in Idlib province.[1] Its capture has severely mitigated Assad’s capacity to not only engage in short-range aerial attacks in the region, but has far wider implications in terms of his grasp of the country.
As land-based supply routes in the North became increasingly risky for Assad’s forces (due to the increasing presence of the opposition), Taftanaz became vital in ensuring that ammunition and other necessary supplies for government forces were restocked (through air-transport).[1] The loss of Taftanaz (and its logistical importance) effectively blocks Assad’s forces from carrying out their offensives in Idlib, and has put other bases in the North, such as Wadi Deif and Hamdiyeh, on the defensive against increasing opposition attacks.[2] Serving a similar purpose as Taftanaz, another major air base in the North, Mannagh, is also under pressure by the opposition, the capture of which would result in the opposition being able to claim control of the North.[3]
The loss of northern bases to the opposition will pose significant challenges for Assad’s forces. On the one hand, Assad’s reliance upon air power as an important means to level decisive damage against the opposition (particularly civilians)[4]  will be curtailed, at least in terms of northern offensives, such as in Idlib.[4] The unavailability of air bases in the North for refuelling and re-supply will place additional pressure on Syrian air bases in other regions in terms of mounting northern offensives, namely by forcing a greater concern for fuel (thus reducing the shipment of weapons). Further successes for the opposition would also force the regime to fortify base defences elsewhere in the country, thus diverting resources away from offensively sieging opposition-administered-areas.
The Institute for the Study of War (ISW) estimated (in October 2012) that the Syrian Air Force would be unable to deploy more than 200 of its fighter aircraft and helicopters (i.e. 30% of its total fleet).[4] This is primarily due to maintenance restraints (such as depletion of spare-parts)[4], but one could also attribute further depletion of this power as a result of the mounting financial costs of the war, as well as an increasingly precarious human resources situation. An example of this could include the reported defection of a Syrian air force pilot with his MiG fighter on 19 January 2013.[5] Upon receiving orders to attack a civilian area in Ghotta region, the pilot instead bombarded government bases in Moadamiya district.[5] In addition, there are accounts of increased animosity and distrust between Alawite and Sunni personnel still stationed to defend key military facilities.[3] Such instances indicate the corrosion of discipline within the formal Syrian military, one that could be critically threatening to Assad if internal conflict and additional defections were to occur. Additional losses in the way of air bases and logistical resources (like fuel depots and roads) will aggravate the regimes weaknesses on a nationwide scale.
With no substantive support from the West, the expanding liberation of the North from Assad’s military is a result of the effort and sacrifices of the people and armed opposition in Syria. Much less seeking to disable Assad’s air power through a no-fly zone, the West has failed to support the opposition in the way of low-cost armaments (e.g. FIM-92 Stinger anti-air missiles) or even drone strikes against war criminals (such as Assad’s Shabiha). Instead, the West had spent its time and resources towards organizing an intervention in Mali on the claim of removing threats to peace and stability[6], whilst openly neglecting to address Assad’s unprecedented crimes. In fact, by designating a key and publicly well-regarded participant  of the armed opposition (Jahbat an-Nusra)  a “terrorist organization”, it has even questioned the objectives and values of the Syrian people as they alone persevere and overcome tyranny. The Syrian opposition and public, must take the West’s damaging attitude and its record of inconsistencies into account, so as to ensure the country’s best interests and independence without any foreign intervention.

Mali and the Scramble for Africa